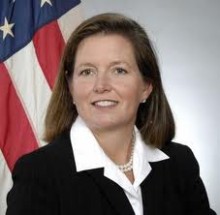 In January, the Federal Communications Commission approved, in a 4-1 vote, a landmark merger between cable and telecommunications giant Comcast and media and entertainment company NBC Universal. Though there were several strings attached — Comcast-NBCU had to cede daily control of Hulu and make stand-alone broadband service available to customers for $49.95/month for the next three years, for instance — observers generally agreed that the newly formed conglomerate would have massive reach and influence.

Now, Meredith Attwell Baker, one of the four FCC commissioners who voted in favor of the merger, has announced that she will be leaving the FCC next month for a lobbying job with Comcast-NBCU following the expiration of her current term. Baker, one of the two Republicans on the current FCC commission, will fill the role of senior vice president of government affairs. According to the New York Times, Baker will be forbidden by an ethics pledge she signed at the beginning of her term from “contact[ing] F.C.C. officials for the length of the Obama administration.”

As Ars Technica notes, Baker not only voted in favor of the merger, but defended Comcast from FCC attempts to impose further restrictions and conditions on the deal: “At the time, Baker objected to FCC attempts to impose conditions on the deal and argued that the ‘complex and significant transaction’ could ‘bring exciting benefits to consumers that outweigh potential harms.'”

Watchdog group Free Press was quick to denounce Baker’s speedy transition from government overseer to the former subject of her oversight: “No wonder the public is so nauseated by business as usual in Washington — where the complete capture of government by industry barely raises any eyebrows. The continuously revolving door at the FCC continues to erode any prospects for good public policy. We hope — but won’t hold our breath — that her replacement will be someone who is not just greasing the way for their next industry job,” it said in a statement.