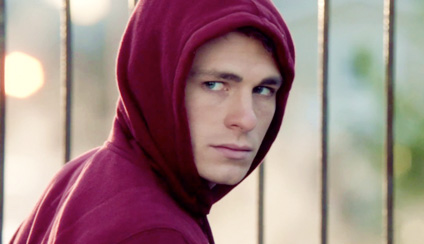 Just look at that Jackson smolder. Colton Haynes shocked Teen Wolf fans last year by announcing his resignation from the show in order to take a role on the CW’s Arrow as Roy Harper. He’s only made one appearance in an episode so far, as a purse snatcher and wily-con-man-when-he-needs-t0-be, but it shouldn’t be a surprise that he’s been signed to be a regular character in the show’s second season.

I admit that my interest in Arrow is likely directly related to how often it borrows from the lesser known characters in Batman’s rogues gallery, but the show’s attempt to tackle issues like PTSD of all sorts, class privilege, and vigilante morality keeps me interested. It’s not that it’s being particularly clever in the way it discusses such issues, but frankly the fact that it’s discussing them at all is impressive. The show is also something of an episode-to-episode game of “hey, it’s THAT GUY” for fans of science fiction on television, featuring, so far, two actors from BSG, two actors from Doctor Who, and an episode featuring Ben Browder of Farscape. It doesn’t hurt that the majority of the secondary characters in the show are either female, people of color, or both. No, really, the vast majority of the recurring secondary characters on this show are women. It’s also refreshing to see a show set in a fictional American city with a huge class divide recognize that in American society, a huge class divides almost always walk hand in hand with racial divides as well. I’m looking at you, Nolan’s Gotham.

So anyway, that’s what I tell myself when the dialogue on the show gets “roll your eyes right out of your head” dramatic and the acting bland.

Back to Colton Haynes. Entertainment Weekly reports that he has been promoted to a series regular for Season 2 of the show, which is unsurprising not only because it’s already been announced that his Roy Harper will become a love interest (or at least become love interested in) Oliver’s younger sister Thea, but also because Roy Harper is the secret identity of Speedy (later Arsenal), Green Arrow’s sidekick.

There was some hope, stemming from comments made by the show’s creators before its premiere, that Thea herself (nicknamed Speedy by her family) was being groomed for the role of Oliver’s sidekick, as a tribute to Mia Dearden, the second Speedy and probably the most prominent HIV positive superhero to appear in DC or Marvel. While I’ll still hold out some hope that Thea will get her shot at Speedy, Haynes’ confirmation as a recurring character complicates things. Perhaps Thea will wind up as the second Speedy after all.