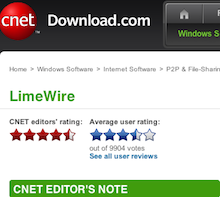 The site formerly known as Download.com is now a part of tech site CNET; CNET is owned by CBS Interactive; the site now known as download.cnet.com distributes now-defunct P2P client LimeWire, which received a court order last year to cease offering any file-sharing or search features. Being an ad-supported site, CNET profited by distributing over 220 million copies of LimeWire since 2008 — an estimated 95 percent of all LimeWire downloads — and since courts ruled last year that LimeWire was liable for inducing copyright infringement and failing to take “meaningful steps to mitigate infringement,” by the commutative property, CBS Interactive may have profited by encouraging copyright infringement.

Such, anyway, is the reasoning of a group of rappers and other plaintiffs who have sued CBS Interactive for “massive copyright infringement” this week.

The case against CBS accuses CNET of offering “videos, articles and other media that instructed how to use P2P software to locate pirated copies of copyrighted works and remove electronic protections placed on digital music files.” A 2009 LimeWire review, the suit noted, described the service as a “post-Napster clone” and gave it 4.5 out of 5 stars.

Among others, the plaintiffs include Detron Bendross, of 2 Live Crew, Trisco Smith-Pearson of The Force MDs and Eric Jackson and De’Angelo Holmes, both of the Ying Yang Twins. Alki David, a digital media entrepreneur, is also a plaintiff. They all assert their copyrights were illegally distributed on LimeWire.

CBS’ response was to come out swinging: The lawsuit is “riddled with inaccuracies, and we are confident that we will prevail,” it said in a statement.