Piston Cloud Key Fits The Cloud On a USB Drive 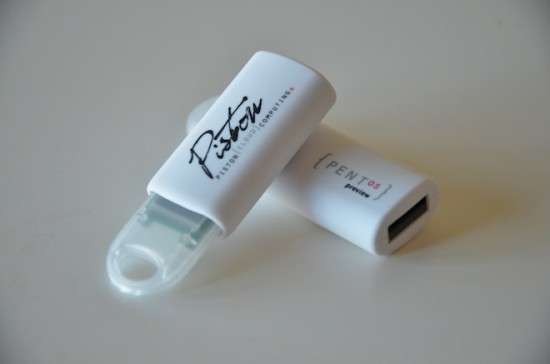 With a name like “the Cloud,” you sort of expect it to be something amorphous, nebulous, and hard to picture, much less something you can get your hands on, but thanks to ex-NASA engineer Joshua McKenty of Piston Cloud Computing, the cloud can be shrunk right down and crammed onto a USB drive. Kind of. Granted, the USB itself doesn’t contain terabytes upon terabytes of storage space and untold computing power, but it does provided access to those, in the form of a personalized cloud, if you jam it into the network slot on a server rack.

The idea is to make all the cloud configuration take place on the software side. What does that mean? Well, an IT Manager is able to plug a Piston cloud key into his computer and set the parameters for the cloud via CloudAudit, parameters like who has access, how much storage space it’ll have, how much computing power, etc. Then, after that’s all done and it’s plugged into the server rack, the PentOS, the software stored on the key, will boot up automatically, go about its business finding the appropriate servers to allocate, and generally configure the cloud according to the programmed specifications.

Aside from just being cool, it seem that one of the biggest advantages of the Piston cloud key is server security. By taking care of all the cloud configuration software side, it makes it a lot easier to limit the physical access to the servers. It makes it possible to limit that access down to a single person even, which is really helpful when you’re trying to figure out who spilled coffee on server rack B. The software the cloud key uses is worth noting too. CloudAudit, a standard that, while young, is gunning to become the standard for maintaining cloud behavior so that it complies with the Federal Internet Security Management Act and slew of other regulations.

The Piston cloud key is due to make its first big appearance at an OpenStack conference in Boston next week and the code behind the project has been open source for about a year already. It had its roots in the development of cloud use in the space agency and federal government that McKenty was working on back in his NASA days. Now, the Piston cloud key and PentOS is finally ready to take its first step into the world and help cloud computing evolve in an intelligent direction, giving customization control to the people who need it and keeping accident prone bodies away from the racks themselves.