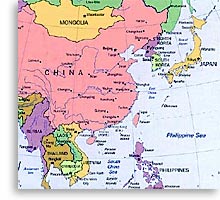 Everyone has seen this coming for some time now, but it’s official as of today: China is the world’s second largest economy behind only the United States.

The key data confirming the reversal came not from China, but from Japan, formerly the #2 economy in the world and now on course for #3: The Japanese government valued its economy at $1.28 trillion versus China’s $1.33 trillion. With a quarterly growth of 0.4 percent this past quarter versus China’s “remarkable three-decade streak of double-digit growth,” which is expected to hang on this year at ten percent growth, China’s seizing and keeping the #2 spot this year is all but assured.

Experts say unseating Japan — and in recent years passing Germany, France and Great Britain — underscores China’s growing clout and bolsters forecasts that China will pass the United States as the world’s biggest economy as early as 2030. America’s gross domestic product was about $14 trillion in 2009.

“This has enormous significance,” said Nicholas R. Lardy, an economist at the Peterson Institute for International Economics. “It reconfirms what’s been happening for the better part of a decade: China has been eclipsing Japan economically. For everyone in China’s region, they’re now the biggest trading partner rather than the U.S. or Japan.”