What’s Better Than a Chosen One? A Chosen Family. 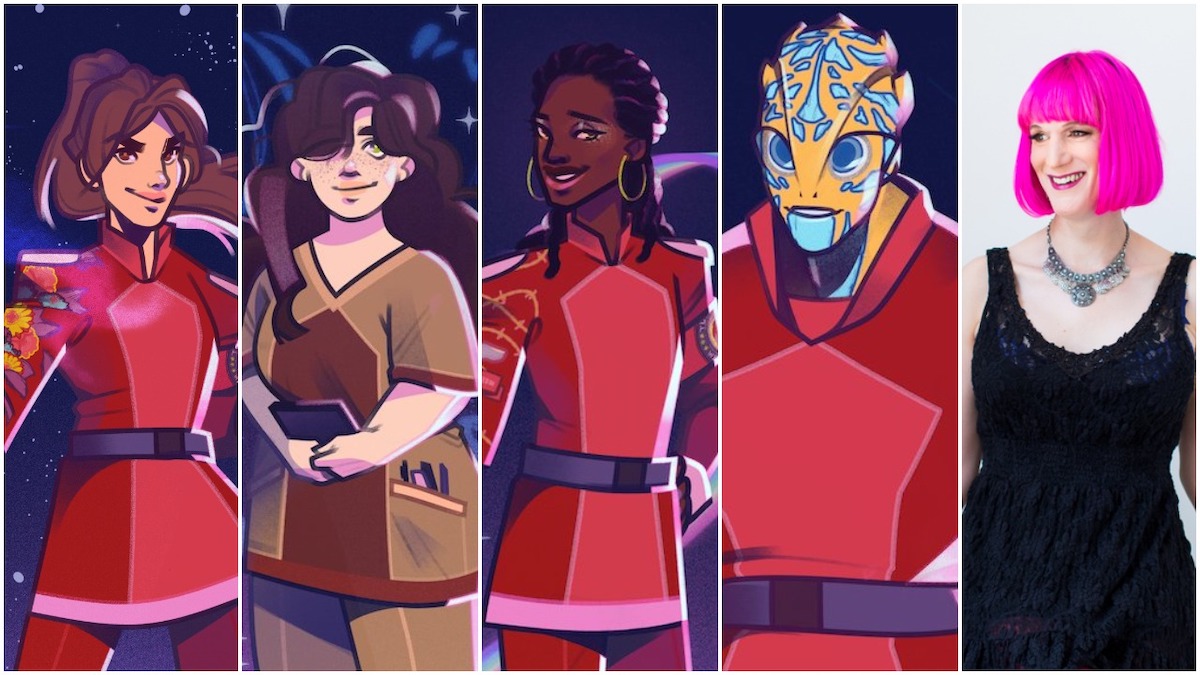 We’ve been drowning for years in “chosen one” stories, from Star Wars to Buffy the Vampire Slayer (not to mention the famous book series that I’m never mentioning again.) One solitary hero faces up to a massive destiny, along with a handful of supporting characters who hang back, do research, and obsess about the hero.

The appeal of this sort of story is easy to see: we all want to imagine being powerful, singled out for great things—and able to actually do something about huge, intractable problems that threaten our entire world. Most of the time in real life, we all feel helpless in the face of the massive systemic problems that are slowly killing us, so there’s a super-tempting dose of wish-fulfillment in the notion that one person could save us all.

And yet, there’s something a little bit toxic about one person—usually a White cis person—being singled out for a glorious destiny. This trope turns everyone else into a helper, and at worst it creates a situation where all of their lives revolve around the hero. This trope feels born out of ego, out of the need to be all-important and at the center of the universe. Not to mention, it maybe encourages an unrealistic notion of how change happens, along the lines of the Great Man Theory of History.

In “chosen family” stories, everybody supports each other and is there for each other. Teamwork rules the day, and everybody gets to shine. Nobody’s the special one, everybody is equally awesome and part of a crew of heroes. This concept automatically feels more queer and inclusive, and reflects the kind of found families that many of us have created to survive in a world that didn’t exactly offer us much in the way of safe-havens.

Note: I am by no means the first person to come up with the idea of “chosen family” as an alternative to “chosen ones.” I’ve seen it discussed online and in person over the past few years.

A lot of my favorite series have started off with a single special, only to expand the focus slowly, until they eventually became more of an ensemble show. But I love a book series, movie franchise or TV show that builds in the “everyone’s the main character” thing from the beginning—it’s the difference between Legends of Tomorrow and the other Arrowverse shows, for example.

I also love the concept of “switchkicks”—people who take turns being each other’s sidekicks—which io9 founder (and my real-life switchkick) Annalee Newitz explains in this tweet. As Annalee writes, we all need more switchkick stories in our lives.

Lately I’ve been talking and scheming about promoting a new subgenre which I call “comfortcore.” This is just what it sounds like: storytelling that provides serious, rugged, radical comfort. The past five years have served up more than enough trauma and nastiness and grimness, so I and many of my friends are not really looking for gratuitous, pointless darkness in our entertainment. (And the word “pointless” is important in that last sentence—if there’s a really powerful reason to dive into the pit of terrible experiences, then that’s different.)

A lot of my conversations lately about pop culture revolve around looking for stories that won’t reproduce the horrors of real life. Many people I know seem to crave escapism, but also just … kindness. I’ve personally been drawn to books like Becky Chambers’ Wayfarers series, and some of the other books on this list of comfort reads. Plus cartoons like Steven Universe, She-Ra, Hilda and Summer Camp Island and comedies like Schitt’s Creek. Star Trek: Discovery season three has also been a total happy place during a trying time.

The notion of gentle, friendly storytelling, which provides a refuge during horrendous times, feels like it’s intrinsically linked to the notion of families where nobody’s a sidekick. There’s just something lonesome and terrible about one person having to carry everything, not to mention all of our fates hanging on whether one self-absorbed person can get past their issues. Even though this formula usually leads to fist-pumping, guitar-shredding, walking-away-from-explosions, feel-good moments.

And meanwhile, the most comforting thing in a story is the dream of finding a place where you belong. A community that understands and supports you, in which everyone is valued equally. There’s immense warmth and goodness in the notion of finding your people, and getting the chance to be part of doing something worthwhile.

But what if there’s a way to create a synthesis between “the chosen one” and “chosen family”? Dichotomies are made to be exploded, after all. So why not have it both ways: create a family of chosen ones, in which everybody is special and has an awesome destiny—and together, they’re something even more kickass. That way, you get to keep all that juicy specialness and heroic destinytude and personal quest goodness, without turning one character into the special hero and everyone else into their side pieces—I mean sidekicks.

My young adult debut Victories Greater than Death starts out with a bit of the “chosen one” flavor, but slowly becomes more about a chosen family. Tina, the main character, is the clone of a fallen hero from another world, who was left on Earth as a baby, disguised as a human for her own protection. Tina will do anything to reclaim her heritage as the galaxy’s greatest champion—but over the course of the book (no spoilers), she realizes that she’s actually better off being part of a team where everybody is just as legendary. I wanted to pull the “chosen one” rug out from under the reader, and then wrap them in a nice warm blanket of belonging and mutual aid, instead.

When I was writing Victories, I wanted to include a supporting cast of human kids, who could leave Earth along with Tina. One of them is Tina’s best friend from Earth, Rachael—who starts out maybe feeling like a sidekick, but quickly starts carving out a space for herself as a leader in her own right. As for the other four Earth kids on board the starship Indomitable, I struggled with how to make them the heroes of their own story, rather than an accessory to Tina’s. In the end, I decided it hinged on two things: They each have their own reasons for leaving home, and they each have their own goals and quests, and reasons why they’re special and have an important destiny.

That choice, to try and give each character their own quest and their own agenda from the get-go, wound up making the sequel to Victories a lot more interesting to write—because now, each of these six characters is chasing their own dreams and dealing with their own challenges, though (of course) they’re all still a family and everybody helps everybody else. By the start of the second book, there’s not really a main character anymore.

So hey, let’s not have any more “the weight of the world is on my shoulders” angst from the one hero who has to fix everything single-handed. You know where the weight of the world belongs? On everybody’s shoulders. There’s a lot of weight to go around, after all, just like there are enough heroic destinies and astonishing powers for absolutely everybody. It’s easier to hold each other up and take care of each other when every one of us is marked by fate and chasing a shining dream of greatness.

Charlie Jane Anders is the author of Victories Greater Than Death, out now—see her in conversation with Holly Black tonight. She’s also the author of Never Say You Can’t Survive, a book about how to use creative writing to get through tough times, coming in August. And an upcoming short story collection coming in November, Even Greater Mistakes. Her other books include All the Birds in the Sky and The City in the Middle of the Night. With Annalee Newitz, she co-hosts the podcast Our Opinions Are Correct.

Want a signed copy of Victories Greater Than Death and the chance to help independent bookstores? We’ve got you covered.