A story about a boy and his dog 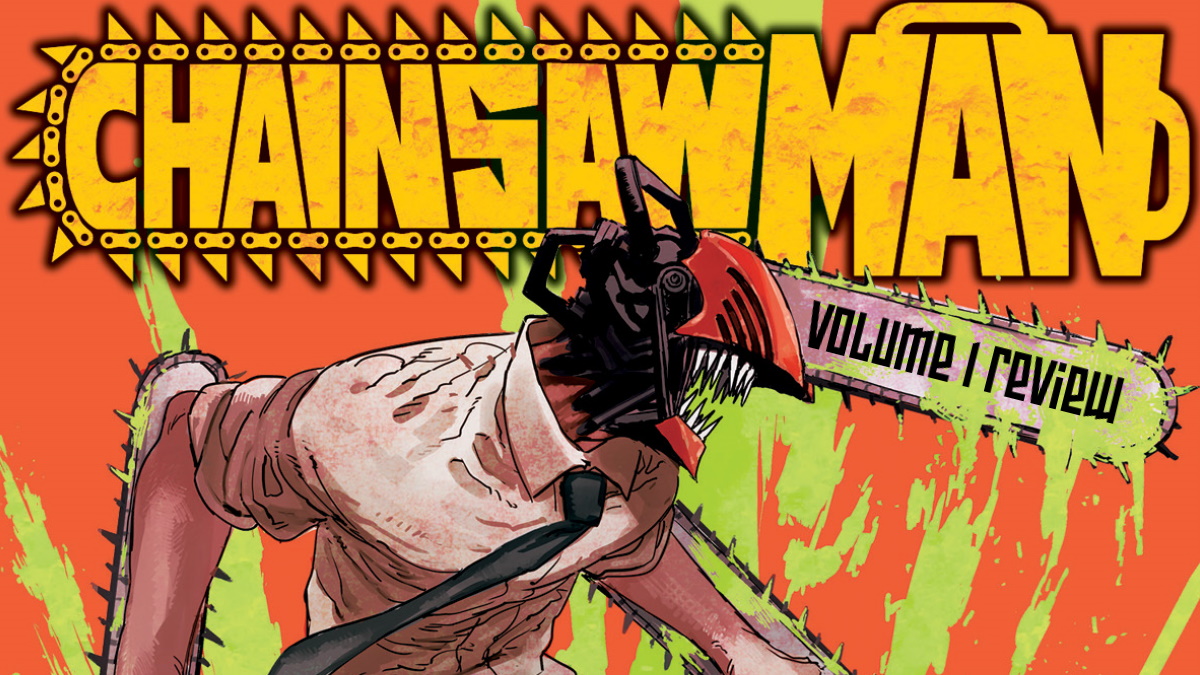 Yes, hi, and hello, it’s time to talk about Chainsaw Man, a series that truly embraces the bombastic uniqueness of manga. I’d heard about this series back when the anime was announced, and like most popular series I’m late to the party on, I watched anitwit (anime Twitter) collectively lose its shit—in a good way. Folks were THRILLED to see this series getting an anime adaptation, especially since MAPPA was gonna be the studio behind it.

After reading the first volume (actually, the first chapter) I immediately understood the appeal of this series, so time to grab a slice of bread, put some jam on it, and curl up with a chunky chainsaw pup. 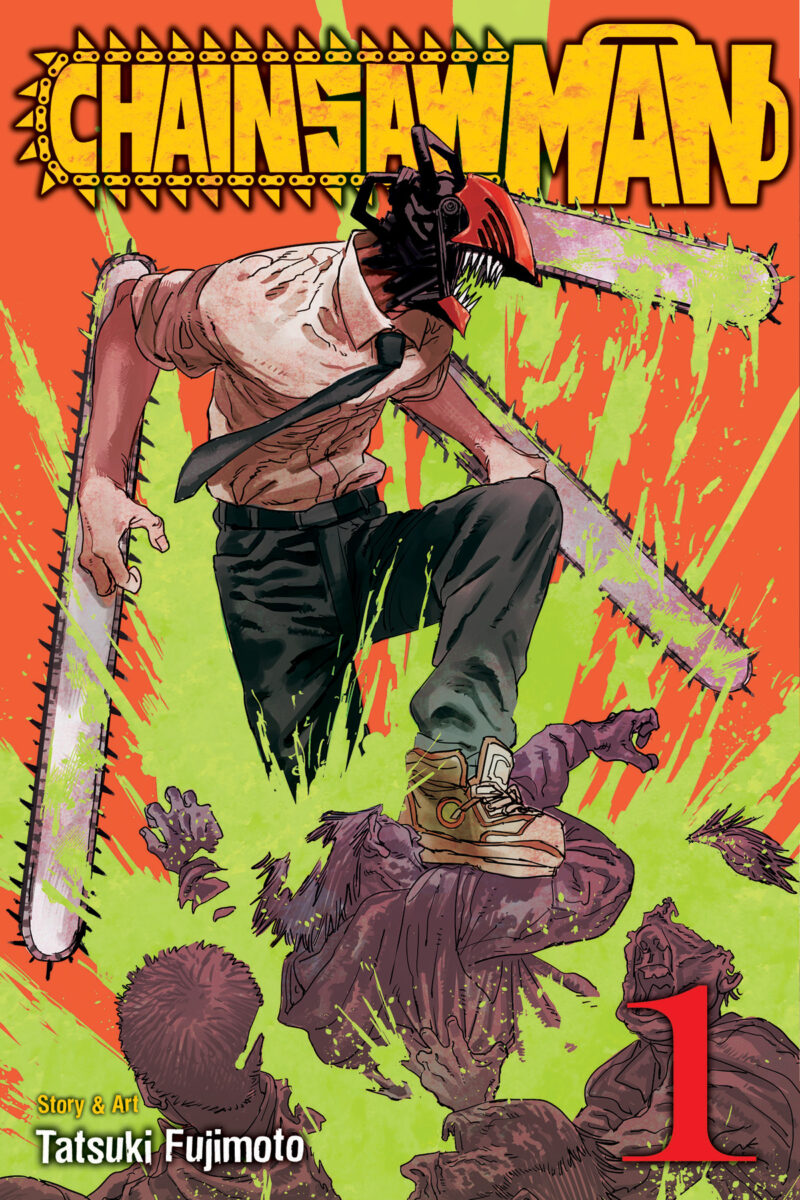 Denji’s a poor young man who’ll do anything for money, even hunting down devils with his pet devil-dog Pochita. He’s a simple man with simple dreams, drowning under a mountain of debt. But his sad life gets turned upside down one day when he’s betrayed by someone he trusts. Now with the power of a devil inside him, Denji’s become a whole new man — Chainsaw Man! 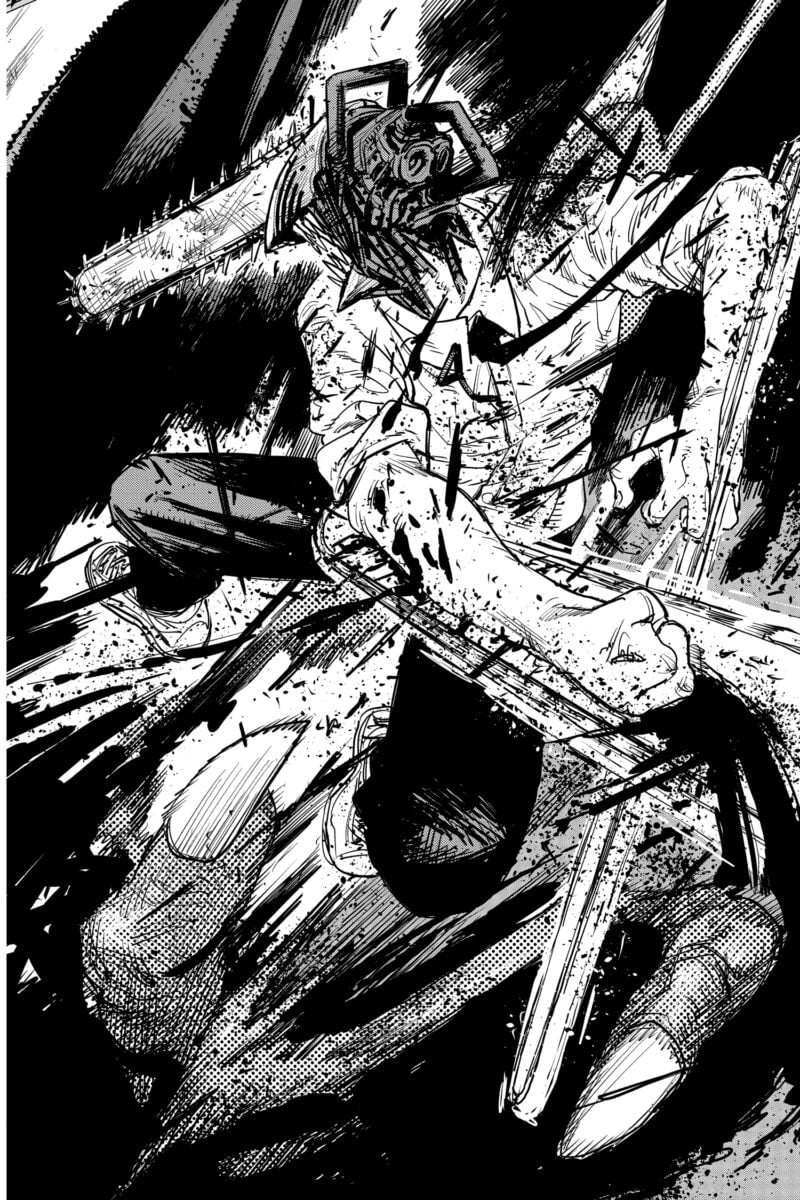 This manga doesn’t waste any time throwing you into its bizarre premise. In the first few pages, you’re meeting Denji, Pochita, and a world infested with devils. Denji is the poster boy for “my life is a heaping pile of shit,” but like most loveable manga protagonists, he still tries to have a positive outlook because, well, a guy can dream, right? You, the reader, know that there’s no way he’s gonna pay off this debt, but he simply continues to calculate what other parts of himself he can sell and how many devils he’d have to kill until he’s free of it.

For an extra dose of heartwrenching, the debt isn’t even his fault!

You really just want Denji to win, especially since the things he wants are so simple. He’s not asking for much, but every time it feels like he’s taken a step forward, there’s someone ready to take advantage of him. 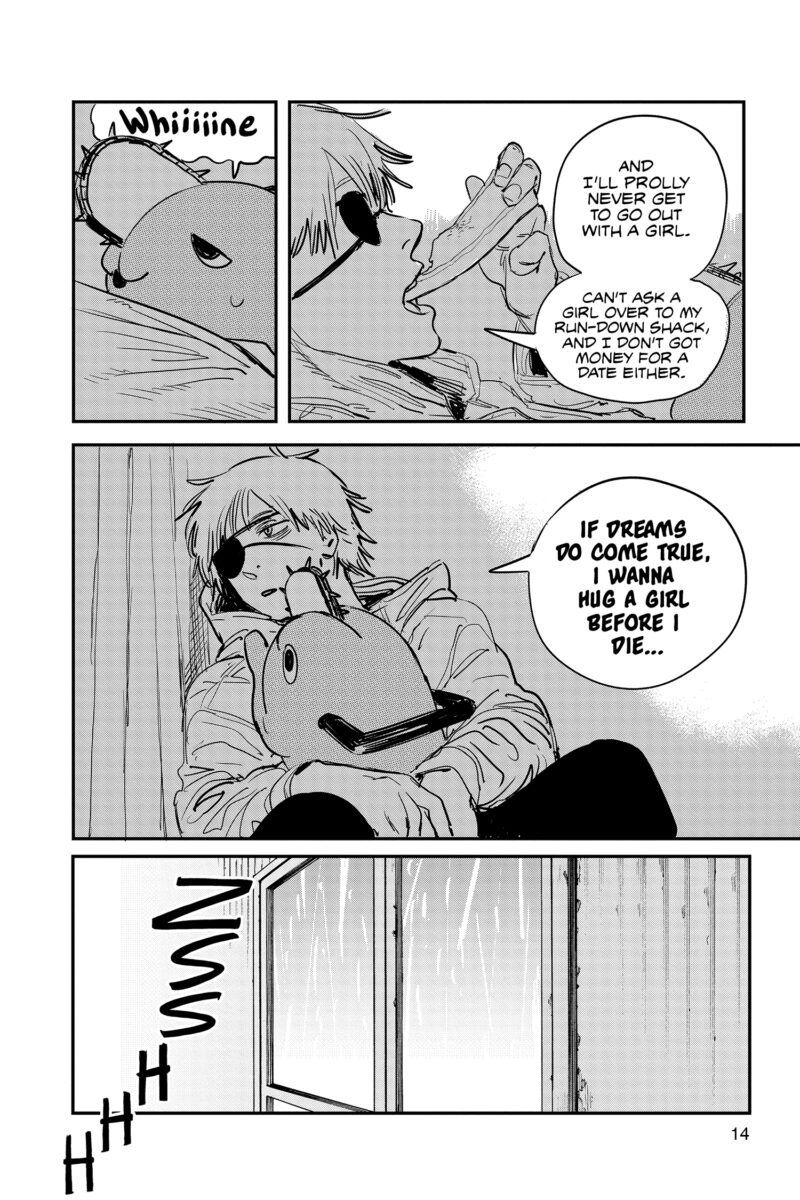 This would be an ordinary story of a downtrodden main character if not for the extremely bonkers premise, which, honestly, kicks in way faster than I thought it would.

Denji becomes Chainsaw Man in the very first chapter. Let me just go ahead and state the obvious: HOLY SHIRTBALLS this manga is BRUTAL AF! The image of Denji becoming Chainsaw Man and shredding through his adversaries is disgustingly gory, and I absolutely LOVE it. The birth of Chainsaw Man is tragic, like every aspect of Denji’s life, so watching him decimate everything around him is the very definition of bloody satisfying. Like. These MFers couldn’t even let this boy DREAM of a life where he could have a slice of bread with jam and play video games with a girl? 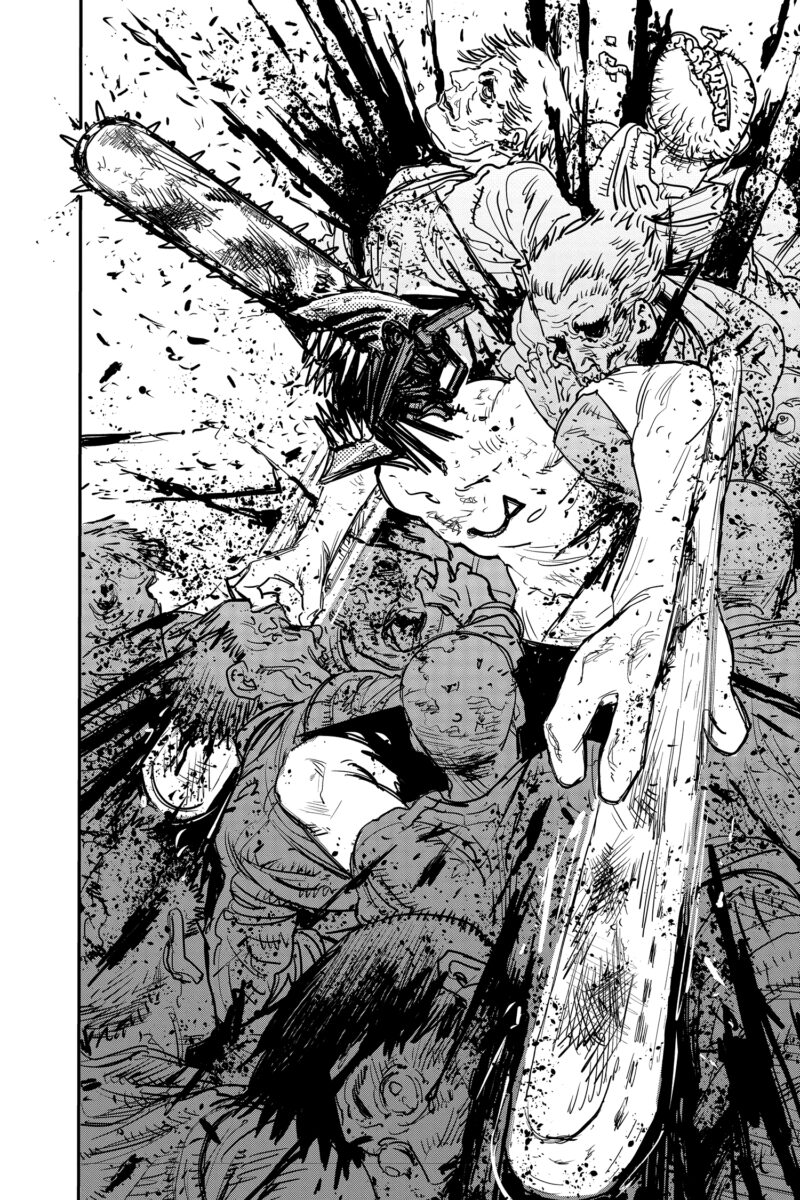 The rest of the manga is Denji getting used to a life where he can pull on his puppy’s tail like a chainsaw cord and transform into a buzzsaw menace. Well, that’s … kinda what it’s about. Yes, being able to transform into a chainsaw-headed badass is a LOT, but at its core, the manga is about Denji adjusting to having… things. Basic things, too. In a story as violently over-the-top as this, the heart of it all focuses on simple joys like finally being able to eat some cold udon.

It’s an interesting contrast to the bigger picture at hand, namely, the world being full of devils, the group that’s tasked with killing them, the team within the group that’s using fiends to fight devils (fiends are devils who have taken over a human corpse), and Denji’s place in that group since he’s walking the line between devil, fiend, and human. 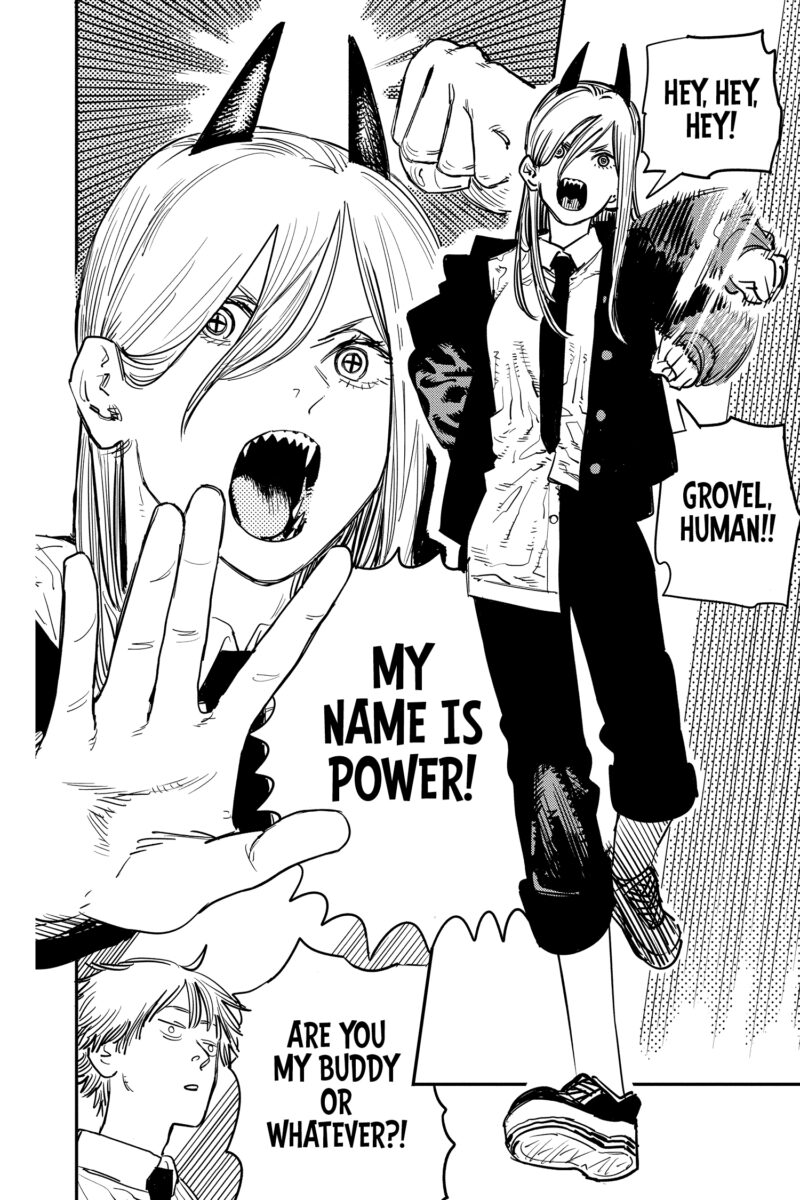 These major plot points are going on around Denji, but he’s just happy to have clean clothes, a working toilet, and the opportunity to touch a boob.

And, weirdly, I want all of that for him. Even if there are much bigger things going on (and the characters around him do bring that up) I really just want this kid to touch a boob. That’s not just because his life before joining the devil Hunters sucked, but it’s also because you KNOW this group is using his lack of self-worth to their advantage. They now have access to a never-before-seen hybrid of devil and human with Denji, and all they have to do is give Denji a bed to sleep in and he’s good to go.

Ugh. Denji deserves so much better, at the same time, I can’t deny that this is a solid definition of better for him considering his previous circumstances where he’d put a lit cigarette in his mouth for money.

That’s … really depressing to think about.

I do imagine, however, that the other characters around Denji will start to warm up to him and help him realize how valuable he is as a person, not a chainsaw at the ready. I also imagine there will be a lot of questions about what makes someone human. This isn’t just with Denji, but with Power (the fiend he gets paired with) and even Aki (the human Denji is first partnered with). I’m on the fence with Makima (the one in charge of Denji’s group) because she is clearly using his simplistic needs to her advantage. She REEKS of ulterior motives. 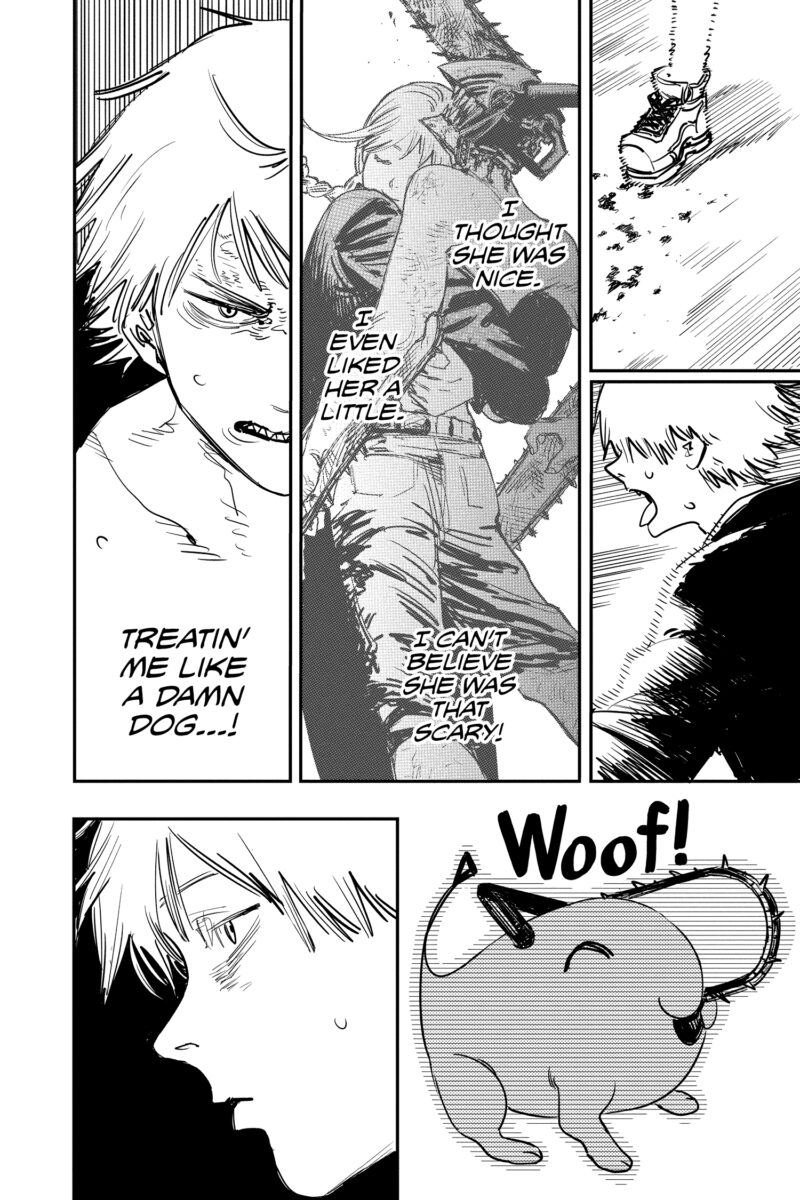 It’s another example of how sad Denji’s life has been since all Makima has to do is show him a little affection for him to agree to what she wants. However, I feel that this can only work for so long, after all, Denji did make mincemeat out of an entire room of devils who’d pushed him too far.

In the end, this is not the story I expected to get attached to, but Chainsaw Man is a creatively gruesome series with a likable, relatable lead, and an interesting universe that begs the question, “What makes something devilish?” 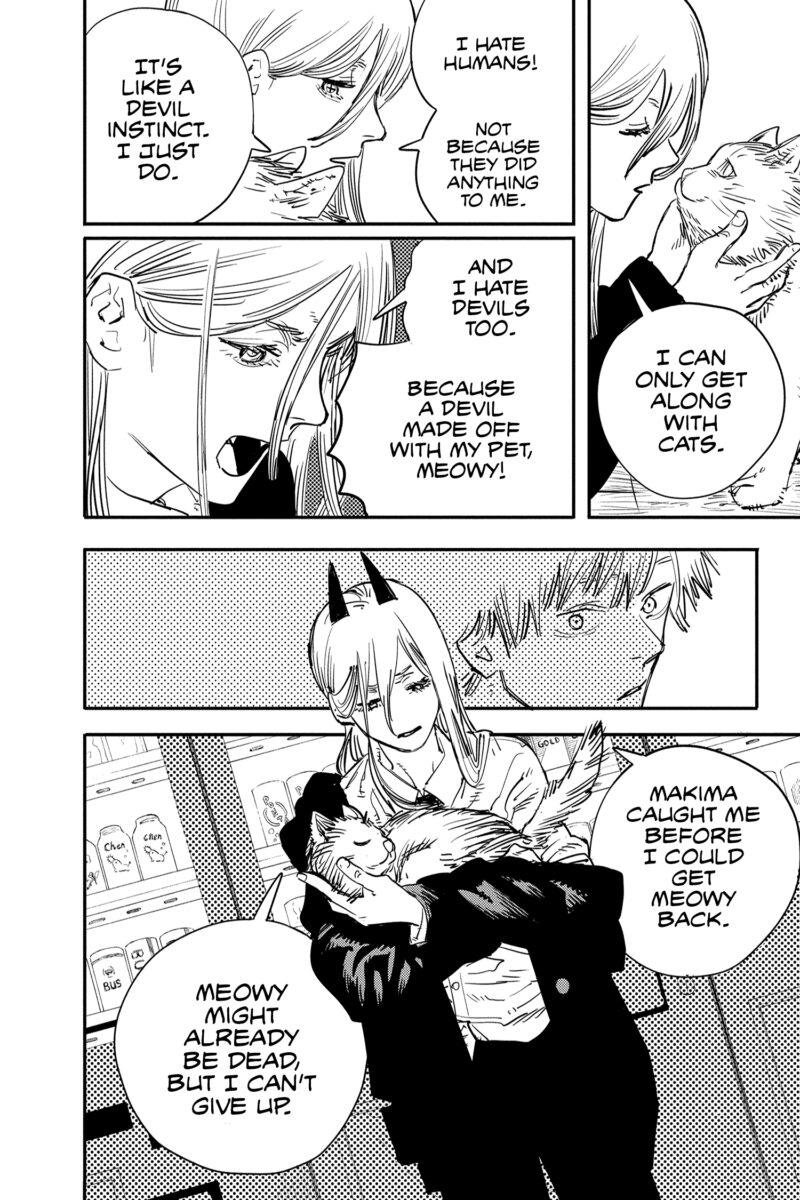 I mean, if you think about it, the ones who have hurt Denji the most (so far) are humans (since he was led to that devil ambush at the beginning BY humans).

I swear manga will always and forever amaze me with how it can make you feel so much for a character who can make chainsaws pop out of his body thanks to his devil dog.

You can check out the first volume of Chainsaw Man over at Viz’s website.

If you’re already caught up cuz I’m a late devil pup, you can check out the series page right here.