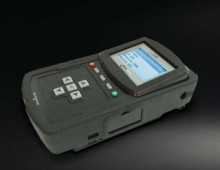 The American Civil Liberties Union (ACLU) is currently engaged in a war of words and requests for information on a device used by the Michigan state police that can extract information from cellphones. The device, which has reportedly been in use since at least 2008, is apparently being used by the police during minor traffic violations.

The device, called the Cellebrite UFED, has been tested by the Department of Justice which reported the device was capable of pulling all photos and video from an iPhone in under a minute and a half. Cellbrite says their devices also can extract, “existing, hidden, and deleted phone data, including call history, text messages, contacts, images, and geotags.” It can also extract your highly incriminating ringtones. These devices can also circumvent password protection, and are reported to work on over 3,000 cellphone models.

Understandably, the ACLU has voiced concern that the device breaches the protection against unreasonable search and seizure guaranteed by the 4th Amendment of the U.S. Constitution. The argument that innocent people have nothing to hide is, to my mind, insufficient against a device that cannot distinguish incriminating data. From the information provided by manufacturer, an officer would need to sort through the data piece-by-piece on a computer. Meaning that during a short traffic stop there seems to be little chance that police would be able to find useful information. Moreover, even an innocent person would likely have qualms with a stranger, police officer or not, pawing through their personal information.

Furthermore, one wonders how officers would have time to sort through reams of this information.

Though these devices are certainly valuable during investigations, the risk is that indiscriminate uncessarily exposes the information of private individuals. Interestingly, the ACLU’s attempts to determine how the device is being used in the field have met with spectacular opposition from the Michigan police. The ACLU has filed Freedom of Information Act requests about the device, detailing the use of the device. A FOIA request generally compels the recipient to respond with all non-sensitive information. The police have responded by requesting $544,680 in exchange for the information.

Perhaps the most unfortunate result of using this device is that it will almost certainly increase public distrust toward law enforcement officers. Though the Michigan police likely have the best of intentions at heart, their apparent unwillingness to reveal how these devices are being used certainly does not bode well. It’s an unfortunate note to end on, but those driving in or through Michigan should probably educate themselves on their rights.

(The Newspapers via Slashdot)