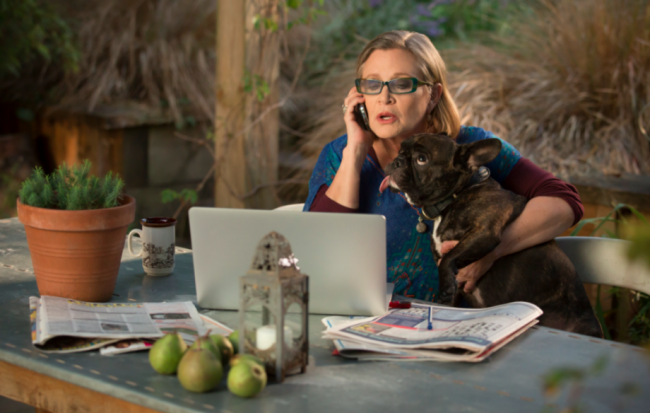 Of all the Emmy nominations announced today, there’s one that’s giving us an overload of emotions. Carrie Fisher has received a posthumous nomination in the category of Outstanding Guest Actress in a Comedy Series for her role on Amazon’s Catastrophe.

If you haven’t seen Catastrophe, I highly recommend remedying that as soon as is humanly possible. It’s a super bleak rom-com written by and starring Rob Delaney and Sharon Horgan, about a one-week stand resulting in an accidental pregnancy. It’s one of the darkest, funniest, most heartfelt shows of the last few years and if you haven’t yet watched it, I’ll warn you now: you will be disappointed by how quickly it’s over. (Damn you, short British series seasons!)

Carrie Fisher guest-starred as Delaney’s less than tactful mother. And look, she even kept Gary at her side! (Video NSFW work f-bombs.)

She passed away before the third season aired, making it her last TV role, and completely heartbreaking to watch. Horgan told THR before the season dropped, “It was such a shock to lose her and so unexpected and so awful, that all we had was her performance in episode six to think about and spending time working on that and finding the best way to showcase what we thought was a really beautiful and funny and heartfelt performance from her. So, that’s what we concentrated on: making that episode a dedication to her, I guess, and beyond that, no, because it’s hard watching her onscreen so alive and yet no longer with us.”

The news of her nomination just ripped the band-aid off of the still very raw wound her passing left in so many of us.

Honestly have read that more than once and thought, “Wait, why does it say ‘posthumous’?”

Very happy and sad and proud and messed up and delighted about our friend Carrie Fisher’s nomination @robdelaney @catastrophe_tv https://t.co/BfYHVGjWW8

This is Carrie Fisher’s third Emmy nomination, after her guest appearance on 30 Rock and her one-woman show Wishful Drinking.