Interview: Carrie DiRisio of Brooding YA Hero on Why We Need to Take YA Fiction Seriously 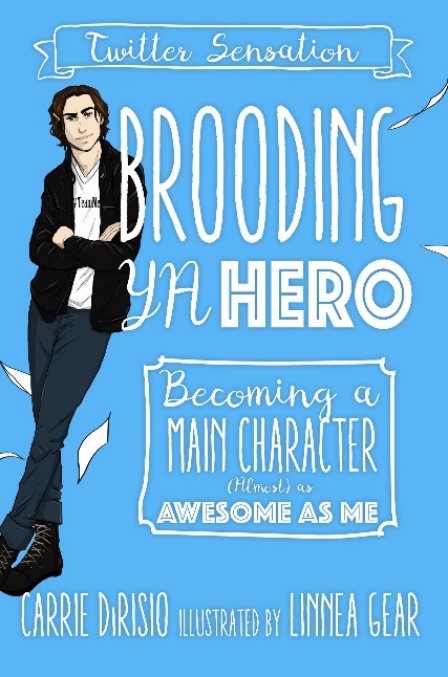 I had the opportunity recently to read Brooding YA Hero: Becoming a Main Character (Almost) as Awesome as Me, a “self-help” guide full of quizzes, activities, and examination of YA tropes all from the perspective of Broody McHottiepants, the male hero we all know and love. Sometimes he’s a paranormal creature torn by his monster-ness (while, of course, still being devilishly handsome). Other times, he’s the school bad boy who cares, but only really deep down inside. Whatever the surroundings, you know a Broody when you see one.

Born from one of my favorite Twitter accounts, we see the dense Broody embark on a journey to write a book, with occasional appearances from his evil ex, Blondie DeMeani. You know, the evil girl who doesn’t like to read, enjoys makeup, and is generally demonized for having a personality? On the way, he also interacts with his underwritten best friend and other YA tropes, making Brooding YA Hero a humorous and way-too-true read for all YA fans. Through Broody, Carrie DiRisio dives into the many tropes of YA, both good and bad, for a guide that’ll make you a YA hero—both because and in spite of Broody’s … Broody-ness.

Over email, I asked DiRisio what she thinks of these male Broodys, why they continue to exist, and why we need to start taking YA as a genre seriously.

There’s something insufferable about these Broody McHottiepants, but they’re also really persistent characters. What is it about that phenomenon?

Well, Broody would argue it’s because he’s the most handsome character ever, and clearly the most deserving … but I’ll blame the patriarchy.

I do think that there’s sort of a layer cake of wish fulfillment and internalized acceptance of dude-mediocrity within a lot of Broodys.

We’re told, since the time we’re little and watching Disney princes lie/flirt/smirk their way to success that women should love and accept any male love interest—ESPECIALLY the bad boys. It ties into the narrative we see over and over of a “good” girl who magically “fixes” a bad boy with her love. Plus, we’re used to seeing the “scoundrel” guy succeed. We see him in far more books, comics, and movies than we ever see a “bad” or “unlikable” girl succeed.

A game I like to play is to find any story with a male lead, flip the genders, and try to pitch it to friends. 9/10 times they’ll say that it’s unbelievable or that the “main female character” would never act like that. I mean. Just imagine a genderswapped Wolf of Wall Street or The Great Gatsby (Both with men that we wouldn’t necessarily call “heroes” but we would certainly call protagonists). As awesome as I think both of those would be, I do have to say, they probably wouldn’t be smash hits.

So, TLDR: Male Brooding YA Heroes exist because of the persistence of the redemption narrative, as well as the general overall “default” protagonist being an allosexual cishet white dude.

Thankfully my POV chapters include how much I secretly love the main female character. That way I can be a jerk to her in all her chapters.

Tell me about how the Twitter Brooding YA Hero first started and when that turned into a book idea.

It started with wine and too many YA books binged in a row. Basically, it was an inside joke between me and a few friends that ended up really resonating with a lot of Twitter folks.

As I got to know Broody through his tweets, I realized that he really needed a whole book to contain his ego.

Your book addresses the tendency within the literary scene to disparage the YA genre. Why is YA so important and something to take seriously?

First of all, I think it’s important to note that YA is much like teen pop and romance novels in that it is partially disparaged simply for being very popular with women, and especially, young women. There’s a line of thought that “girly books” are fluffy and silly, and can’t be as “important” as the (usually written by white men) classics.

You see it a lot when critics compare all YA to Twilight. If you follow YA at all, you know that YA now includes brilliant, powerful books like Angie Thomas’ The Hate U Give and S.K. Ali’s Saints and Misfits. Even YA’s scit-fi and fantasy books have diversified, with incredible books like Cindy Pon’s Want and Dhonielle Clayton’s The Belles.

So, yes, sparkly vampires exist in YA, but we have a WHOLE heck of a lot more going on.

That aside, I think YA is incredibly important because it is written for teenagers. YA books (hopefully) allow teenagers to meet characters both unlike and very similar to themselves (although we have a lot of work to do on the whole “making sure there are characters that accurately reflect readers” front). Fiction can be a great place to learn so much about empathy, about yourself, and about how to navigate the confusing world known as real life.

I’ve mistreated every woman I’ve dated before you.
But! You’re a main character, so I’ll be nice to you.
You don’t mind my past, right?

I think I’m in love with Blondie DeMeani. Can you tell us more about forming her character and why we love the Blondies (as an aspiring Disney villainess)?

Because they’re the girls who get to do what we wish we could!

Blondie, in short, came from reflecting on those tropes found in YA literature. It was amazing, when I started really digging into Broody occurrences, how often he needed an evil ex-girlfriend to establish his character. She was always beautiful to prove he was capable of attracting beautiful people, but she also had to be evil, to make it easy for us to root for the heroine.

Plus, I think our society often tells women that in order for us to succeed, we have to put down other women. So, I wanted to write a character that made readers think a little bit about just what it means to be the “evil” ex.

As for the aspiring Disney Villainesses, I have to share this amazing piece on Tor.com that sums up their appeal better than I ever could.

Who are some of your favorite Broodies in media and fiction?

Sorry. I’ve been a Han fangirl since I was five. I just adored his lazy drawl, his confidence, and his character arc, changing from a selfish jerk to a sap in love. (And no, I don’t know what this “Han Solo” movie people speak of is. It sounds as non-existent as that rumored “fourth Indiana Jones movie.”)

Aside from Han, I normally try not to name actual Broodys in case the author in question is offended. But I will say, A LOT of my favorite characters are those dashing bad-boy types.

Gosh, I sure am glad that one beautiful white cishet lady character did something badass once.
Now, we can say it’s a feminist story.

The book takes a lot of time to point out the problematic tropes in YA from body diversity to race, but it also feels like a story about how great YA can be when done right. Was that tough to balance?

SO tough. I always stress to people that not all tropes are problematic. Some tropes are incredibly helpful to tell a cohesive, tight story. And yes, problematic tropes exist in YA books, but there are also amazing, life-changing YA books out there.

In regards to the challenge, I’m so very grateful to my critique partners, sensitivity readers, and fearless editor! It was truly a team effort.

My book has diversity! It has me (a white dude), my girlfriend (also white), a supporting all-white cast…and one POC character who dies.

The book is just as much for writers as it is for readers. Can you talk a bit about how the how-to format lends itself to both “becoming a hero” and “writing a hero?”

Well, I think writing is an incredibly heroic act, right? At least Broody would say so. The book does detail just how difficult a time Broody had learning how to write. I think Broody would rather skip prom than attempt to write another book. It was hard work for him!

I suppose that might be the key. Pursuing your dream, whether it’s learning to knit or writing a book, is a heroic quest. Achieving it makes you a hero.

Is there anything else that we should know about the book?
That it’s illustrated by the amazing Linnea Gear! Linnea is a talented artist with a great webcomic (dissent-comic.tumblr.com), and her illustrations really make the book come alive!