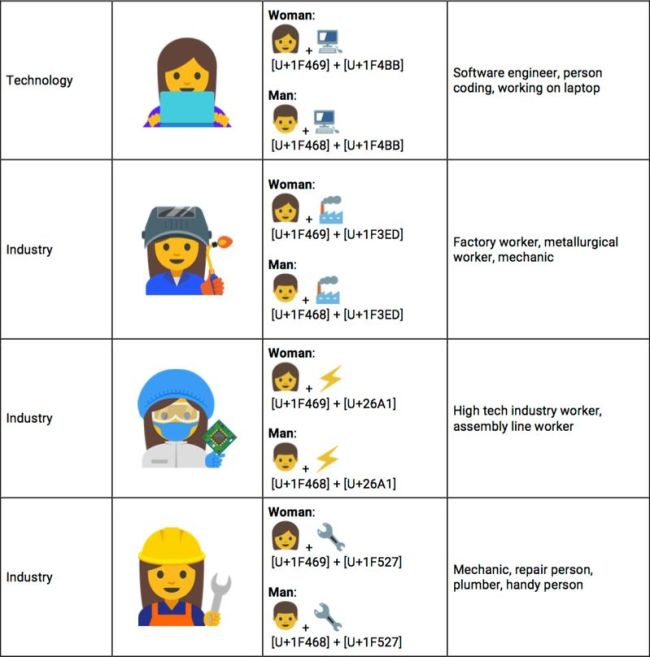 At the moment, your emoji options include a handful of careers: police officer, construction worker, detective. Last year, many of these emoji got updated to include more racially diverse options. When it comes to gender diversity, though, the emoji set could still use a lot of work. The line-up of career-themed emoji doesn’t depict any women as police officers; instead, the ladies get roles like “bride” and “princess.”

Here, let me just show you — these are the emoji that appear by default on my iPhone.

There isn’t very much career diversity there, either–although it’s definitely nice to see “Daredevil” reflected as a viable career (I kid, I kid). Anyway, Google seems to have noticed the discrepancy here as well, and a team has recently proposed a new set of emoji featuring lots of different careers. The new set has both long-haired and short-haired emoji versions of every career. Short hair vs. long hair is the only way that emoji depict the gender binary, and although it’s reductive as heck, at least it’s not eyelashes and/or pink hair-bows.

The picture at the top of this post depicts four of the new proposed emoji, but those aren’t the only ones! The team of four Google employees plans to introduce 13 career-based emoji to the Unicode Consortium; their proposal (and all of their emoji) are available to view online. If the emoji end up getting the green light, then they’ll be included as an official expansion to emoji sets.

Apparently, one of the new jobs is “rock star,” and that will include a David Bowie homage, which means there’s an emoji wearing this makeup (it’s on page 8 of the proposal, and it’s adorable). Might be tough to decide whether or not your emoji should have short or long hair to accompany that look, though!

(via The Verge, image via Unicode Consortium)