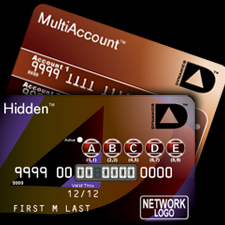 At the DEMO conference this past week, a conference which showcases emerging technology, startup Dynamics, Inc. won first prize and the people’s choice award for their new Card 2.0, a credit card that can rewrite its magnetic stripe with the input of a code on buttons as thin as the card itself, combines multiple bank accounts onto a single card and can hide its own numbers. Check out a video demoing two of the cards after the jump.

The first card shown in the video is the MultiAccount card, which has the ability to tie multiple bank accounts onto one card and rewrite the magnetic stripe based on which account is chosen for use with the press of a button. The second card shown is the Hidden card, which has a little display that hides part of the credit card’s number and keeps the magnetic stripe clear of information until the user enters a personal code via the card’s buttons on the face. The CEO also boasts that the cards are “completely waterproof and scratch-proof.”