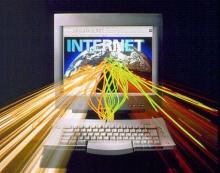 A team of computer scientists, engineers, and physicists from Caltech and University of Victoria have broken the speed record for a sustained , computer-to-computer transfer over a network, at 186 gigabits per second. The transfer was completed over a distance of 134 miles, between the SuperComputing 2011 convention in Seattle and the University of Victoria Computer Centre in Canada. Whereas other transfer records are much higher, this transfer record was set with commercially available components.

The 186 gigabits per second wasn’t just a one-way transfer, as the data was being sent in both directions over a 100Gbps bidirectional link, sending 98Gbps in one direction and 88Gbps in the other. Rather than some crazy combination of private fiber optics, the team that set the record used a commercially available 100Gbps link.

Caltech used a combination of 13 computer servers, which had solid-state drives and 40Gbps LAN connections, while University of Victoria used 10 Dell servers, which had 10Gbps ethernet links and six solid-state drives each. The team was able to hit a disk-to-disk transfer of 7.5 gigabytes per second, but the 186Gbps record — roughly 23.25 gigabytes per second — was memory-to-memory. The record transfer was sustained for around 11 hours.