Calm Down, Nerds, You’re Getting Your Back To The Future Shoes This Year 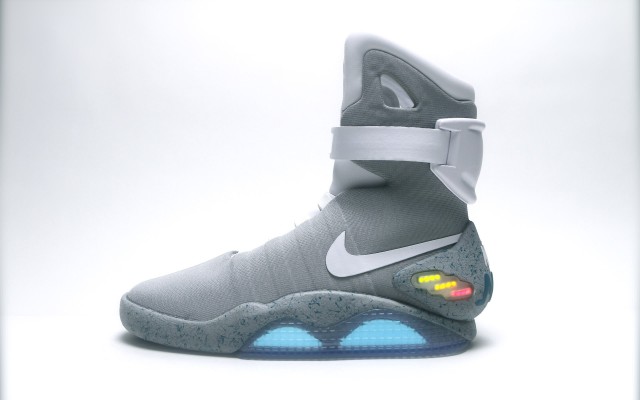 Yes yes, we know, the year is 2015 and you were promised a hoverboard and power laces and instant pizzas. Well, the world is not a movie starring Christopher Lloyd, and you have a computer thats more powerful than the stuff we used to send rockets into space currently making a dent in your back pocket, so simmer down. But hey, at least you’re probably getting those rad shoes this year, right?

Back in the late ’80s, Nike produced a special shoe specifically for Michael J. Fox to wear in the Back to the Future sequel, in which Marty McFly travels from 1985 to 2015 (you know, because something has to be done about his kids!). The Nike MAG was never intended to be sold to a wider audience, but years later, original designer Tinker Hatfield announced plans to redesign and mass produce the shoe. In 2011 a limited series of 1500 MAGS were auctioned off to benefit the Michael J. Fox Foundation for Parkinsons’ Research.

Now it’s expected to hit the market again for a 2015 release, which Hatfield talked about recently at the Agenda Trade Show in Long Beach, Florida. While he can’t confirm the exact date what we can expect our shoes to arrive, Nike Kicks reports that he told the crowd there are “11 and two-thirds months left in 2015.” It’s probably worth waiting for, though, because this edition will definitely have that power lace technology we first saw in the film, according to an interview Hatfield did last year. Come on, that’s pretty awesome. Probably cheaper than a hoverboard, too. Don’t say consumerist nostalgia never did anything for you.