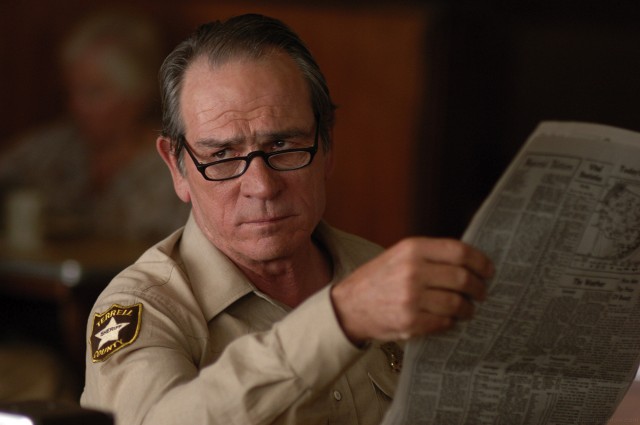 An image from Tommy Lee Jones’ indie film, No Country For #NotAllMen

You know, for a loosely defined group who’s constantly claiming they don’t have nefarious purposes, they sure do like casting themselves as the villain.

Also, for a loosely defined group who claimed to rail against those with an “agenda” they SURE DO HAVE A CLEAR AGENDA.

Taking place this weekend, Calgary Expo (who The Mary Sue joined forces with for a cosplay contest this year) has a great stance on harassment and bullying. From their FAQ:

The Comic & Entertainment Expo Committee does not tolerate harassment of any type at any of its events. Harassment can take many forms. It may be, but is not limited to, words, signs, offensive jokes, cartoons, pictures, posters, e-mail jokes or statements, pranks, intimidation, physical assaults or contact, or violence.

They also have a campaign going called #ExpoEquality, in cooperation with Calgary Communities Against Sexual Abuse.

The convention also has large signs indicating that neither verbal nor physical harassment will be tolerated, in addition to the #ExpoEquality and “Cosplay is not Consent” signage. Unfortunately, none of that prevented this from happening.

A Gamergate affiliated group known as Honey Badger Radio procured a booth for Calgary Expo through a crowdfundng campaign specifically geared toward gaining attendance under false pretenses. The people representing them are Karen Straughan, Mike Stephenson, Alison Tieman, and Sage Gerard, and of their campaign they wrote:

In April of this year, the Honey Badgers plan to put on a booth at the Calgary Comics and Entertainment Expo! We plan to infiltrate nerd culture cunningly disguised as their own. Each of us has been carefully crafting a persona of nerdiness through decades of dedication to comics, science fiction, fantasy, comedy games and other geekery, waiting for this moment, our moment to slip among the unaware. Once there we will start distributing the totalitarian message that nerd and gamer culture is… perfectly wonderful just as it is and should be left alone to go it’s own way.

As men’s issues advocates and defenders of creator’s rights to create unmolested, that’s what we have to say to the nerds and geeks and gamers. You are fantastic as you are, carry on.

Yep, in today’s political climate that’s considered an extremist position. Just letting creative communities create; consumers consume what they want; and gamers get down to the business of vidya without being judged.

So if you share our vision of a world in which nerds and geeks and gamers roam free and unfettered, help us spread that message by throwing a few shekels our way to attend the con.

However, Honey Badger Radio did not use their website to apply for vendor/exhibitor status. The “Honey Badger Brigade” on the Calgary Expo website links to a webcomic site (run by Honey Badger Tieman) instead. If you didn’t think all of this was enough to warrant expulsion from the convention (it is), there’s more.

Their show is broadcast by A Voice For Men, one of the biggest men’s rights website on the internet. Less specific plans for Calgary Expo were also detailed on that group’s site, which is classified as a “women-hating” site by the Southern Poverty Law Center, and said in part: “The Honey Badgers are a diverse group of female gender apostates–women who oppose outdated ideas of gender, particularly the association of womanhood with weakness. We offer an alternative to the damaging portrayal of women as victims of geek and gamer culture.”

We’re not done just yet. The group also attended the “Women Into Comics” panel last night. Panelist Brittney Le Blanc gave us this account of the events that transpired:

We were about fifteen minutes into the panel when a woman in the second row stood up and identified herself as a Men’s Rights Activist. She and her male companion both came to raise issues they felt would not be covered by our panel. Raising points about the way men are portrayed in comics struck a note with all the panelists, as we agreed that we want to see a diversity across body types, characters, races, etc in mainstream comics. Not everyone wants to see a hero who looks like he’s built like Gaston from Beauty and the Beast. They also accused us of presenting all women as victims, which was an outright lie and derailing tactic.

Their questions did take up quite a bit of time at the panel and served to derail the topic onto another tangent, which was frustrating for the panel and for those in the audience. It’s what they came to do, and in part, they succeeded. I would say that it brought up some great discussions though, allowing us to talk about the lack of representation for people of colour in comics and to give well deserved props to artists like Sophie Campbell, who has done an amazing job in showcasing a broad range of bodies with her art in Jem and the Holograms.

It’s disappointing that they weren’t there to have a conversation or to listen to what we, and members of the audience, were saying. They wanted to stand up and have their say, but not to listen or try to understand the points of view other people in the room had. This was further proven by the video discussion they posted later last night, in which they mentioned our panel and that we were “donning the ball gowns of our victimhood”, which I’m not even entirely sure how to take. I will admit to not watching the whole video, and I think anyone who attempts to watch it would understand why.

I truly believe in freedom of speech, but coming to a panel with the entire purpose of derailing it and shooting down the voices on the panel isn’t constructive. It appears that was their plan for the expo, to come and to loudly take over the spaces of other people – although it was not violent or threatening, it’s disrespectful, disappointing and offers a prime example of why these panels need to exist in the first place.

Now if you’re wondering if Calgary Expo had any rules against this kind of thing besides their extensive anti-harassment policy, here’s a bit from their Exhibitor Package:

The Exhibitor agrees to protect, keep, and save the CCEE, the promoter of the event, forever harmless from any damage(s) or charge (s) imposed for violations of any ordinance or regulation by the Exhibitor, his/her employees or agents, as well as failure to comply with the terms and agreements of this contract. Further, Exhibitors shall at all times protect, indemnify, save, and keep harmless CCEE against and from any loss, cost, damage, liability, or expense which arises out of or from or by reason of any act or omission of the Exhibitor, his/her employees, or agents.

“The CCEE shall have the full power in the interpretation and enforcement of all contract regulations contained herein, and the power to make such amendments thereto, and such further rules and regulations as shall be considered necessary and proper,” it goes on to say further. And, “The Comic & Entertainment Expo Committee reserves the right to remove any person(s) who does not comply with the rules and regulations outlined in the Exhibitor Agreement, and the policies and procedures outlined on the website. No refund shall be given to exhibitors who are removed from the show.”

Yes, Calgary Expo kicked them out this afternoon.

Day2 Of #CalgaryExpo and our booth is being shutdown because being anti-censorship is bad #GamerGate pic.twitter.com/VwUonvLsxU

It’s very clear from the evidence out there right now “anti-censorhip” was not their agenda. Searching the Gamergate tag on any given day will tell you the same. We’ve reached out to Calgary Expo and will update this post when they give a statement. [Update #1: Calgary has tweeted they “asked” the group to leave.]

@EzraTwitch The events reported are accurate. #CalgaryExpo is a positive and safe event for everyone, and the exhibitor was asked to leave. — Calgary Expo (@Calgaryexpo) April 17, 2015

@ChrisCharabaruk No, we politely asked an exhibitor to leave. The Calgary Expo is a positive and safe event for everyone.

[Update #2: Calgary Expo have let us know, “The booth was shut down before the floor even opened to the public.”] [Update #3: Here’s Calgary’s official statement.]

At the #CalgaryExpo, we are all about #ExpoEquality. Here’s the scoop on what happened today. :) pic.twitter.com/TzwJ4MPPD3 — Calgary Expo (@Calgaryexpo) April 17, 2015

[Update #4: Honey Badger Radio has a full recording of the panel on their YouTube. The audio isn’t fantastic so if anyone else has a better one please let us know. (Edit: Jennifer Medina has provided a rough transcript.) There’s also a link to an hour and a half chat response to the situation from Straughen. In part she says the convention is partially funded by the city, so “[their] treatment is wide open to a human rights violation complaint.” HoneyBadgerBrigade.com has also issued a press release. Edit: The Honey Badger Radio YouTube just uploaded a video from Tieman titled “Banned for not Damselling.”]

[Update #5: Thanks to ComicsAlliance for catching a bit we missed from the Honey Badger’s crowdfunding comment section. Screencapture from that page below.] 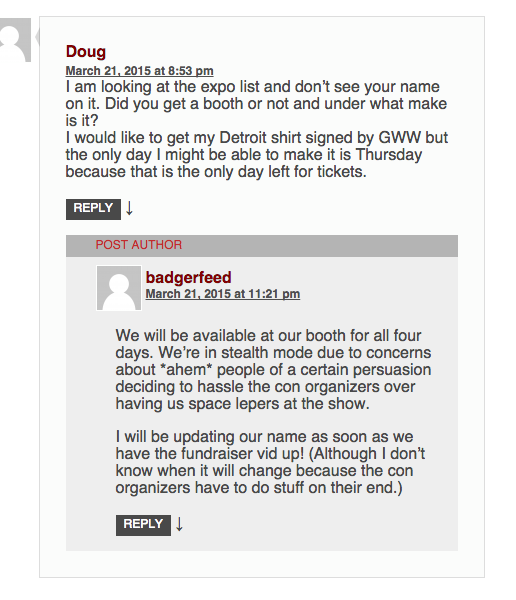