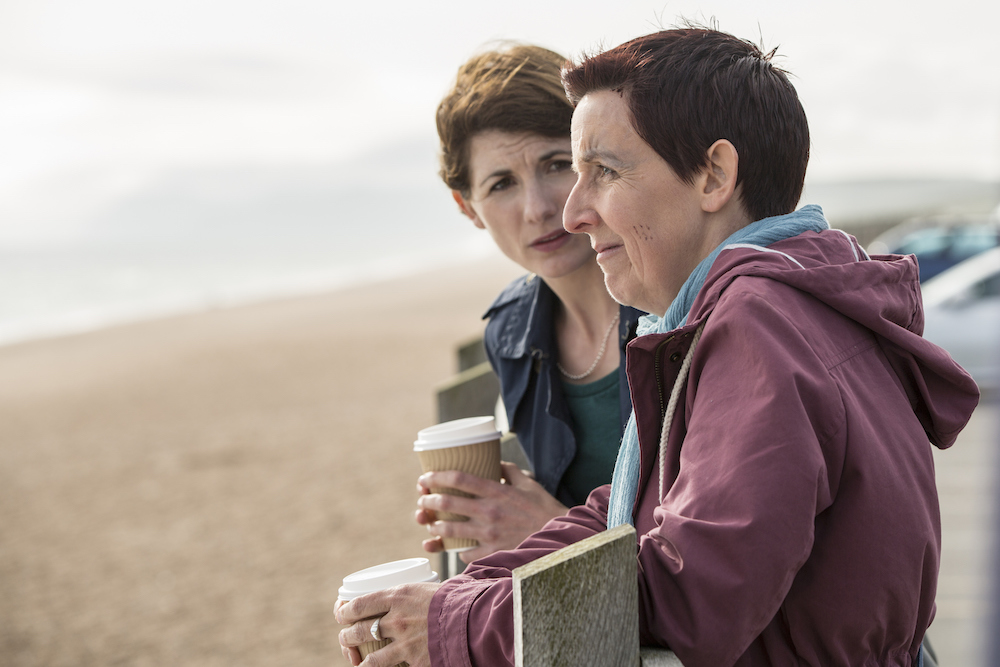 Some spoilers ahead for Broadchurch season 3, but not the big reveal!

The Broadchurch trilogy is one of my favorite watches—this fictional detective show (with an impeccable musical score by Ólafur Arnalds) shows crime bubbling up to the surface of a quaint, coastal town in England. Starring Olivia Colman as Detective Ellie Miller and David Tennant as Detective Alec Hardy, the first two seasons followed investigations of two homicides with child victims. Both seasons are fascinating, being somehow perfectly paced as well as taking the necessary time to show slower, smaller moments for intense character development.

When I began watching the third, final season, recently released on Netflix, I was almost taken aback by writer/creator Chris Chibnall’s choice for the final Broadchurch story: This season was entirely centered around a case of sexual assault. A woman in the surrounding community, Trish Winterman (played by Julie Hesmondhalgh), is assaulted and raped by an anonymous man at her best friend’s birthday party. A few days later, she reports the attack to the police. Her memories are hazy, and our lead detectives set out to solve her case.

I was taken aback because this was a departure from their murder mystery format. I was also wary. Though Broadchurch has always felt grounded and feminist to me, I was worried about how they would handle all of the intricacies of a story about sexual assault.

It turns out that this was one of the most respectful, thorough, thoughtful portrayals of a sexual assault case I have seen on television. This is partly, I think, because Broadchurch used its same strengths from the first two seasons, where there was already a dual focus: the case and the community. Specifically, in this season, we see how the frameworks of sexism and toxic masculinity unchecked in a community can create an environment where sexual assault crimes occur, are not reported, or go unsolved.

Broadchurch shows this in many ways in the minor characters. We start three years into the future from the previous season, and both Miller and Hardy now have teenage children. In the first episode, Detective Miller’s son, Tom (Adam Wilson), is suspended for watching and distributing porn at school—and we see his casual attitude (“everyone watches this stuff”) later affect Hardy’s teenage daughter. Daisy Hardy (Hannah Rae), is new to Broadchurch, new to living with her dad, and new to the school. Daisy has her privacy violated when somebody takes her phone and distributes an intimate picture of her around the school’s population. She feels humiliated wants to leave and go live with her mom again. While this plot addresses bullying and parenting, a part of it ends up being a key to solving the main crime of the season. The show seems to say to us, correctly, that what young people don’t learn about sex and boundaries can be dangerous. Sexual assault doesn’t happen in a vacuum. 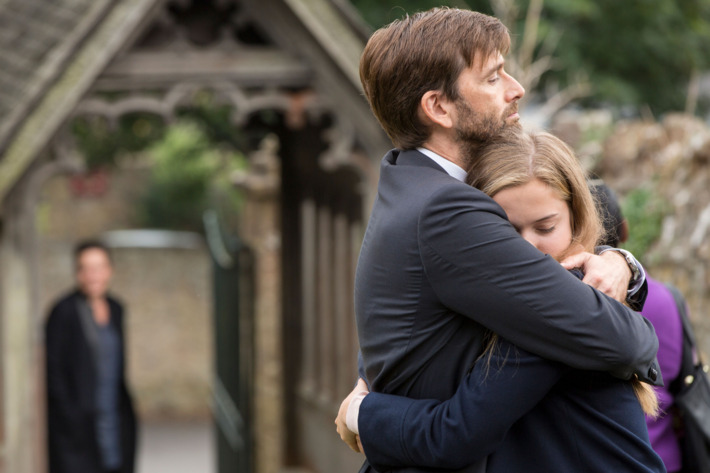 The adult members of Trish’s community reflect this. Trish’s boss, Ed Burnett (Lenny Henry), rationalizes stalking a woman employee by saying he’s in love with her. Examining his overstepping “concern” leads to a discovery that he’s taken many, many pictures of this woman without her consent. This has gone on for months, and the woman has tried to set boundaries, but felt powerless because of the boss/employee power dynamic. Another figure in the investigation, a cab driver without a solid alibi, we learn treats his wife and son terribly. He cheats on her openly and emotionally abuses his son in public. This also ends up directly contributing to the crime committed.

As the case goes on, it’s revealed that there is a pattern of sexual assaults that follow the profile the detectives put together around Trish’s case. After publicly releasing details of the case, the detectives discover that several women in the community have also been assaulted by this man over the last few years, and even there, Broadchurch succeeds in showing that reporting is a layered issue. One woman is eager to help and make a formal statement—another cannot, as she has tried to heal and move on with her life, and she doesn’t want to risk her family finding out she was attacked. Both of these women are written with real perspective and sympathy, and both show the fear behind not reporting a sexual assault.

That reality behind that fear is exemplified in the police system through a younger detective, new this season, DC Katie Harford (Georgina Campbell). In the first episode, she is the only person on the team to suggest that Trish might not be “genuine” in her report of the assault. Detective Miller (Colman) gives her a stern talking to about always beginning by believing the victim. When Harford defensively responds, “just asking the question,” Miller, stone-faced, responds, “All right, you’re new, we forgive you.” I like that Broadchurch took the time to show that women need to believe women too—the patriarchy, unexamined, can brainwash anyone.

Broadchurch’s male detective, DI Hardy (Tennant), does believe Trish, and he never questions her assault as being disingenuous. However, the writers show that even the best-intentioned straight, white, cis men often still cannot fully comprehend the fear and trauma of rape. Hardy and Miller both treat this case seriously and pour themselves into it—we see both of them unable to sleep, unable to engage with their families as they try to solve it, the same as we saw them in the earlier seasons.

Both are frustrated when they have over 50 suspects to interview from the night of the party, and they are only given two extra pairs of hands—“Sexual offenses never get the same resources as murder … Chief Super told me I was lucky to get two”—which puts the pressure on them to come through with a small team. But though both detectives are committed to the case and well-intentioned, Ellie Miller’s compassion and understanding are assets, while Hardy’s ignorance makes him less effective at his job, which feels real and believable to me.

For example, both Hardy and Miller agree that they need a full statement from Trish Winterman as soon as possible. Where they differ is how soon it is possible. Once they’ve established that this was a premeditated attack, Hardy repeats and repeats that this could be a serial rapist, and it is imperative they find him before he assaults another person. Hardy cites this urgency when insisting they need to move forward with getting Trish’s full statement.

Detective Miller, however, cautions him that Trish should not be rushed. Trish needs time to work with her counselor and her adviser. If they push her into a statement too soon, it could be a more traumatic experience for her, which would make it less clear and less helpful for everyone involved. Trish is working with an independent sexual violence adviser, (ISVA) Beth Latimer (Doctor Who’s new star, Jodie Whittaker), who returns from the previous two seasons. Beth has decided on this new career path in order to give back and help people through trauma, and over the season, she’s shown as a powerhouse of understanding and compassion. Beth is assigned to Trish’s case, and she informs Miller that she believes Trish is not ready to give a statement. Miller conveys this to Hardy, but he’s technically a higher rank than Miller and makes the call to move forward and have Trish make her statement.

Hardy quickly realizes he’s made a mistake. Trish is very shaky, and it’s Miller who’s able to ground her and help her to remember useful information. Still, Trish is hazy on the details of her assault and becomes overwhelmed by the questions and cuts the meeting off early. You get the feeling a few days later, after working with Beth some more, this would be a less traumatic experience, and more helpful for everyone involved. Hardy realizes that his insensitivity and misunderstanding, even motivated from a good place, makes him a less effective detective. He admits his mistake to Miller: “Please don’t say I told you so.” Hardy learns a lot this season, and at one point expresses that this case has made him “ashamed to be a man.” 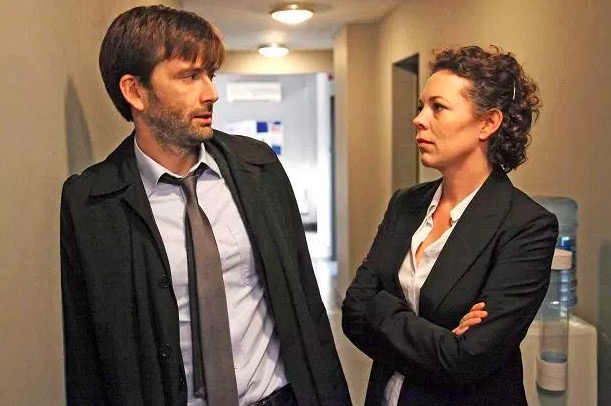 In contrast to Hardy’s larger concerns, Miller takes a more personal approach to this case: right away, she gives Trish her personal cell phone number for emergencies, if she’s scared, if she needs to talk, or if she remembers anything at all about the attack. Though she’s scorned by Hardy for blurring boundaries, Miller’s more human instincts turn out to be far more effective than his departmental procedures. I kept waiting for Miller’s compassion to be somehow played off as a weakness, or to somehow sabotage the case, but instead, it was always shown as a strength. Trish feels comfortable calling Miller out of the blue, whenever she remembers a new detail about the attack. This proves vital to solidifying and then solving the case.

I’m so sad to see Broadchurch finish, but this story left me with nothing but admiration for its team, and the actors’ incredible performances. It’s so rare to find a piece of media invested in showing the causes and ramifications of sexual assault. Thank you, Broadchurch, for putting in the time and the effort into getting this right.

Molly Booth is a freelance writer and YA author of Saving Hamlet, out now, and Nothing Happened, spring 2018, both from Disney Hyperion. She’s also an English MA candidate at University of Massachusetts Boston, where she studies Renaissance Literature and English Pedagogy. She was homeschooled through high school, which means she gained her Geek/Nerd/Dork Certificate at an early age. She lives in Boston with Harriet the queen cat, and her loaf-of-bread shaped dog, Suzie. Visit Molly on twitter, tumblr, instagram, or on her website!