This Is A Cute Bracelet! Oh, And It’s Also A Drone That Will Take Selfies For You In Mid-Air

Does it come in black? 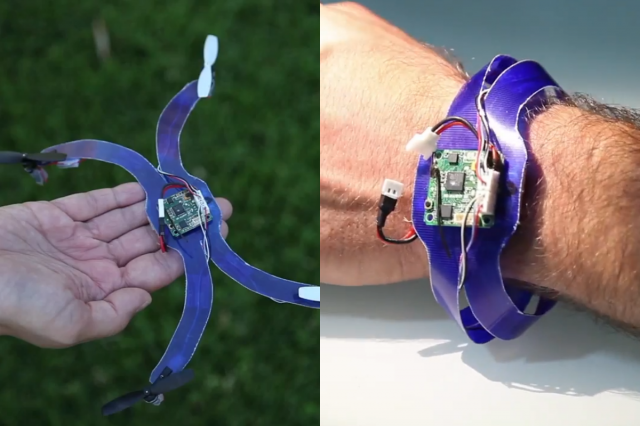 Jewelry makes you feel super-cute, and it doesn’t have to serve any purpose beyond that. But wouldn’t it be better if all your accessories worked double-duty as amazing tech that would also make you feel like a super spy?

That’s the idea behind Intel’s Make It Wearable contest, “a global initiative to inspire ideas and fuel innovation that will evolve personal computing in exciting new ways.” With a $500,000 grand prize, Intel is challenging people to invent and design tech projects so small and functional that you can wear them on your body unobtrusively. It’s the future!

The Make It Wearable contest finalists include emotional prosthetics, a low-cost robotic hand, a sports necklace – and Nixie, the bracelet that is actually a flying drone that will take your selfies and return to your wrist. It’s like a falcon, if the falcon was actually a robot that could take your picture.

Nixie the “flying wristband” was developed by a team led by Christoph Kohstall using Intel’s Edison chip. Project manager Jelena Jovanovic says that the Nixie was designed because “[w]e all have moments we want to remember, we all have moments we want to capture, and maybe even to share them later. Nixie takes the picture that you wish you had always had, but couldn’t, because you didn’t want to stop the action.”

Intel’s Make It Wearable winner will be announced on November 11th. Which project is your favorite?