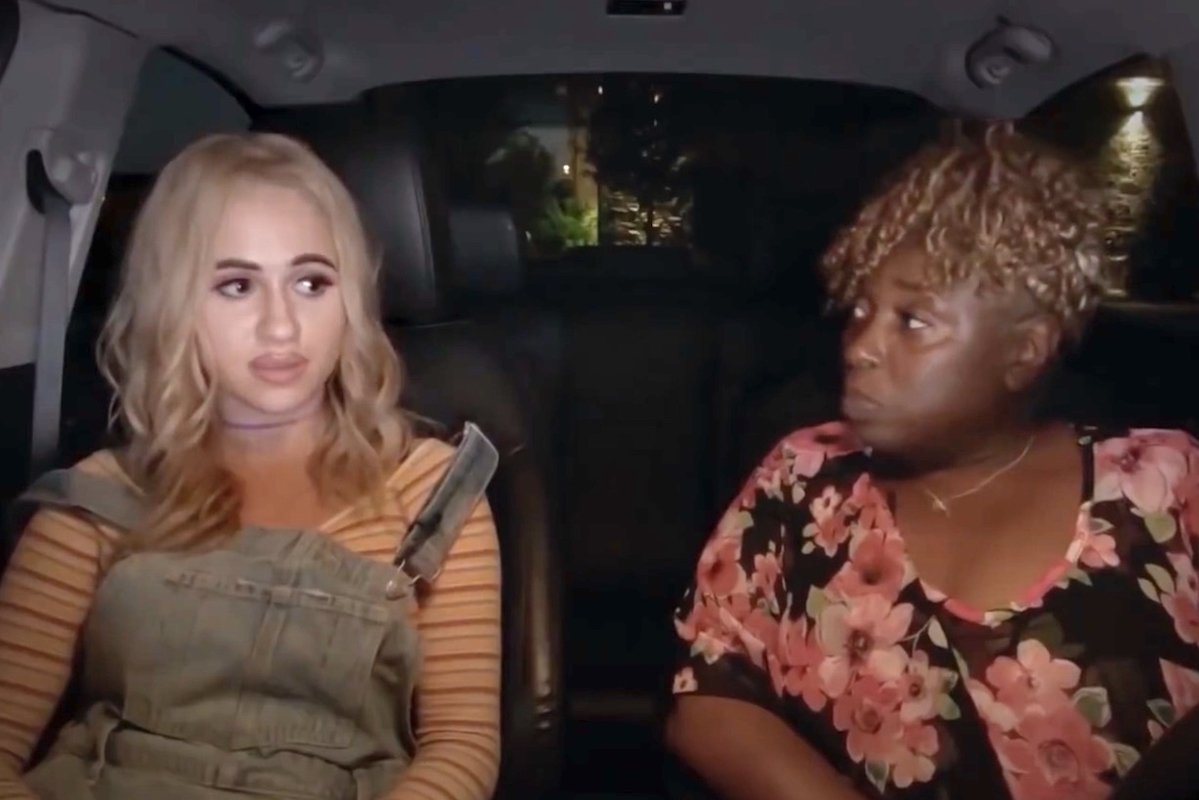 Borat Subsequent Moviefilm was a movie designed to spark outrage. Between Rudy Giuliani’s appearance, the white nationalism on display, the look inside a crisis pregnancy center, and so much more, there was a lot to be angry about. One of the few non-actors featured in the movie who wasn’t a total piece of garbage—who was actually a really beautiful human being—was Jeanise Jones.

Jeanise was hired to be the “babysitter” to Tutar, Borat’s teenage daughter played by 24-year-old Maria Bakalova. Jeanise is told that Tutar is being groomed to become a rich man’s wife or Donald Trump’s mistress. Borat leaves Tutar with a dog bowl for her drink from and a ball and chain to keep her from running away. Tutar tells Jones that she doesn’t believe women can or even should drive cars or go to school or have jobs.

The way Jones approaches Tutar and pleads with her to value herself is one of the major bright spots in the movie. So people were understandably upset when the movie was released last fall and they finally got to hear from Jones herself.

It turns out that Jones was only paid $3,600 for her role in an incredibly popular movie on a platform owned by the richest man in the world. And on top of the insufficient pay was the fact that Jones was left feeling such worry for Tutar, whom she believed was a real person.

Jones was told that the movie being filmed was a documentary and says she didn’t learn the truth until after it had been released and a friend told her about it.

At the time, the New York Post reported that Jones said she felt “betrayed,” although she clarified in another interview with Variety that that wasn’t how she felt. (She did say she wished she was paid more.)

The Post wrote that “after filming wrapped, she worried about the girl and asked other congregants at her church to help pray for her.”

“We were concerned,” Jones told the outlet. “We were up there praying for her and asking God to help her and we were doing what we thought was the Christian thing to do.”

In a new interview with the Los Angeles Times, Bakalova says that she did finally get to talk to Jones out of character, as her real self, which she never got to do while filming. Earlier in November, she told IndieWire that she hadn’t spoken with Jones, so it sounds like this Thanksgiving call was the first time that happened.

“Jeanise is a true angel,” Bakalova says. “I will probably always think of her as my godmother, a real hero and life coach. She just wanted to help this girl become a strong woman. We had a real human connection from the very first day we met. I called her on Thanksgiving: It was my first American Thanksgiving and was also my best. I was so happy to talk to her that I started to cry. When we were shooting, it was very hard for me, because I wanted to tell her not to worry about me. She is a really good example of how important it is to be a good person and care about others.”

After the film was released and it was made known just how little Jones was paid, her pastor set up a Go Fund Me campaign on her behalf.

“We have been praying for the young lady in the movie because we all genuinely thought she was in trouble,” the fundraiser reads. “The joke is on us/Jeanise and that’s no problem. Many of you have reached from around the world to say thank you, so I thought it would be great to give people a vehicle to say thank you in a tangible way, She wasn’t paid much money at all for her role in this movie.”

“This was not scripted for Jeanise. It all came from the heart. She is one of the most authentic people I’ve ever met. One good thing that has come from this is that Jeanise doesn’t have to worry about ‘Tutar’ anymore. She has WORRIED about this young lady for a year.”

The campaign has raised over $184,000 to date. Sacha Baron Cohen reportedly donated an additional $100,000, which Jones has used to help her community recover from the string of natural disasters that hit her state of Oklahoma last year.