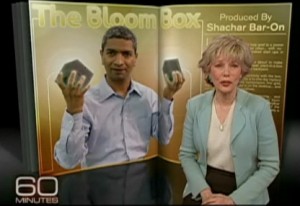 On 60 Minutes tonight a brand new energy company unveiled what was billed as a potentially revolutionary energy technology called Bloom Boxes. Based on fuel-cell technologies, Stahl unveiled the formerly secret company Bloom Energy thusly: “The idea is to one day replace the big power plants and transmission line grid, the way the laptop moved in on the desktop and cell phones supplanted landlines.”

With the clean energy global initiative being one of the most focused on in the world, these boxes are said to be able to run clean and inexpensively. Major companies are said to be involved in the experimental testing including Google and Ebay.

The Bloom Box is said to be a device that can power approximately 100 houses.

According to a press release, the box was developed by NASA scientists and can be used in different ranges of temperatures which makes the way it can be used more expansive.

Several competitors are also trying to develop similar devices in Silicon Valley but Bloom Energy is about to reveal the first in two days.

This is secretive fuel cell company Bloom Energy’s big week. Tonight 60 Minutes aired an exclusive look inside the Bloom Box, and on Wednesday the company is officially launching, after operating for 8 years and having reportedly raised around $400 million from investors like Kleiner Perkins.

Watch the video clips, embedded below, to see what the Bloom Box actually looks like — kind of like an industrial-sized refrigerator, that sucks up oxygen on one side and fuel (natural gas, biomass, etc) on the other. 60 Minute’s reporter Lesley Stahl takes a look at the “secret sauce” behind the Bloom Box, and reports that Bloom bakes sand and cuts it into little squares that are turned into a ceramic, which are then coated with green and black “inks.” Using a special process Bloom creates these ceramic discs and stacks them together interspersed with metal plates of “a cheap metal alloy.” The bigger the stack the more power the Bloom Box will create.

Stahl dug up some interesting tidbits beyond being the first reporter to get a glimpse of the device. Like the fact that Bloom Energy CEO K.R. Sridhar originally came up with the idea for the Bloom Box after developing a device for NASA that would be able to create oxygen on Mars. After NASA ditched their Mars mission, Sridhar had the idea to reverse the oxygen-creating Mars box and use oxygen as the input instead.

Stahl also reports that a Google datacenter has been using 4 Bloom Boxes for the past 18 months. Google was Bloom’s first customer and while Google’s Bloom boxes use natural gas, they use “about half as much as would be required for a traditional power plant,” reports Stahl.

(this story originally appeared on Mediaite)