Black Panther Is Neither Too Black Nor Too Militant 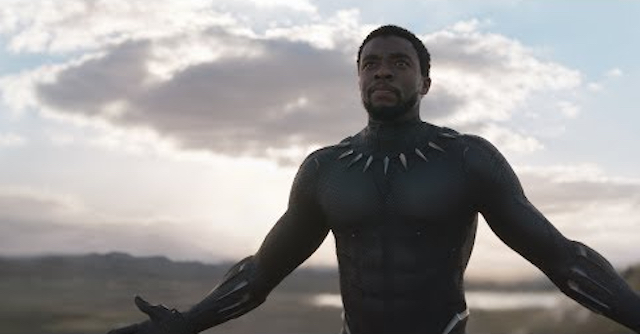 The Black Panther hype was at an all-time high this weekend, after we got a new poster of Chadwick Boseman sitting on his regal throne. Fanning those flames was a teaser trailer that gave us a closer look at Ryan Coogler’s Marvel film and the phenomenal cast that includes Angela Bassett, Lupita Nyong’o, Letitia Wright, and many, many more looking powerful and badass.

However, the inevitable reaction that accompanies anything that celebrates non-white bodies came soon after. Following that was complete ignorance about the history of the civil rights movement stemming from racist attitudes towards black bodies. Hollywood Unlocked wrote about the backlash, where critics claimed that the Black Panther poster is “too black and militant.” They cited many viewers who pointed out that the poster of Boseman may be an allusion to an image of The Panther Party co-founder and revolutionary Huey P. Newton.

Whether this was intentional or not, calling a movie “too black” is a clear symptom of our tendency to see white as default and anything else as pandering or niche. For an industry that’s always trying to emphasize the universality of white stories and how relatable it is for us to see characters as, “just like, human” it’s very telling that they don’t offer the same rhetoric for a film that’s primarily black actors. This is the first MCU movie with a mostly-black cast and also has the most female actors. That’s something to celebrate in a sea of Chrises.

As for the allegations of the film being “too militant,” I wanted to just list the many action and war films that are comfortable with putting hundreds of dead brown bodies in the backdrop for a white character, but my editor pointed out that would probably take about a year to type out. Basically, if you think the superhero movie Black Panther is too militant but didn’t react the same way to say, American Sniper, you’re not concerned about militancy.

To be clear, I’m not saying these two films are equivalent to one another. Rather, I’m suggesting that many white movie viewers seem fully comfortable with violence when it’s on the side they recognize (white, imperialistic), but are suddenly outraged by any hint of strength from the side of the traditionally marginalized, regardless of context. Black people, especially, are expected to take on the pacifist, peace-making and non-violence route to the extent that self-defense becomes radicalized. We see this in the way people talk about police brutality (“Why didn’t they comply?”) to the rhetoric of activism (“MLK wouldn’t want this!”) to the way we write history. It’s the same mindset that paints the Black Lives Matter movement as a terrorist group, instead of a group fighting for their lives.

Also, I’ll be the millionth person to point out that Huey P. Newton and the Black Panther Party carried guns for defense and in full compliance with laws at the time. If the Black Panther cast acts like the Black Panther Party in the film, they’ll be spending a lot of time running free breakfast programs and medical clinics (which, to be clear, I’m not opposed to as watching that sounds lovely). Here especially, this declaration from the Panther Party’s Ten-Point Program rings especially true: “We want education for our people that exposes the true nature of this decadent American society. We want education that teaches us our true history and our role in the present day society.”

As we talk about Black Panther‘s resonance with the current time it should be important to note here that Black Panther is a character from Africa, not the United States. Costume designer Ruth Carter has said she took inspiration from groups like the Masai and Suri and it was important to her that there wasn’t a homogenization of the continent here. As a result, there should be a conscious effort when talking about Black Panther to recognize the international black culture that this film speaks to, along with its significance, production, and resonance with the United States.

Simply put, calling Black Panther too militant isn’t just an opinion on violence. It’s a reflection of how dominant powers maintain structures by insisting the oppressed behave to a certain set of standards under the guise of decorum, making change incredibly difficult or outright impossible. To ignore the loaded nature of this allegation of militancy enforces the racist way that society makes black bodies look inherently more violent, aggressive, or barbaric—a bias that actively puts black lives in danger.