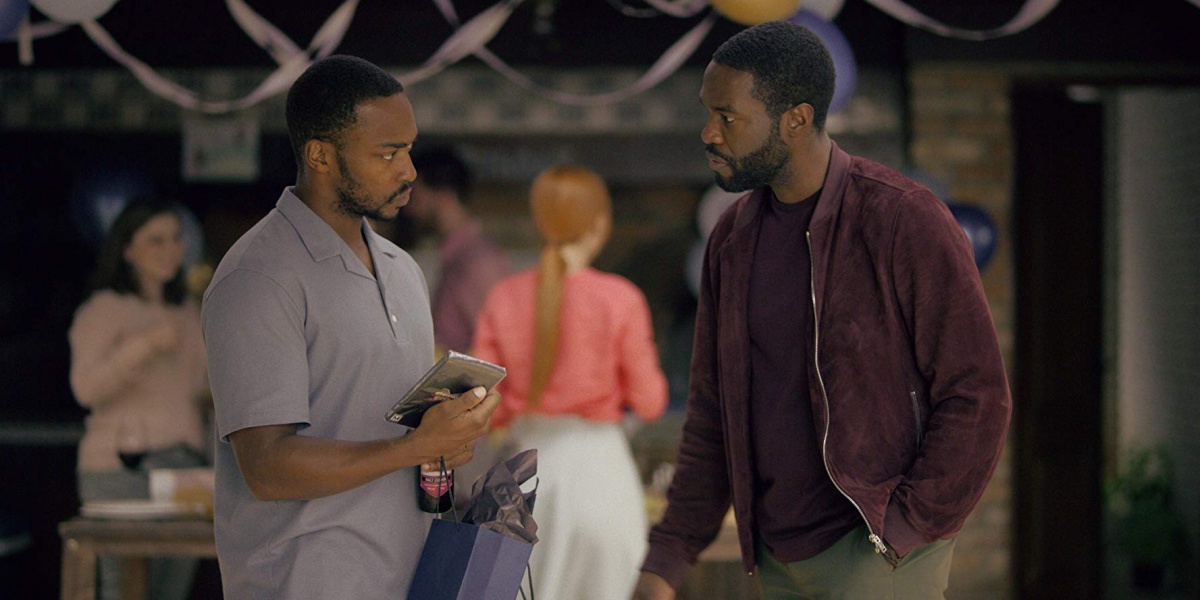 One of the most interesting Marvel and DC crossovers ever happens in “Striking Vipers,” the first episode of Black Mirror‘s fifth season. It stars Anthony Mackie (Falcon/Captain America) as Danny, and Yahya Abdul-Mateen II (Black Manta) as Karl, as two estranged college friends. They reunite during Danny’s birthday party later in life and begin bonding over an updated VR video game they used to play all the time called Striking Vipers. Meanwhile, Danny’s wife Theo (Nicole Beharie), attempts to navigate her marriage’s growing complications.

Danny and Karl start having sex in the game in the bodies of their chosen characters Roxette (Pom Klementieff) and Lance (Ludi Lin)—both Marvel and DC alum (again, crossovers are weird). We don’t really get a great sense of Danny and Karl’s relationship before they start having VR sex as these two characters. We see in the flashback that they used to play the game together and wake up Theo from her beauty sleep, but in “real life,” we only see them have sex with women.

Now sexuality is a spectrum and I’m not saying that these men “need” to be bisexual/pansexual/queer etc., but the narrative sets up this really deep bond between the two men and we don’t get to see it outside of the heteronormative skins they are intimate with. Hell, we don’t even see them talk to each other much, it’s just a lot Lance/Roxette sex, with one scene of Danny/Lance asking Karl/Roxette what it is like having sex in the form of a woman. The biggest sign we get that there are more “feelings” behind these acts is when Danny cancels their plans because of his anniversary dinner, he puts an “x” (kiss) at the end of this text to Karl.

Slowly we get to see the fallout of their growing desire for each other in this environment. Beharie’s Theo is magnificent because as an actress she is able to fully command the screen. Her frustration at Danny’s absence both emotionally and sexually really highlights that Danny’s distance has real emotional consequences for the woman he loves.

Karl also finds himself unable to perform sexually because what he has in real life doesn’t match up to the feelings in the game. Danny decides to break it off and for seven months Karl tries having sex with other players, in all kinds of forms (as the internet has told you, he has sex with the polar bear character)—but the thing that made it special was the relationship between these two people.

Eventually, they meet again in the game and have sex when after Karl tells Danny that he loves him. This causes Danny to lash out and he tells Karl to meet him in an ally in 30 minutes. They kiss in the rain and both respond that they don’t feel anything (methinks the gentlemen protest too much honestly) and they end up getting into a fight. You get the feeling that this fight would have led to sex if the police didn’t show up. Theo picks Danny up from the station (she’s pregnant now) and he ends up telling Theo the truth in a cut to black scene.

We find out that they have all come to an agreement that on Danny’s birthday, Theo can go have sex with whomever she wants, and Karl/Danny can have their VR sexual relationship.

The episode has had a very mixed reaction in the Black discourse, but I think what many of us can agree on is that we rarely have depictions of men, let alone Black men, in their 40s exploring their sexuality in new ways. Sexuality is not one static thing and it can evolve at any time, so seeing Karl and Danny feel safe exploring this part of their sexuality is positive. The downside is the cheating/lying and the lack of character development of Theo.

I appreciate Black Mirror creator and writer Charlie Brooker taking the time to explore this kind of storyline, and I even enjoy the fact that it ends in a way that explores non-monogamous relationships as valid, but I also wish that this story was written by someone who had something more to say about it that the spectrum of sexuality. I feel like I wanted to see more of that. Plus, it’s also just exhausting to see the narrative of potentially Bi/Pan people cheating on their spouses with someone of the same sex. One of the stigmas facing bisexual men is just this, and the ending wraps up complicated things quickly for a happy-ish ending.

I don’t think the episode is bad or intentionally harmful, but I feel like we have so few positive portrayals of Black male queerness that is more a spectrum. This could have been a much more thoughtful exploration if it showed us more about why Karl and Danny are drawn to each other, besides the two actors’ amazing chemistry.

What did y’all think of the episode?