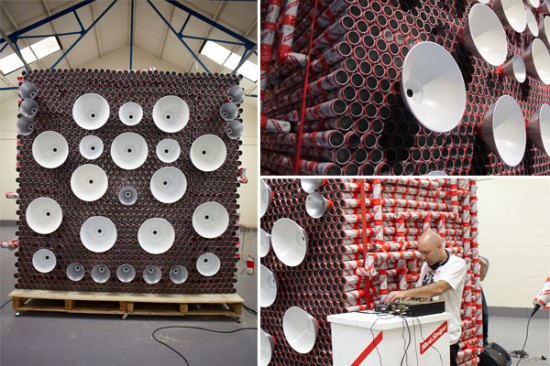 As a part of Red Stripe’s “Make Something Out of Nothing” campaign, Japanese designer Yuri Suzuki and Mathew Kneebone joined forces to make this crazy sound system out of 5,000 actual Red Stripe cans. As you may be aware, Red Stripe is a Jamaican beer and DIY sound systems are actually a fairly relevant part of Jamaican culture. Many reggae bands from the island don’t have the money to get a real sound system and instead cobble together something makeshift. That’s what inspired Red Stripe to commission this very Jamaican sound system made out of very Jamaican beer cans.

The system’s 5000 cans were collected at the Notting Hill Carnival. The cans were cleaned out, and had the top part completely removed. After that, they were meticulously taped together to form the framework of the sound system 2.5 meters high and 2.5 meters across. It has a dirty little secret though: There are totally some speakers hidden in there. Still, the beer cans amplify the sound, so it’s not just a beer can shell for a regular sound system. The can’s are doing something. In any event, it’s pretty neat and I want one. I don’t know where I’d put it or what I’d do with it, but I’m sure I’ll figure it out after the first hundred beers or so.

Relevant to your interest in things made of other things