BlackBerry Messenger Is Available for iOS and Android, but You Have to Wait Your Turn

We thought the point of the Internet was not waiting in lines. 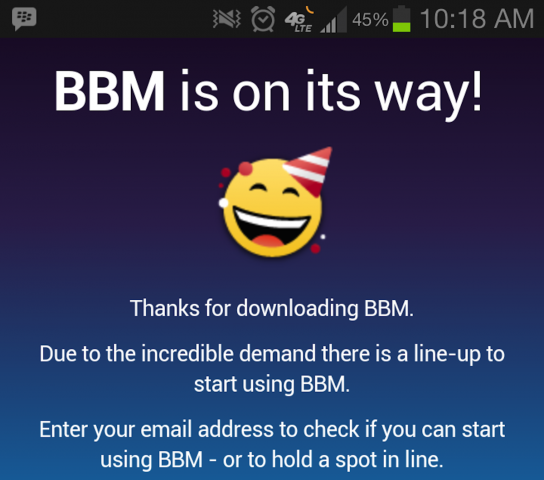 It’s a great day for BlackBerry users, as their beloved BBM proprietary messaging service has finally gone cross-platform. We tried to take the iOS and Android versions for a spin, but demand for accounts on the service is supposedly so high that there’s a virtual line. Yeah, we were surprised, too.

When the BBM app is opened, users eager to talk to their BlackBerry-sporting friends will likely be greeted by a message explaining that they must first wait their turn to set up a BBM account. If that doesn’t immediately cause you to lose all interest, the app asks for your email address and says it will email you when you have reached the front of the line.

If you’re wondering how long that line is, we gave our emails to the service at around 10:30AM EDT, and we have not received a response as of 3:30PM EDT. So, we’re talking crazy, eight hour theme park ride lines here.

We would have saved you a space, but it turns out that virtual lines are inferior to regular lines in that regard. Sorry.

As modern smart phones have pretty much dominated BlackBerry’s stomping ground in recent years, it’s a little tough to imagine that there is such a huge traffic problem for new BBM accounts. Maybe BBM is just playing hard to get?