Twitter Decided Barbie Is Queer and It's Glorious | The Mary Sue 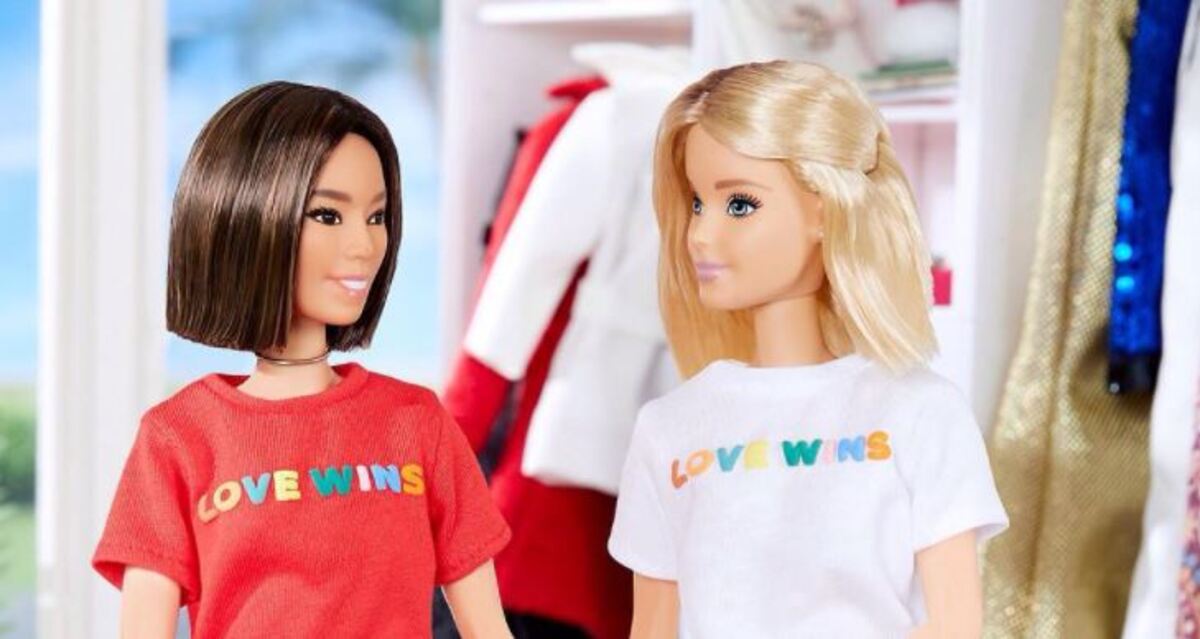 I love logging into Twitter to see something confirmed that I always knew in my heart to be true: Barbie is queer. That’s at least the consensus today as the internet discovered that the iconic doll character may be more into ladies than her traditional image might suggest. Is Barbie a lesbian? Is Barbie bisexual? Did we all know something when we made our dolls get married (usually naked) when we were kids? If a few million memes are to be believed, then yes.

Today’s “Barbie is a lesbian” Twitter storm happened thanks mainly in part to Twitter rediscovering a 2017 photo spread with Barbie and a doll representing fashion blogger Aimee Song in “Love Wins” shirts, looking pretty much like girlfriends. I mean, it looks like they’ve already adopted a pet together which is peak queer woman.

Well, over three years later, the image and others resurfaced and Twitter went into gay overdrive. And it was great.

barbie and her girlfriend pic.twitter.com/QHpEjInIz1

barbie got a gf before me i am not okay pic.twitter.com/8BDupitYMa

“bArbIE iS a lEsBiaN” this is bi erasure😤 don’t forget about ken, and LOOK AT HER HAIRCUT😤😤💗💜💙 pic.twitter.com/6PYXCGYa5s

retweet if u, like barbie, had/have a “fairy secret” pic.twitter.com/sjbbf6m1NA

Song herself got in on the fun.

And it’s not just the Barbie doll whose sapphic tendencies were coming to the general public’s attention. In her various movies, Barbie really seems to have a lot of “gal pals” as they say.

how could you not know barbie is gay pic.twitter.com/PUJJnu9uVS

why are people surprised that barbie is gay as if this scene doesn’t exist pic.twitter.com/t3XqPkXaqJ

The Barbie universe seems pretty chock-full of queerness if we’re to be honest, because we’ve known about Ken for years too.

Now that Barbie came out – can we please free him from the restraints of heterosexuality? #barbz pic.twitter.com/gieM4mzx2q

barbie is a lesbian and Ken was her emotional support himbo. this is not up for debate #barbie pic.twitter.com/7g0EIhhFSe

Y’all gave Barbie her girlfriend now give my homie Ken his boyfriend pic.twitter.com/uRhAEt72Z6

Now, I’m sure there will be some folks getting up in arms about this and I would like to remind them that Barbie … is a doll and a fictional character. She’s whatever we want or need her to be. If you want your doll to be gay, she is. If your Barbie is bisexual or pansexual, that’s her truth. For kids now and in the past, Barbie represents what they can be and can be whatever they want to be.

Barbie is a rocket scientist. Or a ballerina. Or a fairy. Or a lesbian. Barbie is whatever you need her to be, and for a lot of us and our kids … that’s a queer hero we all can love. And as her shirt says: love wins!