Grogu Is Getting His Macy’s Thanksgiving Day Parade Debut 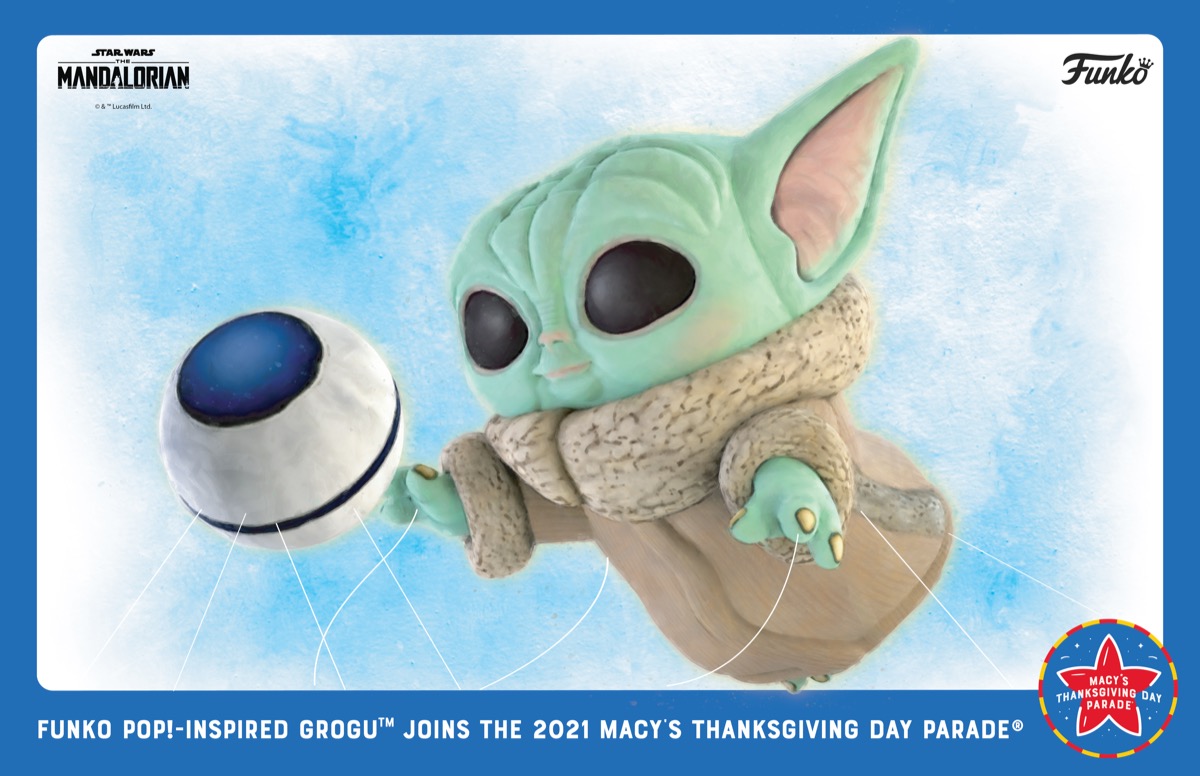 After all this time, we’re finally going to see Grogu get to fly! Literally. At this year’s Macy’s Thanksgiving Day Parade, the famed little green fifty-year-old is getting his very own balloon in the parade! With a fun twist: He’s going to be his Funko self! The star of The Mandalorian has become a household name; even those who don’t watch the show know who Baby Yoda is, so getting to see at the Macy’s Thanksgiving Day Parade? It’ll be a great time!

In the press release for the announcement, it’s clear that those involved are excited to have Grogu take to the sky! Including him reaching for his little metal ball that he steals all the time from Din Djarin’s Razor Crest.

“The giant balloons in the Macy’s Thanksgiving Day Parade have always reflected the very best of pop culture and there is no better example of that than Grogu who has become an instant global sensation,” said Will Coss, Executive Producer for the Macy’s Thanksgiving Day Parade, in the press release. “We are thrilled to collaborate with Funko and Lucasfilm on this Funko Pop! version of the beloved character that is sure to delight legions of Star Wars galaxy fans.”

So what can we expect from the Grogu balloon? Well, you can find out more about the balloon below:

Taking shape in larger-than-life form, the Grogu-inspired balloon will measure 41-feet high, 29-feet long and 37-feet wide, as it flies down the streets of Manhattan in the Macy’s Thanksgiving Day Parade, adding pop culture magic for Funko and Star Wars fans and delighting millions of spectators in person and on television. On Thanksgiving Day, the newest addition will join a line-up filled with Macy’s signature mix of giant character helium balloons, fantastic floats, marching bands, performance groups, celebrities, clowns and the one-and-only Santa Claus.

And yes, it’s Funko making this bit of holiday magic happen for all of us “Funko is ecstatic to bring the Funko Pop! version of the character as a Grogu-themed balloon to the Macy’s Thanksgiving Day Parade,” said Brian Mariotti, Chief Executive Officer at Funko. “Connecting one of pop culture’s most recognizable characters from one of the biggest entertainment brands in the world with one of our nation’s most beloved holiday traditions is truly a moment in pop culture history that will be remembered by Funko fans and millions of other viewers.”

The only way to make this better would be if a version of Grogu drinking his tea took to the Macy’s Thanksgiving Day Parade because who wouldn’t love seeing his judging little face up in the sky next to Spider-Man and Mr. Peanut?

I’m so hppy for my son to make his Thanksgiving Day Parade debut! It’s about time that Grogu got his time to shine, and having him as his Funko self is just that much better! You can catch him and the rest of the parade on NBC from 9AM to noon on Thanksgiving, no matter your time zone.