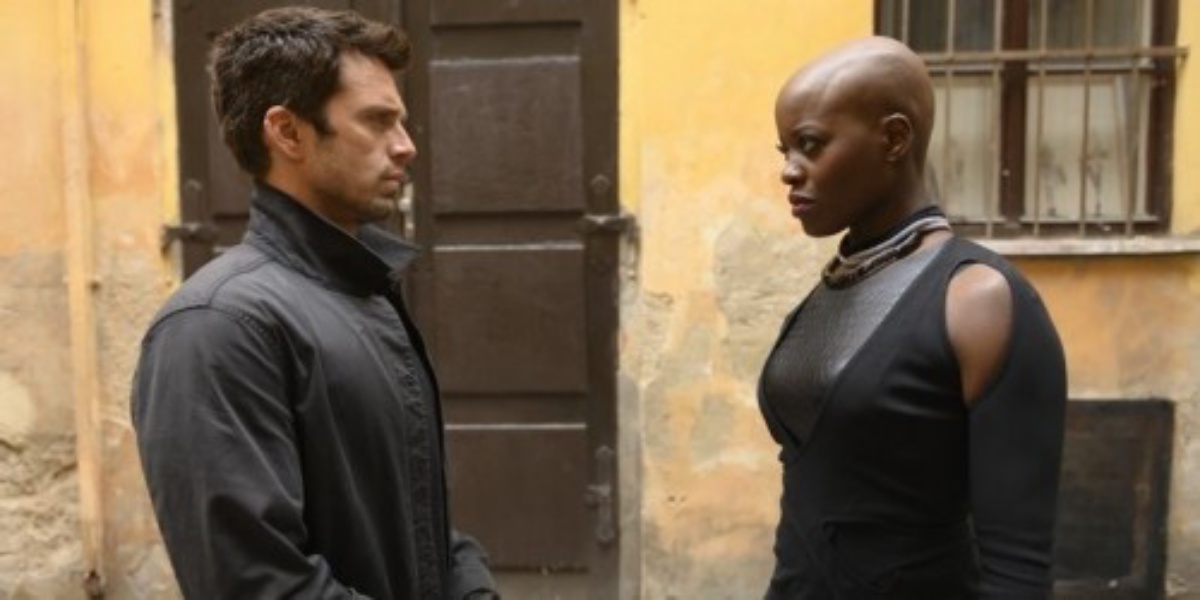 You ever see two people interact and realize that you want more of it? Well, that’s how I felt when I first saw Ayo and Bucky interact at the end of last week’s The Falcon and the Winter Solider, and it has gotten even stronger since.

**The Falcon and the Winter Soldier spoilers!**

Actress Florence Kasumba has already been a legend since she told Natasha Romanov, a.k.a. Black Widow, to move or she would be moved. After a hiatus, her character, Ayo of the Dora Milaje, returned to both capture Baron Zemo and … have brimming sexual tension with Bucky Barnes, who she calls by his Christian name, James.

We get a flashback to six months prior with Ayo and Bucky in Wandanda. Bucky was still going through the deprogramming, and we see the moment where he is emancipated from his Winter Soldier programming with Ayo beside him saying he is free. It is a truly powerful moment, and Sebastian Stan finally gets to play another mode to Bucky besides stoic.

Ayo has come for Baron Zemo for killing their former king and has given Bucky the courtesy of 8 hours before they come for him. It is a tense moment because, while we don’t get a lot of time in this scene between the characters, the intimate flashback alone signifies that these two have shared some level of emotional intimacy.

Bucky has only ever shown even the slightest whiff of chemistry with Sam and Steve, but with Ayo we finally see him click with someone, and mostly it is because Bucky clearly respects Ayo. When pushed into fighting because of the cringe white boy fragility of John Walker, you can tell Bucky is reluctant to scrap with the Wakandans.

The real kicker came when Ayo literally disarmed Bucky and left him standing there like the gasping-Pikachu meme. It was a cool moment and a reminder that the Dora Milaje aren’t anything to mess with.

It made me really want to see more of Bucky’s experience in Wakanda, because it really became a shorthand for a whole chunk of his character journey that we never got on camera. He went through so much trauma and healing, but it was mostly offscreen.

Just like WandaVision, this MCU miniseries has truly highlighted why these smaller shows are necessary. There is so much to unpack about this world that has been created, and I am hungry for this journey. The writing may not be as tight as WandaVision, but FatWS is definitely trying to make its audience ask big questions about this new world and the characters who have been existing in it.

But yeah, this is an Ayo/Bucky fanpost.