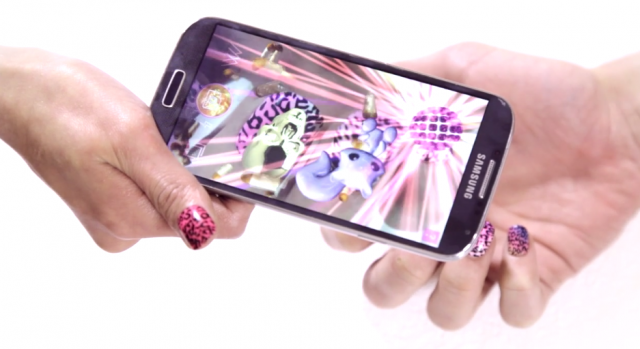 Augmented reality is fun, albeit usually a bit contrived in execution at times. Like, okay, you have this design on a piece of paper that turns into a kitty when you look at it with your iPhone camera, but what are you supposed to do, carry the paper around with your everywhere? Of course, if you had the design on your fingernails, you could show off adorable 3D kitties every time you took a picture of yourself—and soon, you’ll be able to do just that.

Metaverse Makeovers, a company based in Shanghai, Melbourne, Hong Kong, and online, offers their customers stick-on nail decals with embedded holograms in them. Not only do they translate to cool 3D designs when you view the nails through their custom app, but you can also collect and customize different augmented designs to affix to your nails in real time. Also, their Chinese trailer is definitely Sailor Moon-inspired, so they definitely know their target audience well:

A of now it appears that the nails are not available for purchase unless you can find them in person through one of the company’s Shanghai affiliates, but they recently received a $750,000 investment from angel donors in Melbourne for their “appcessories,” and will be showcasing the product at the Australian Center for Moving Image on February 15th.

There’ll also be a a livestream demonstration that same day at noon in Australian Eastern Daylight Time, which will feature “performance installations” from nail bars in Shanghai, Melbourne, and Hong Kong. Eventually you’ll be able to buy the decals on Taobao, a Chinese retailer similar to eBay or Amazon. Until then, guess your nails will be stuck in two dimensions.