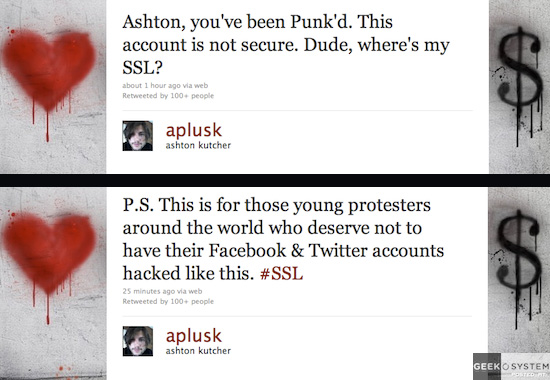 Celebrity and Twitter demigod Ashton Kutcher appears to have had his Twitter account hacked this evening. As of 8:30pm EST, two Tweets were sent from his account, neither of which has been deleted yet: The first asked “Dude, where’s my SSL?” and the second claimed that the stunt was in honor of young protesters around the world whose social media profiles were hacked by their governments.

The “SSL” mentioned in the first Tweet refers to the Secure Sockets Layer protocol: Based on the reference, Gizmodo’s Rosa Golijan speculates that Kutcher was hit with something like the Firesheep browser-hijacking extension.

Earlier Tweets of his today and yesterday reference the TED 2011 conference, so Kutcher certainly would have been in proximity with tech-savvy people capable of deploying such a trick; it’s lucky no one did anything more malicious.