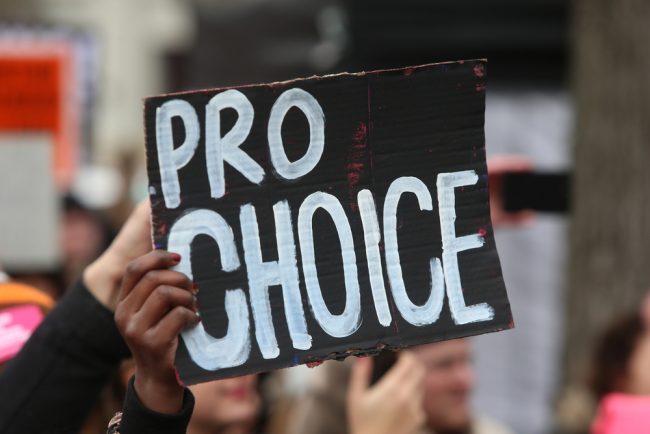 In case the arson, vandalism, assault, and occasional assassination of abortion providers haven’t made it clear, anti-abortion protesters are dangerous; they’re extremists whose inherently violent ideology of forced birth and denying women meaningful bodily autonomy often translates into direct violence and intimidation, and this week, their tactics have pushed one abortion clinic in Arkansas to temporarily shut down as they search for a safe place to relocate.

“We are no strangers to pressure from politicians and individuals who want to stand in the way of our ability to provide comprehensive sexual and reproductive healthcare,” Planned Parenthood Great Plains CEO Brandon Hill said in a statement. “Ultimately, in this instance, we had reached an impasse. We chose to seek an alternative location that would meet our high standards for safety and ensure we can continue to provide the comprehensive care our patients need and deserve.”

Planned Parenthood will see its last patients at the current Fayetteville location on July 25.

Now more than ever, it seems we need to have a meaningful conversation about the horrific nature of anti-abortion protests outside clinics. Under the guise of “counseling” and “praying for” women and patients trying to enter clinics to seek care, anti-abortion protesters harass, threaten, intimidate, and in plenty of documented cases, assault patients and staff. In other cases, anti-abortion protesters have been known to expose patients, volunteers, and staff by sharing their names, addresses, and license plate numbers on the internet. Contrary to several court decisions that have defended protesters’ right to engage in this behavior, this has nothing to do with “free speech”; it’s a fundamental invasion of privacy and a determined effort to stop people from accessing healthcare.

Anti-abortion protesters’ tactics have created a culture of danger and stigma around reproductive health clinics that is so pervasive that specialized clinic volunteers, whose role is to help patients safely enter the clinic, have become commonplace nationwide. Clinic staff and volunteers have risen above the threat of anti-abortion harassers and vandals for years, and they’ll continue to—after all, the clinic in Arkansas isn’t closing, but simply relocating.

Yet, the burden shouldn’t be on clinics and staff to work and exist in a culture this toxic and dangerous. Increasingly militant anti-abortion protests demand real reform and accountability, and it’s critical that states pass bold legislation to protect clinics through buffer zones and accountability for those who threaten the safety of clinics.

On Thursday, the U.S. Ninth Circuit Court of Appeals ruled that Trump’s domestic “gag rule,” which would prohibit Title X funding from being allocated to organizations that offer abortion services of referrals, could be allowed to take effect. It’s called a gag rule as it effectively silences healthcare providers from talking about abortion—which, FYI, is healthcare. This ruling comes after several states, including California, Washington, and Oregon, won injunctions on the gag rule, and could leave family planning organizations like Planned Parenthood in a state of limbo if they lose funding.

Despite how organizations like Planned Parenthood, which offers abortion services, receive Title X funding, the Hyde amendment and other state policies prohibit public funding for paying for abortion care itself. This, in itself, is a problem—abortion care should be a right, not a privilege, and shouldn’t just be accessible to those in a position of socioeconomic privilege. But the elimination of Title X funding for any organization that offers abortion on top of family planning care could be devastating for the many Medicaid patients who rely on Title X funding: 40 percent of Title X patients rely on Planned Parenthood for care.

As of this week, Ohio’s state House is considering a bill that would require public schools to develop and implement curriculum to teach about “the humanity of the unborn child,” which would closely follow the development and gestation of embryos and fetuses. The curriculum’s writers would be banned from consulting with organizations that offer abortion care, and banned from referring students to abortion services, as well. Instead, the bill would require curriculum to include information about organizations and agencies that provide support for pregnancy and childbirth that are “willing and able to help you carry your child to term.”

The “Humanity of the Unborn Child” bill may sound especially dystopian in light of a recent wave of abortion bans in the last few months, but it’s unfortunately quite run-of-the-mill for Ohio state politics. This is, after all, the state that introduced a “fetal heartbeat” abortion ban all the way back in 2016, and shortly after, enacted a 20-week abortion ban.

That said, we can’t ignore the hideous implications and potential long-term consequences of a bill like this, if it is enacted. In many ways, misleading, stigmatizing and dangerously inaccurate sexual health education lies at the heart of the fight for reproductive rights and justice, as young people in the majority of states that fail to offer accurate and comprehensive sex ed are exposed to higher rates of unwanted pregnancy and STDs, and are misled to reject the organizations and resources that offer care.

The “Humanity of the Unborn Child” bill poses a threat to the health and safety of young people, who deserve to understand that abortion is healthcare, and it highlights a key component in the fight for reproductive justice: This fight isn’t just about the technical, theoretical right to an abortion or birth control or any other healthcare. It’s about access, education, and the removal of all systemic barriers—certainly including deceptive, propaganda-like public school curriculum—to promote meaningful access to healthcare.

American support for abortion rights is at an all-time high

A new survey by the Washington Post and ABC News found support for the right to an abortion in all or most cases is at an all-time high for the last two decades, at 60 percent, up 55 percent in 2013. The greatest increase in support came from independent women voters (rising 16 points to reach 71 percent) and Democratic voters (up 12 points, reaching 77 percent), while opposition dropped to a record-low 36 percent.

Public opinion has always had a complicated relationship with social justice movements, because, simply put, a lot of people are often behind the times, whether it’s civil rights or reproductive rights, but in this case, the survey offers cause for optimism at a time when anti-abortion politicians have come to rely heavily on misleading or all-out false messaging about so-called “late-term” abortion to rally their base. If recent polling is any indicator, most Americans have come to see through this messaging and understand later abortion as a nuanced issue that shouldn’t be criminalized.

Ultimately, considering how salient the topic of total abortion bans and criminalization of women’s bodies has been since bans swept through Georgia, Alabama, Louisiana and Missouri, this polling shouldn’t come as a surprise. Voters are starting to understand—albeit, frustratingly late—what’s at stake, and with an upcoming election in 2020 that could render anti-abortion lawmakers across the country vulnerable, strong public support for abortion rights could make all the difference.