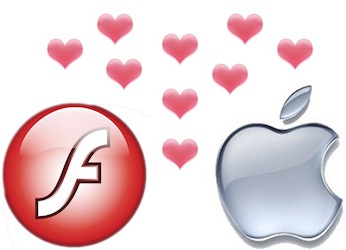 A statement released on Apple’s website today explains that they’ll be easing up on all iOS developmental tool restrictions.

Though Steve Jobs personally bemoaned Flash, stating its inadequacies as reasons why the universally-used development tool would not be supported in iOS, Apple’s new policy seems to dispense with all that, citing developer input as the reason:

We have listened to our developers and taken much of their feedback to heart. Based on their input, today we are making some important changes to our iOS Developer Program license in sections 3.3.1, 3.3.2 and 3.3.9 to relax some restrictions we put in place earlier this year.

In particular, we are relaxing all restrictions on the development tools used to create iOS apps, as long as the resulting apps do not download any code. This should give developers the flexibility they want, while preserving the security we need.

The statement does not specifically mention Flash, but one would tend to think that Flash falls under the category of “all restrictions.” Lifting the ban on Flash means two things: More developers can now create things for iOS, bringing iOS users a wider variety of app options, and even humongous corporate juggernauts can admit when they’re wrong, or at the very least, cater to their user base.