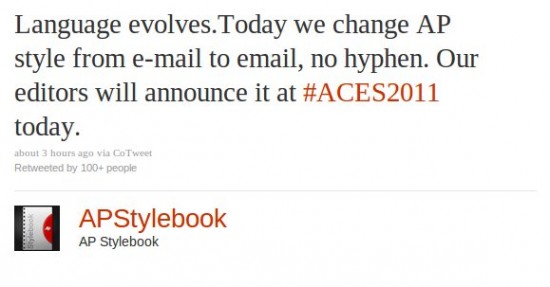 The Associated Press announced today that they have finally caught up with 2001 and are accepting “email” as the correct term over “e-mail.” As of 3am tonight, the common spelling that millions have used for years will become as close to correct as anything can be in English.

Of course, the AP has no formal powers over determining correctness in the language. Some dictionaries, such as the 2006 edition of the Official Scrabble Players Dictionary, list “email” as an acceptable term. But the AP’s stylebook has the historical reputation for being the “Bible of newspapers” and is still looked to as a general language guide in media.

Really, this decision doesn’t mean much for everyday folks since common usage generally trumps prescriptive ones — even Google’s Gmail proclaims “Email from Google.” As the AP admits, “Language evolves.”