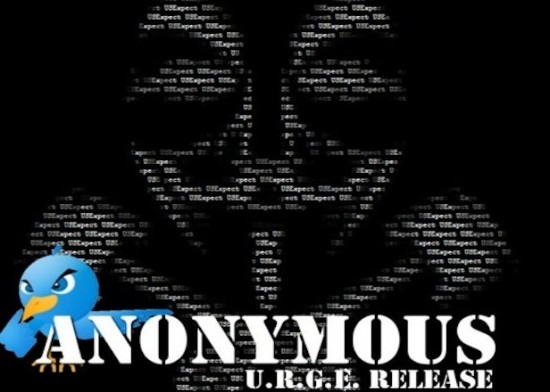 The prolific hacker group Anonymous is taking a brief breather from DDoS attacks to bring you something a little different, a Twitter app. The app, called URGE for Universal Rapid Gamma Emitter, is designed to help users “hijack” trending topics on Twitter for the purpose of helping other, Anonymous-related hashtags reach higher levels of popularity and start trending on their own.

According to Anonymous, the app was developed in order to combat the increasing inanity of trending Twitter topics and help bring more attention to the kind of things Anonymous tends to be interested in, like politics, revolutions and human rights violations. All that being said, the app is fairly simple. Like other Twitter platforms, it allows vanilla tweeting with a few added options that basically amount to automatic hashtagging. 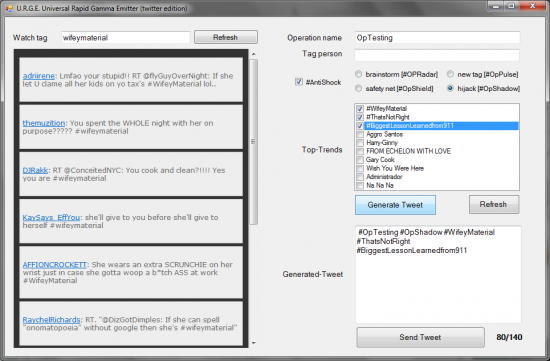 The interface is simple and allows users to automatically hashtag their tweets with a standard Anonymous #OpOperation tag as well as one or several currently trending topics. The app doesn’t really enable anything that wouldn’t be possible otherwise, but it certainly does make it easier and seems to be begging users to spam Twitter for the express purpose of getting something to trend. That aside, this app did give me a reason to take a look at the currently trending Twitter topics and I must admit, they are pretty inconsequential.

Still, it’s fairly questionable as to whether or not spamming hashtags is a good way to do anything other than make Twitter a spamier place to be. Either way, it seems that this is a practice many Anonymous affiliates already engage in, URGE is just there to make it easier. Whether or not that increased ease will change anything remains to be seen.

Anonymous’ statement on the release of URGE:

To the people of the interwebz,

We recently have become tired of seeing trending topics on twitter that were redundant and “pop culture” like. We have also grown tired of Twitter not trending hash tags that actually serve a cause and mean something to free thinkers of the world. We have taken note of why Twitter would not do so, they only trend topics which would “appeal” to people and can get people to tweet more. This was pathetic in our eyes, and we could not stand by and take it anymore. We have developed a program called “U.R.G.E. Universal Rapid Gamma Emitter (twitter edition)” which hijacks trending topics of our choice and and lets us tweet messages within them. This will help raise awareness of problems going on in this world and show people that real problems exist outside of “Jersey Shore” and “Sex”. We will distribute this program amongst Anonymous and anyone else who cares to use this for awareness and bashing corrupt politicians. This is not a hacking tool nor is it an exploit tool, it was created to make it easier for us to tweet faster without copying and pasting constantly.

The original release statement is here, and a user manual, describing how URGE works can be found here.