After watching this clip, I wasn’t convinced They Came Together is an actual movie and not just an elaborate prank. But no: It has an IMDB page. It’s premiering at Sundance this month. It’s real. Says David Wain in a statement: “After having already made world-changing cinematic statements on adolescence (Wet Hot American Summer), religion (The Ten), service (Role Models), and community (Wanderlust), I teamed up with Michael Showalter to take on a topic that (to our knowledge) has yet been seen in the movies: ROMANCE — particularly heterosexual romance between two white people. Our next idea was to mix this romance story with humor – so you could almost call this a Romantic-Comedy, so to speak.” It could either be brilliant or the worst thing ever. If the latter, just treat this clip as a particularly funny short film. An equally amusing poster is behind the cut. 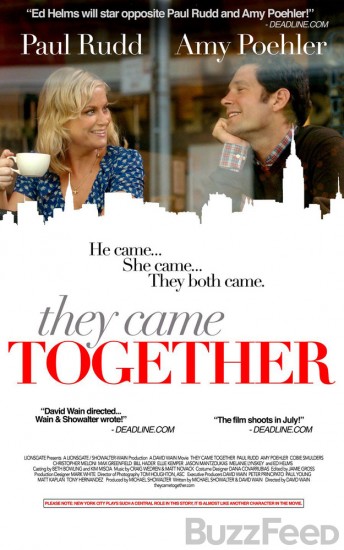 “Please note: New York City plays such a central role in this story, it is almost like another character in the movie.” Oh, you. But the scene wasn’t actually filmed in New York’s famous Strand bookstore. The aisles are far too spacious. Fellow New Yorkers, you know.