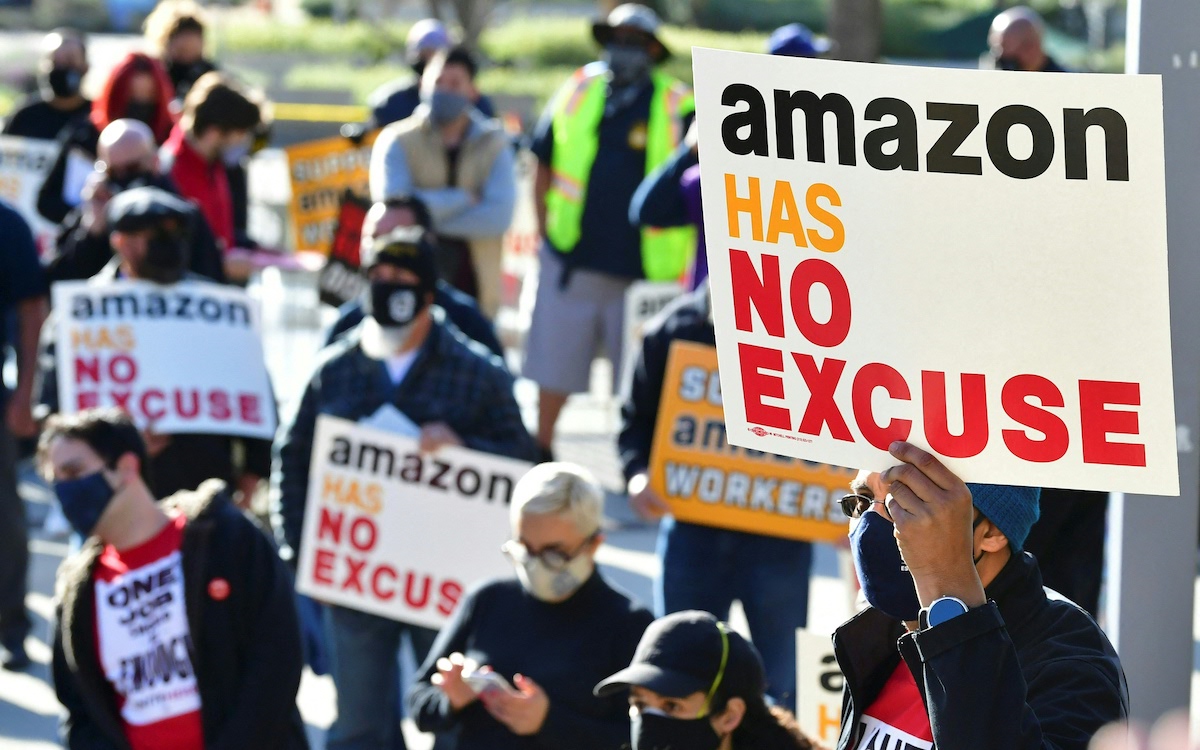 The “Amazon News” Twitter account has long been used to tell the world about all the great things Amazon wants us to know they’re doing. They tweet about the company’s charitable efforts, their work to reduce carbon emissions, and any other nice image-boosting stories. It is a consistently upbeat source for pro-Amazon news, for anyone who might be looking for that for whatever reason.

Then about a week ago, the account took a weird turn. In between its smiley self-promotion posts, it began attacking progressive politicians and media outlets.

As far as I can tell, the shift to antagonistic tweets first came in response to an article in The Guardian about how the film Nomadland glossed over the well-documented and widely-reported horrible working conditions inside Amazon’s fulfillment centers.

“Unlike the production team from Nomadland, it doesn’t appear that the author of this piece has ever been into an Amazon building, and she decided to write a fiction piece based on opinion instead of facts,” the account wrote with maximum pettiness.

Never mind, I guess, that Jessa Crispin’s article cites numerous first-hand accounts from workers and undercover reporters who spent quite a deal of time inside those buildings as well as the company’s delivery vans. Amazon continues to insist that the best way to see what it’s really like inside those warehouses is through a pre-scheduled virtual tour led by them. Sure.

1/3 Unlike the production team from Nomadland, it doesn’t appear that the author of this piece has ever been into an Amazon building, and she decided to write a fiction piece based on opinion instead of facts. https://t.co/bPnzLKEDS5

Next up, when Senator Bernie Sanders announced that he would travel to Alabama to talk with Amazon workers who are attempting to unionize, Amazon’s CEO Worldwide Consumer Dave Clark tweeted that his company is “the Bernie Sanders of employers,” adding that that statement is “not quite right because we actually deliver a progressive workplace.”

Wisconsin congress member Mark Pocan responded to that tweet, saying “Paying workers $15/hr doesn’t make you a ‘progressive workplace’ when you union-bust & make workers urinate in water bottles,” referencing a report that warehouse workers are not able to take necessary bathroom breaks during their high-demand shifts and have to resort to using bottles instead.

The Amazon News account jumped into the conversation to ask Pocan, “You don’t really believe the peeing in bottles thing, do you? If that were true, nobody would work for us.” We do, actually, since it’s been well documented by numerous reporters talking to loads of employees.

1/2 You don’t really believe the peeing in bottles thing, do you? If that were true, nobody would work for us. The truth is that we have over a million incredible employees around the world who are proud of what they do, and have great wages and health care from day one.

Then on Friday, the account lashed out at both Bernie Sanders again and Elizabeth Warren.

First, they displayed a fundamental misunderstanding of how the U.S. Senate works by implying Sanders is responsible for setting Vermont’s minimum wage.

There’s a big difference between talk and action. @SenSanders has been a powerful politician in Vermont for 30 years and their min wage is still $11.75. Amazon’s is $15, plus great health care from day one. Sanders would rather talk in Alabama than act in Vermont.

Then they got into a back-and-forth with Senator Warren about corporate loopholes, telling her, “If you don’t like the laws you’ve created, by all means, change them.” Which is … exactly what she’s trying to do.

1/3 You make the tax laws @SenWarren; we just follow them. If you don’t like the laws you’ve created, by all means, change them. Here are the facts: Amazon has paid billions of dollars in corporate taxes over the past few years alone.

Warren responded: “I didn’t write the loopholes you exploit, @amazon – your armies of lawyers and lobbyists did.”

“But you bet I’ll fight to make you pay your fair share,” she added. “And fight your union-busting. And fight to break up Big Tech so you’re not powerful enough to heckle senators with snotty tweets.”

Amazon’s incredibly petty response was once again to ignore everything having to do with unions and claim they were now the victim of a personal attack from a U.S. senator.

This is extraordinary and revealing. One of the most powerful politicians in the United States just said she’s going to break up an American company so that they can’t criticize her anymore. https://t.co/Nt0wcZo17g

If you’re wondering why the official Amazon News account suddenly decided to write every tweet like they were Fox News cue cards, the answer appears to be: Jeff Bezos.

According to Vox’s Recode, the order to “fight back” came from the very top.

“Recode has learned that Amazon CEO Jeff Bezos expressed dissatisfaction in recent weeks that company officials weren’t more aggressive in how they pushed back against criticisms of the company that he and other leaders deem inaccurate or misleading,” the outlet writes. “What followed was a series of snarky and aggressive tweets that ended up fueling their own media cycles.”

That massive union vote that brought Bernie Sanders to Alabama ends Tuesday, making the timing of this new line of attack awfully suspicious. “Election results will be tallied early this week, and Amazon officials understand that if a majority of the employees vote to unionize, it could set off a chain reaction at other facilities — potentially forcing the e-commerce giant to overhaul how it manages its hundreds of thousands of front-line US workers,” Recode writes.

So yes, it makes sense that Amazon would be scared. What doesn’t make sense how they think peddling snark is helping them in any way.