What Alien: Covenant Has in Common With Anti-Abortion Legislation 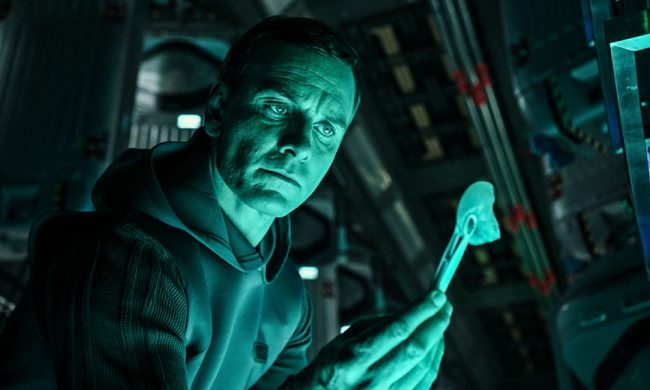 Towards the end of Alien: Covenant the protagonist, Daniels (Katherine Waterson), has figured out that the android David (Michael Fassbender) killed Dr. Elizabeth Shaw (Noomi Rapace) after the end of Prometheus. She’s seen his Frankenstein-esque vivisections and experiments, which we recognize as the beginning of Giger’s iconic xenomorph. Elizabeth Shaw herself is preserved there too, clearly having been studied and experimented on as well. “What did you do to her?” she asks him, her voice shaking with fear. David smiles. “Exactly what I’m going to do to you.”

Yes, it seems that a decade of isolation hasn’t helped David avoid the way of the Hal: 9000. He’s gone full mad scientist, literally: he even mixed up Byron and Shelley, an indication that his wires are getting faulty, which would help explain his dastardly plan. David explains to his doppelganger Walter (a less egocentric version of David, also Michael Fassbender) that his creation by humans was more or less the equivalent of Leonardo Da Vinci creating the Mona Lisa by accidentally spilling some paint. David is a God, capital “G,” and in His mind the only fit purpose for humans is to give birth (literally) to his “perfect organism,” the xenomorph.

The conflict between David and Walter over what it means to be a human, android, and god calls Blade Runner to mind, as well as every other science fiction story involving robots. But it’s something different entirely within the wider context of Covenant and the Alien franchise as a whole. The explicitly feminist themes of the Alien films, namely their commentary on sexualized violence against women and male fears of penetration, reframe David’s play for divinity as a monstrous reflection of those who would presume to control human reproduction and women’s bodies.

Of course, reproduction and gender aren’t split down clean binary lines; people with various reproductive organs identify with a variety of gender identities. But bodies don’t have a way of shutting down pregnancy in case of rape, and it was Shelley and not Byron who wrote “Ozymandias.” It isn’t an accurate worldview that’s being examined here, nor a self-aware one.

David’s delusions of grandeur elevate him above the humanity, but his love for certain elements of humanity makes him a hypocrite. He loves great art, particularly music and poetry. He admits to Walter that he was in love with Shaw and forces a kiss on Daniels, asking her if that’s “how it’s done” before trying to go in for another. So he likes humans for the things that give him pleasure, gave him life, and, as individuals, appeal to him. But when it counts, he thinks it’s their place to have their bodies ripped apart and their DNA repurposed as the xenomorphs. Which is all very well for David, since the creatures pose no threat robots.

David thinks it’s his due to dictate the fate of the human race on the macro level, but another hallmark of Alien films is how contained and claustrophobic they feel, with Earth many light years and cryo-sleep REM cycles away, and the rest of the colonists frozen and largely unseen by the audience. This micro focus highlights both David’s humanity and the electronic privilege (if you will) he embraces as he disconnects himself from the idea that he owes humans protection, loyalty, or anything resembling respect. It is David’s cognitive dissonance paired with his entitlement that recalls the underlying sentiment of far-right rhetoric regarding reproductive rights. He is human enough that his actions are a betrayal, but since he can never fall prey to a xenomorph himself that betrayal becomes an active act of oppression.

Plenty of science fiction and fantasy properties involve more powerful beings trying to wipe out humans or use them towards some kind of nefarious end, but this angle in an Alien movie feels much more personal, especially if you are affected by things like Planned Parenthood’s potential defunding. Remember, the facehuggers and the exploding chests are a metaphor for rape and pregnancy. These sexualized attack and death scenes are noticeably skewed towards male characters. Throw in an androgynously costumed heroine, and you’ve got a commentary on the normalization of sexualized violence against women in film. Alien screenwriter Dan O’Bannon said it best in the documentary Alien Saga:

But this time we have David pushing this line of subtext to its logical, textual conclusion. The xenomorph is a monster, and easily categorized as such. Despite the reveal that its DNA is partially human, there are no philosophical debates about what it means to be a xenomorph versus a human. The xenomorph is a slobbering demon, and less a metaphor for an actual rapist than the spirit of violence and sexual fear. David, however, is not only physically identical to a human, but with his poet mix-ups and high emotionality, he is human in all but organic material. The engineers from Prometheus also wanted to exterminate humanity, but David’s malice is much more personal. And when you add that layer into an entire film franchise concerned with rape and birth, that sense of entitlement and exercise of privilege inevitably brings to mind images like this.

Obviously this reading doesn’t work as a neat one-to-one comparison. Anti-choice lawmakers aren’t purposefully trying to exterminate all women the way David hopes to destroy mankind. But like The Handmaid’s Tale, Covenant offers a look further down that line of thinking, and it does so by building off Alien’s trademark move of “attacking [men] sexually.” David is a monstrous reflection of the kind of entitlement it takes for anyone to dictate the purpose of someone else’s body, especially when they themselves will never have to deal with the repercussions. Most monstrous of all is that because sexual violence towards women is so normalized, both in film and in life, that it takes a movie where it is the men who are in sexual peril for a character like David to be so terrifying.

Chelsea Ennen holds a master’s in Contemporary Literature, Theory, and Culture from King’s College London. Her writing has appeared on The Female Gaze, The Tempest, and HelloGiggles and she is a book critic for Publisher’s Weekly and Kirkus Reviews. She is the Entertainment Editor at The Tempest, and the Fiction Editor at the Kaaterskill Basin Literary Journal. Follow her on Twitter (@ChelseaEnnen) for updates on her creative work and inane pop culture commentary.