A Passing of the Torch | The Mary Sue

A Passing of the Torch 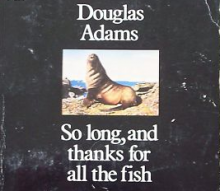 Though it might not appear to be so to the casual reader, should he or she bother to wonder where these neatly wrapped daily blog posts come from, running a site like this is a full-time job. Since Geekosystem launched a year and a half ago, I have written 2,716 posts, some of which are works of analysis and reportage that I’m quite happy with, some of which may mildly embarrass me should they come up when someone is Googling me a few years down the road, and some of which appear to consist of little more than thinly repackaged cat videos. Note that there is little if any overlap between these last two groups.

But all good things must come to an end, and as I prepare to head back to school this coming fall, this is my last post as managing editor of Geekosystem. That duty will pass along to James Plafke, in whom I have the utmost confidence not to crush and ruin the site that I have poured my time and energy into since its birth. (In truth, James is great and the site is in capable hands.) I have learned so much from running Geekosystem, and I am grateful to Dan Abrams, the site’s publisher, for having faith in me and giving me a chance when I was an untested recent college grad.

Blogging and ‘real’ journalism are for the most part two different things, but though it lacks the latter’s glamour, the former, I have learned, is a legitimate and tricky craft. While it tends more towards the ‘flow’ side of Robin Sloan’s “stock and flow” equation, blogging requires a speedy assimilation of a lot of information from a lot of sources as run through the grister of skepticism, since so much of what is out there in the news can be sensational or inaccurate. And when you have over a million people reading you each month, well, you will soon have any mistakes quickly (and hopefully, politely and instructively) pointed out to you.

I’m sure longtime readers can recall times we have lapsed in this respect, but I’ve tried to make the site a place that our readers can find cool, entertaining, informative, and generally interesting things in tech and broader geekdom, all without spicing stories up with fake controversy, going in for hoaxes or ‘viral marketing’ without calling them out them as such, or falling prey to Betteridge’s Law of Headlines. And Geekosystem will continue to be such a place, as well as an excellent repository of robot and/or cute animal videos.

I will miss working in this role with my friends and colleagues at Geekosystem, The Mary Sue, and Abrams Media, though I’ll of course drop back in for office games night sometime. I will miss my correspondences with other bloggers, and I will miss Geekosystem’s perceptive, witty, and unusually attractive community of readers. Though the Internet is often perceived as an impersonal, anonymous space, I have had the good fortune to meet many wonderful people during my time here, both online and off, and I hope to maintain these friendships even as I vacate the cathedra of magnificent power that is posting some stuff on a blog.