Review: A Little Chaos’ Most Interesting Aspects Are Buried Under Layers of Unconvincing Romance 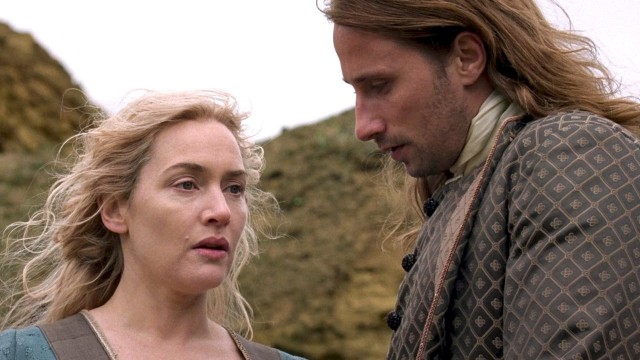 Considering how beloved Alan Rickman and Kate Winslet’s previous collaboration was in Sense and Sensibility, a period film reuniting them should have been released with considerable excitement as a bit of alternative programming this summer. Instead, A Little Chaos barely found any buzz when it premiered as the closing night film at the Toronto International Film Festival, made its way around relatively few festivals, and was released last week to very minor fanfare (with the exception of Rickman’s amazing Tonight Show appearance). Why did Alan Rickman’s sophomore directing effort (after his underrated The Winter Guest, starring Emma Thompson) get received as a limp noodle? That is the big question surrounding the film.

Well, the truth is, while the movie is beautiful to look at, with gorgeous score, and boosts impressive sets and costumes, it’s also a boring romance that suffocates what could be an interesting story which, like Sense and Sensibility, attempts to infuse contemporary feminism into a period story. Which is too bad, because it is very clear that Rickman (and his cowriters) have a feminist leaning they want to highlight, and which benefits the larger story of marriage and love in the French Royal Court. And there are several lovely, smart, and engaging moments when the film’s look at these lives at looked at with a surprising amount of empathy from the characters and filmmakers. There are arguably three scenes which could be considered brilliant … but they are easy to overlook in this movie about an affair which seems without motivation—about two characters who completely lack chemistry.

Kate Winslet should be ideally suited to play Sabine, a landscape architect (long before most women had any work, let alone a career), considering her skill at playing sexually and professionally liberated women ahead of her time. She is hired by Andre le Notre (Matthias Schoenaerts) to build a garden in Versailles, because unlike the yes-men also in contention for the prestigious job, she enjoys a garden with a bit of chaos (strange what they called chaos back then).

She needs the job desperately, not because she is financially desperate, but because she is still mourning the death of her daughter and husband. This loss mirrors the loss King Louis XIV (Alan Rickman) suffers during the film, as did her marital difficulties mirror the lives of Stanley Tucci’s Philippe, Duc d’Orleans, and Andre and his own wife, who had an affair and led to their marriage being in name only. Philippe is married with children to Paula Paul’s Princess, but is in love with Jamie Bradley’s Marquis Du Vasse … and Princess is aware of this fact and claims to be happy with the arrangements they have settled on. The king had an affair with an aging, intelligent member of court (Jennifer Ehle) but also admits to having loved his child bride who gave birth to their children, in his own way.

All this should make for an interesting exploration of domestic life in court, and how marriage has evolved over time. And as I said, there are at least three moments which go deep. Paula Paul is excellent with Tucci, telling Winslet of her choice and acceptance of her husband’s bisexuality. And there are few scenes that nail “silent suffering” better than when Winslet sits with the ladies of court and shares her grief over losing her child, only to realize how many women suffered similar loss at that time. And Winslet and Rickman still have their old chemistry, which they showcase brilliantly when they sit in a garden discussing his late wife’s diary … it’s a lovely scene that says things which are both specific of their time and status, but also surprisingly universal.

But then we have Winslet’s scenes with Schoenaerts, which are just so corny in that harlequin romance way. Winslet is a fabulous actress, but this was just not the right role for her, and she often seems lost. Schoenaerts just gave a great performance, as another romantic lead, in Far from the Madding Crowd, but here he is just a wet blanket who seems to struggle with every grand romantic line he’s forced to say. Winslet and Schoenaerts have no chemistry, and the way the film puts the romance front and center, rather than allow a quiet, respectful friendship to blossom and evolve, makes it just an annoyance.

Watching the scene between Winslet and Rickman in the garden, I was reminded of two movies: Remains of the Day and Mrs. Brown (the latter from cowriter Jeremy Brock). Both films dealt with attraction to unavailable people, and did it so much better than A Little Chaos. The total disregard for Andre’s marriage to the film’s villain (a very hammy performance by Helen McCrory) is laughable. Had she been treated better in the film, and seen as a real woman forced by the same social conventions which make her husband so unhappy, the film would have been far more interesting story. Instead, she is nothing more than a nuisance to the lovers we’re supposed to want together … but don’t. Especially considering a late reveal about her own marriage reminds us that Sabine is still the “other woman” in this relationship.

Thematically, the film wants to tie the physical construction of this kind of new, fresh, modern garden into a new way of looking at love and marriage (only among the upper class of course). And when those thematic ties come together, the film really works, making it far more than a very British costume drama about France. But too often, those ties are sacrificed for what seems to be a commercial approach to love stories that plays down to the audiences. More time with the court would have made the final moments when we see the garden in all its glory far more evocative and thrilling. Because Rickman clearly wants the ending shot, showing the garden is tucked away from prying eyes, to say something about love being a private, personal matter, which is a comment worth making.