Which 3G and 4G Networks are the Fastest? 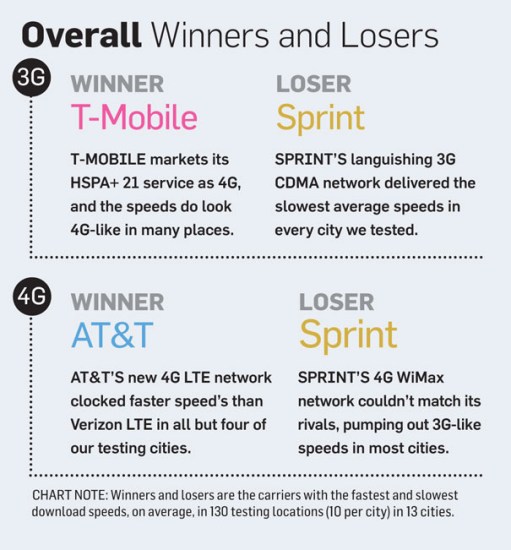 Because we can’t help incite enough wireless network flame wars, we’re going to start the morning with what we’ll call an “update” to the usual comparison between wireless network speeds in the United States. PC World performed a little test between major carriers, and the results are actually a little more surprising than what you might’ve guessed.

The test measured wireless service in 13 major cities: New York, Boston, Chicago, Los Angeles, Las Vegas, Atlanta, Dallas, Denver, San Francisco, New Orleans, San Jose, Washington D.C., and Seattle. The test shows that 3G is actually keeping up with what some may call the explosion of the smartphone and data-heavy mobile market, and speedy 4G is already becoming common amongst the larger of the country’s cities.

But the study also looked for the information you most want to know so you can call your friends on a service different from you and tell them how they should switch to your shining example of a mobile carrier. The results showed AT&T’s LTE network provided the fastest 4G download speeds, T-Mobile’s HSPA+ 21 service delivered the best 3G speeds, while both networks provided decent speeds for the network categories in which they weren’t the top provider. Verizon’s 4G networks are available in many more areas than other networks, and they provide the best upload speed, but both their 4G and 3G do not provide the fastest download speeds. Unfortunately for Sprint, they were found to be lagging behind in each category. 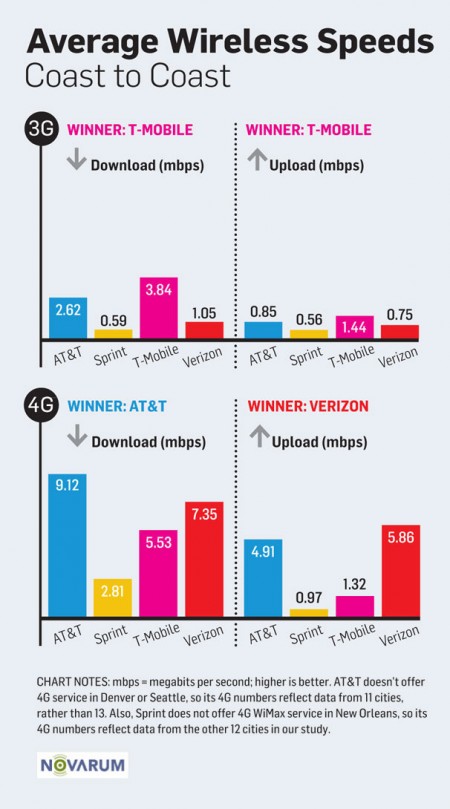 If you aren’t too happy with where your preferred network fell in the rankings, you can check out detailed breakdowns of each network in the study: AT&T, Sprint, T-Mobile, and Verizon. Happy yelling at your friends, telling them you told them so!