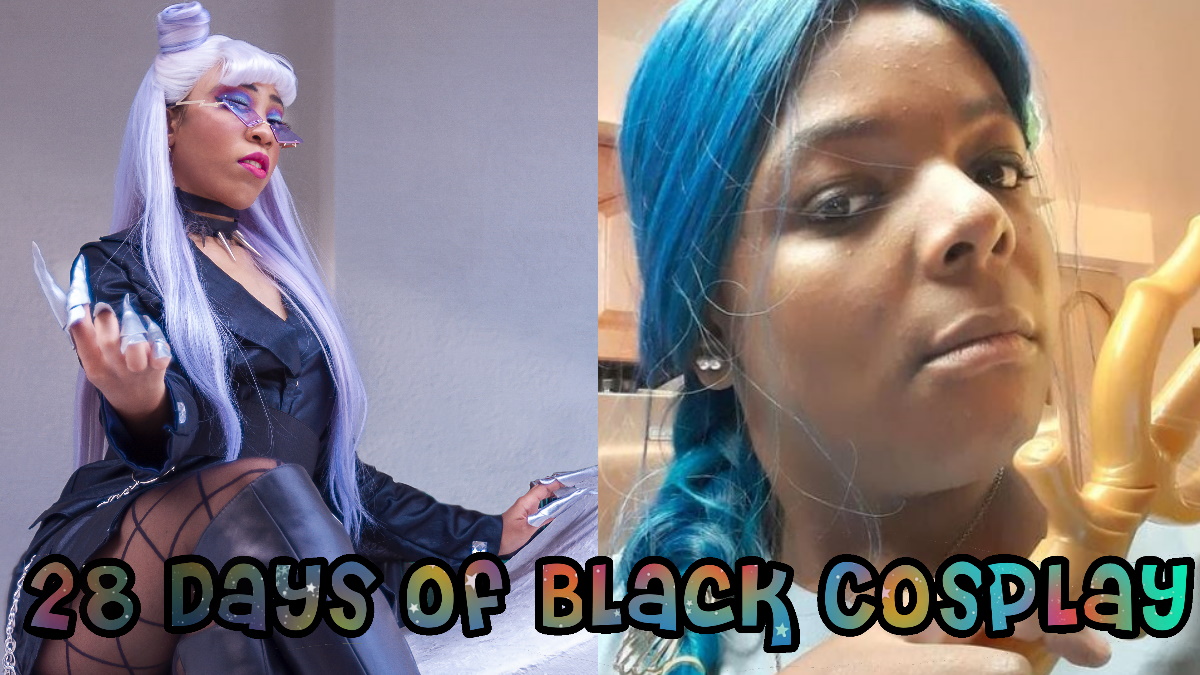 Welcome to the second weekend in our #28DaysOfBlackCosplay share-a-thon! On this fine Saturday morning/afternoon/evening/2AM trip to the bathroom which technically makes it Sunday, we’ve got two more wonderful cosplayers to feature in our continued celebration of Black excellence in cosplay.

PaperMoon02 has been cosplaying for a little over 10 years. They were already a frequent con-goer, but decided to try dressing up just to see what it was like. 10 years later and they’re still dressing up, having way too much fun as they wear all the pretty outfits they can. You can check out their story below.

TMS: How do you decide what you’re going to cosplay?

PaperMoon02: I like picking characters with cute outfits, I do a lot of Monster High cosplays so it makes sense. I just am drawn to characters with a killer sense of style.

What cosplay are you most proud of? And yes, it’s absolutely ok to say ALL.

All of the cosplays I’ve done has some aspect I’m proud of. 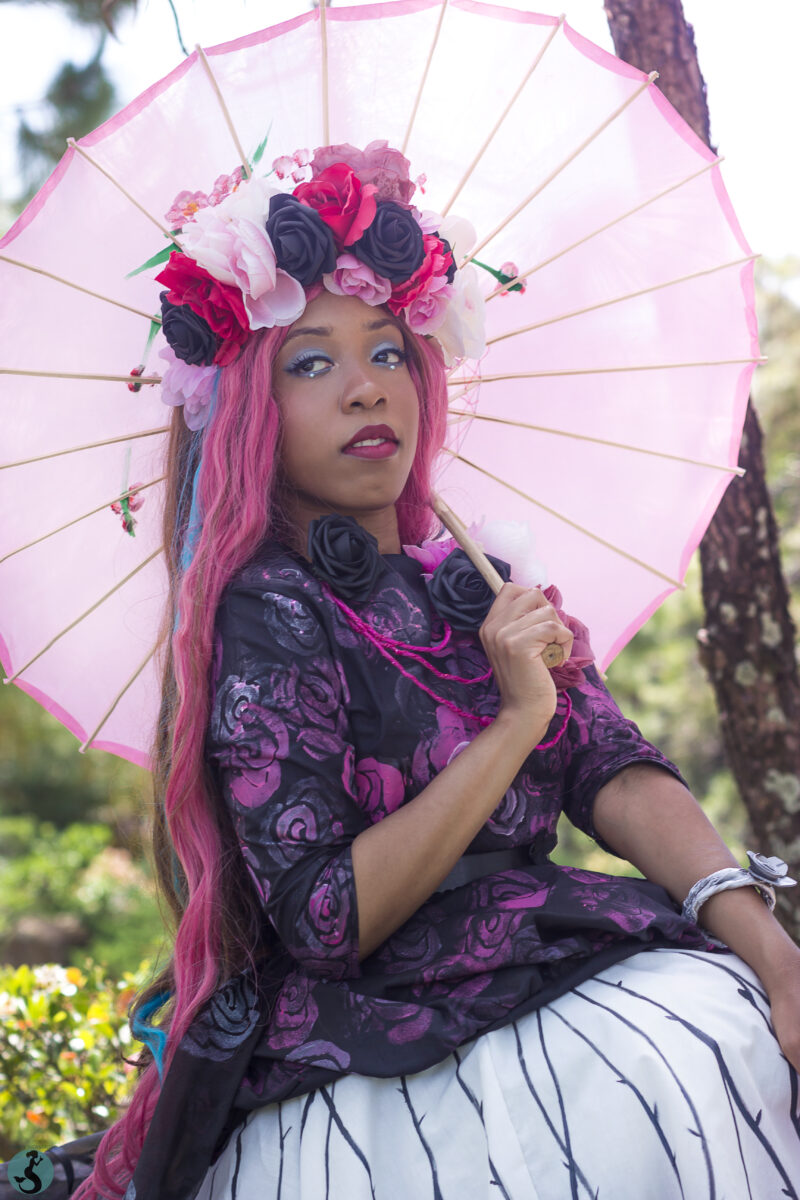 Hey, it’s time to take a break from making that cosplay or buying it off your wishlist, what are you watching/playing/reading to unwind?

I read a lot of manga and watch some childhood favorite shows to relax. Currently, I’m rewatching all of Code Lyoko since it’s back on Netflix!

It’s cruel to ask what your favorite cosplay is so what are your top three (at most)? Are they the ones being featured or are they different ones?

My top 3? Art Nouveau Megara, Evelynn (which is featured), and Casta Fierce! 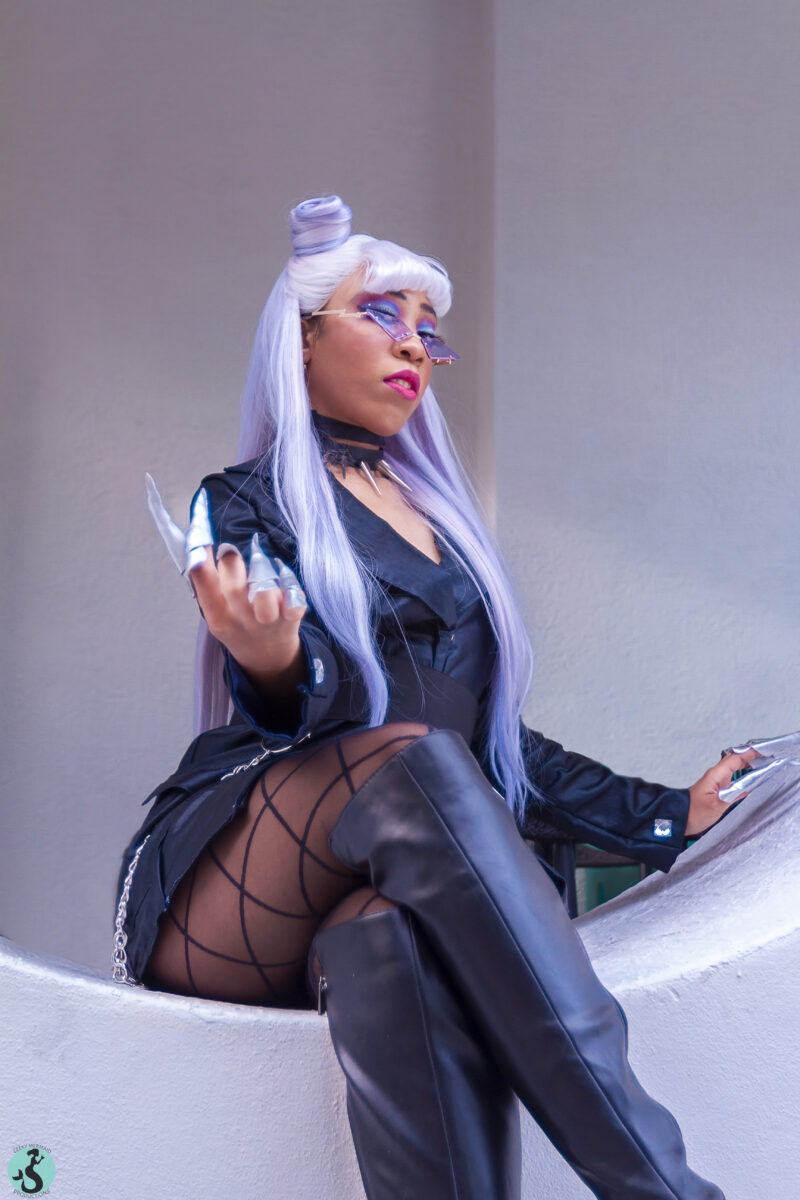 What do your 2021 cosplans look like? If you’re trying to keep it secret OR you have no plans, that’s fine!

In an alternate universe where money and resources are plentiful, all your bills are paid, and you’ve got nothing but time, what dream cosplays are you doing?

Draculaura’s collector doll design. It’s a gorgeous doll and I would love to try and make it. Another would be Lia de Beaumont from Le Chevalier D’Eon.

What does #28DaysOfBlackCosplay mean to you?

There are so many amazing Black cosplayers, to me, it’s a great chance to find new people to follow and support. It’s the one moment when there’s a much bigger spotlight on our work. It’s only grown! When I was starting, it felt like there was no one who looked like me did cosplay, but this is a reminder that there’s a bunch more of us than you can imagine.

Any tips for newcomers who are waffling on whether or not they should cosplay?

Just do it, try it out. I thought it was going to be a one-time thing but I kept at it. I’ve made so many friends through cosplay, it’s changed me as a person and made me look at the media I love in a different light. It’s a chance to be that superhero you wanted to be as a kid. Just try it once, even if it’s not for you, you can say you did it!

What are you looking forward to in 2021? It doesn’t have to be cosplay related, it can be anything.

First time I get to be a guest at a local convention, the pandemic pushed it back but I’m so excited for the chance to be a guest.

Social media time! Tell us where we can find you! Give me as many links as you want. Twitter? TikTok? Patreon? I want it all!

Marissa (Alpha Nebula Cosplay) has been cosplaying since 2014. After she saw all of the talented POC on the cosplay scene, she wanted to participate. Check out her story below.

TMS: How do you decide what you’re going to cosplay?

Marissa: Doing research on how the character looks, looking up costume pieces, and seeing how much it will cost (as well as what season the event that I want to attend is in, so I can dress appropriately).

What cosplay are you most proud of? And yes, it’s absolutely ok to say ALL.

I am most proud of my Merimista cosplay.

What’s a cosplay moment that you remember fondly?

I remember attending Ohayocon 20, and people referring to me in character as Mermista.

Hey, it’s time to take a break from making that cosplay or buying it off your wishlist, what are you watching/playing/reading to unwind?

Speaking of unwinding, who are your comfort characters? Who are you going to when you need a pick me up?

I LOVE Power Rangers, (my favorite season is RPM). My comfort characters in that season are the twins, (Gem and Gemma). The fact that even though they were basically child slaves who were taken from their parents, (and spoiler alert, were forced to work for a shady government organization because of their high IQ), and somehow STILL have a cheery disposition is something that I respect and admire.

Another comfort character of mine is Coco from Crash Bandicoot. She is also a socially awkward genius who builds all of her and her brother’s tech, (including spaceships, teleporters, warp pads, etc), and is an adorable nerd who loves ponies, rainbows, candy, stuffed animals, video games, fuzzy pajamas, and puppies, (all of which are things that I love, too ).

Speaking of ponies, MLP is also a fandom that has a LOT of comfort characters for me. One that comes to mind, is Pinkie Pie, she is just a ball of energy that I can’t get enough of! She also gets bonus points for living in a sweet shop. The Ghoul School Girls from Scooby-Doo, also fall into this category. When I saw the movie being re-aired on Cartoon Network during the early 2000’s while I was growing up, I fell in love with it. I had never really seen monster girls before, and I could relate to them, (seeing as how they were different from other kids, they didn’t fit the mold that society made for them), as a young girl with a developmental disability, that really spoke to me. Every October, (which is also my birthday month), I can’t wait for Halloween because of my love of monsters, and the weird, whacky, spooky fun that comes with it.

If you could live in a fictional universe where would it be and why?

I would want to live in either the world of Animal Crossing, Crash Bandicoot, Steven Universe, The Mushroom Kingdom, Digimon, or Power Rangers. Animal Crossing, because of being able to live in a cutesy world with talking animals, Steven Universe, for being able to live in a world of gay space rocks. Crash Bandicoot, for its large world that seems like a great place to explore and go on adventures in, (including other dimensions), The Mushroom Kingdom, for its diverse ecosystem, cute residents, and going on magical adventures. Digimon, for being able to explore the digital world with your monster companion. Last but not least, I would want to live in the Power Rangers world, due to its vast world-building, opportunities to go on adventures, being able to obtain powers and become a hero, being able to travel to other dimensions, and being able to save people and make a difference.

Living in the worlds of My Hero Academia, Soul Eater, She-Ra, and Monster High would also be cool.

Do you tend to cosplay the character/creature/entity as is or do you put your own spin on them? Any particular reason why? And yes, it’s perfectly ok to say “because I like to.”

Sometimes I play by the book, but once in a while, I like to use my creative freedom in order to make something my own. Sometimes the way I want to portray a character might seem a little out there, but as long as I am not hurting anyone, I can do whatever I please.

It’s cruel to ask what your favorite cosplay is so what are your top three (at most)? Are they the ones being featured or are they different ones?

What do your 2021 cosplans look like? If you’re trying to keep it secret OR you have no plans, that’s fine!

It’s hard to plan (due to not knowing if we will be allowed to attend cons due to the pandemic) but I have a few ideas.

In an alternate universe where money and resources are plentiful, all your bills are paid, and you’ve got nothing but time, what dream cosplays are you doing?

In yet another alternate universe, conventions are safe to return to, so where are you headed?

What inspires you to stay active in the community, especially in these trying times? If you haven’t been active that’s fine, too!

The hope that things will return to normal if everyone does their part to socially distance.

What does #28DaysOfBlackCosplay mean to you?

#28DaysOfBlackCosplay means a time when people of African descent can show off our cosplay accomplishments, share our stories, show our creativity, showcase our hard work, and being around like-minded people with similar interests, celebrating our fandoms and what it means to be Black in the cosplay community, as well as the Black nerd community.

Continued support for the Black community not just in nerd spaces, but in society as well.

How can the community (people, events, ect.) do better to represent you and other Black cosplayers?

Showcase the wonderful creativity and hard work that we do, not just in February but year-round.

Any tips for newcomers who are waffling on whether or not they should cosplay?

If you want to do something (as long as it doesn’t hurt anyone) then go for it.

What are you looking forward to in 2021? It doesn’t have to be cosplay related, it can be anything.

I hope that we will be able to recover from the COVID crisis and resume being able to attend cons, music festivals, pride events, family gatherings, and other social events.

Social media time! Tell us where we can find you! Give me as many links as you want. Twitter? TikTok? Patreon? I want it all!