As 24 Ends, A Look Back At Jack Bauer’s Journey 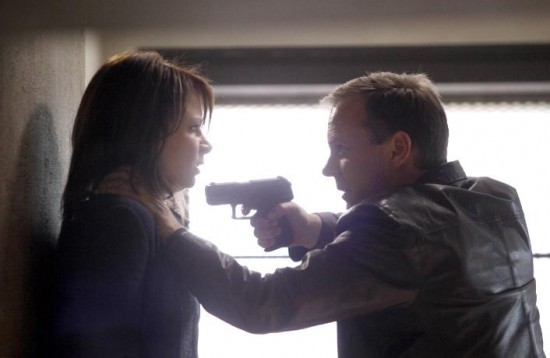 This essay covers the entire life of the series 24. There are plot spoilers, especially from season eight and yesterday’s series finale.

Does the end justify the means? This question has found its way into the plot of every season of 24, and made itself perhaps most prominent in the eighth and final season, which came to a close last night. CTU agent Jack Bauer, our gruff, remarkably well-aging hero, seems to have some controversial views on the subject.

There are a few things you can be fairly sure will crop up in a season of 24: a mole within the U.S. government, a nuclear device or biological weapon, an unexpected character from the series’ past, and torture. Lots of torture.

Perhaps the most widespread criticism of 24 (besides the fact that nobody ever uses the bathroom) has been that it takes too positive a stance regarding the efficiency and propriety of torture. Not a day goes by on 24 in which Bauer doesn’t torture at least two people, usually more. This season would have been the writers’ final chance to turn around officially, but they didn’t. Sure, Jack has been tried for his criminal methods of information-gathering, but nothing came of it. He gets away with torture, then keeps on torturing.

I know it may seem this way, but I’m not trying to come off myself as a die-hard anti-torture advocate. My personal politics aside, the fact is that the show took a controversial stance that goes against the values of our people and government. And to me, that’s what made 24 so special.

24 took risks. It looked at controversial issues and presented us with terrorist plots, some of which worked out semi-successfully, in a time when people are more on edge about terrorism in this country than ever before. You have to admire the show for innovating and looking outside the box. The entire concept of the show – to have events occur in real time – was in itself a great twist on television as a medium. It also brought us a black president and a woman president, each before its time in real life.

So how does a show that’s always challenged the norm send itself off? What do you send as your final message after eight seasons of political and social commentary? Apparently, that the end doesn’t always justify the means, even for Jack Bauer.

For the past few weeks, Jack has been on a rampage, murdering those responsible for the assassination of a foreign president, but also for the assassination of his friend and lover. The President has been trying to keep the assassination plot a secret, involving herself in a conspiracy violating international law, but she does it all to protect a peace treaty from being abandoned. In the series’s final moments, the President withdraws from the peace process, announces her involvement, and brings herself to justice. Even for a goal so noble as peace, the end does not always justify the means. 24 has, at least in some ways, redeemed itself – not just with its political message, but with arguably its best season since the show premiered.

But that’s the beauty of a final season. 24 has always taken risks, but it had the freedom to do so even more know that it could put its protagonists in situations from which they genuinely could never recover. They didn’t outright kill Jack, but after what he did in those 24 hours, he’s never getting work in this country again.

It’s been a wild ride. Sure, I’ve yelled at the writers through the screen, telling them to send a character to the bathroom, or that Jack can’t be revived after being dead for ten minutes then immediately kick some terrorist ass (yes, that happened). But most of the yelling has been in excitement. “Don’t go in that room!” “Jack, look out!” “She’s the mole!” 24 didn’t just go outside the box to create a gripping television program. It took the box hostage, tortured it, then blew it up with a nuclear explosive.