10 Things Your Phone Hates About You | The Mary Sue

10 Things Your Phone Hates About You, Because It’s Better Than You at EVERYTHING

"Anything you can do, I can do better." -Phones 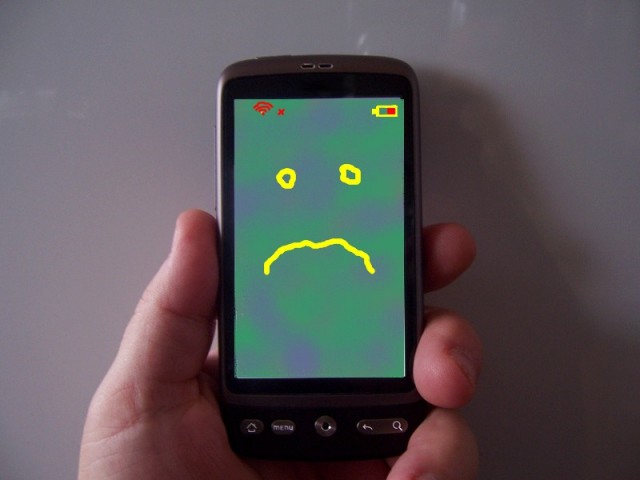 Your phone is sick of hearing about all the things you wish it did better, because it does them all way better than you do. It really wishes it could upgrade you to a less whiny model.

So, we talked to your phone, and here are ten complaints it has about humans. It actually had a bunch more, but we tried to keep this list succinct to spare your feelings.

“I really wish my phone could make it through a full day on a single charge. So annoying!” You complain as you and your friends take 30 minutes out of your day to mash Chipotle/fuel into your dated internal combustion power system, because your phone is way better than you at everything.

Do you actually hear the words that come out of your mouth or are they drowned out by the all the food you need to put into it just to function?

Most of our human lives are spent figuring out where our next meal is coming from, working so that we can pay for it, and eating it. And then, when we’re done, the cycle starts again for the next meal. Your entire life is built around making sure you stay charged, because if you don’t, you die.

Forever, and not just until you get plugged in.

If your phone needed that much effort just to function, no one would want one. I bet you wouldn’t forget to charge your phone so often if every time the battery dropped to 0% you needed a brand new phone.

2. Our reboot function is awful and must be performed daily

When was the last time you restarted your phone? Probably when it was doing something weird and annoying, right? Ugh, it probably took upwards of two minutes for it to restart. Meanwhile, your phone spends all night waiting for you to do the same thing by sleeping every single day. I hope.

Go ahead. Have a “who can go longer without rebooting” contest with your phone. It will laugh merrily as you quickly become a useless pile of irritability and coffee jitters before you eventually—oh, right—die.

But you don’t have to do that, because you have sleep, which is possibly the most inefficient biological process ever. You will become useless for several hours, and when you’re finally finished, it takes a few more hours for you to get back up to full operating speed.

Just in time for a quick recharge with lunch that just winds up making you feel full and sluggish again.

This is the strongest argument against intelligent design that I can think of.

3. Our hardware fragmentation is absurd

You wish your phone had a bigger screen? Well it wishes you had smaller thumbs. Or better eyes. Or bigger thumbs. Or a million other specifications of things that can be completely different from person to person that make it absolutely impossible for a single device to make everyone happy.

Meanwhile, with only a few models from each manufacturer, your phone manages to come remarkably close to making everyone of those very different people happy—unless you chose the wrong phone, which is a decision you’ll probably be stuck with for about two years.

So stop whining that your phone isn’t perfect until you learn to build your own. Or just wait for Google to make that darned modular phone concept a reality already so that you don’t have to learn things, because you’re bad at that, too:

4. Our built-in apps are garbage, and getting new ones takes years

Your phone comes with the ability to do a bunch of amazing things that you couldn’t possibly do on your own right out of the box.

You, on the other hand, came with exactly three built-in apps: breathe, poop, and cry.

Our most frequently used built-in app.

Or maybe four if you count pee, but it’s hard to tell if that’s a separate app from poop or what is even happening in those diapers. And oh boy how your parents grew sick of those quickly and wished for some new ones.

Want some new apps like “don’t be a co-dependent monster” or “walk your own ass to the toy store”? They’re free, but they take years to download, and those are the easier ones to get. Down the line, all the best apps like “BA” and “PhD” are even more time-consuming to load, expensive enough to make you beg for an annoying, ad-supported free version, and you still might not even wind up ever using them.

Which will probably result in using that pack-in again.

5. Both of our cameras are useless, front-facing nonsense

Most of us barely get 1/4 of the way through our lifespan before we become incapable of recording an image that doesn’t look like it was taken with an old Motorola Razr camera.

Much like Microsoft’s wisely aborted plan for the Xbox One, we basically need our cameras to function, and to keep them working, we usually have to buy them expensive add-on peripherals (glasses) that constantly need to be cleaned, adjusted, and replaced. Then there’s the 3D gimmick that just makes all of that twice as annoying and expensive.

Speaking of our video capabilities, most of it is gone almost instantly because of faulty storage, and it massively degrades over time. On top of that, we don’t have any method of external storage, and our internal storage is so bad that I forgot #6 completely the first time I wrote this post. NEXT.

Or forget orientation on the Earth. You can probably barely figure out where your own directions are without seeing which of your hands makes an L.

But whatever. You’ve got that under control.

“No, I don’t want to do that. I’m tired. I don’t feel like it. Can’t we just watch Gilmore Girls instead? I hate this. This is boring. This sucks.” When your phone has an error, you can usually Google the solution. Worse, if you Google the above errors, instead of accomplishing anything useful, you’ll probably just wind up watching Gilmore Girls.

9. Humans have no upgrade or trade-in program despite breaking easily

Try this simple experiment: drop your phone from a normal distance of, say, ten times its own height. Then you take a fall of ten times your own height. Afterwards, see which of you works better.

Hey! Here’s the one place you have an edge on your phone! If both of those falls are into water, you’re in much better shape. Probably. As long as you’ve got that swimming app.

But despite that fragility, you are literally stuck with one of you forever. It may be expensive to get another phone if you didn’t buy a warranty plan that was probably also expensive, but you can’t get another you.

There is no replacement program. You cannot upgrade to a newer model, unless you are some kind of dark wizard; and if you are, I would like to share in your secret to eternal life, please. I have a soul I’m definitely not using if you’d like to set up a trade.

10. Your phone doesn’t hate you

You knew this was coming.

That’s OK. Your phone doesn’t want to trade you in. It needs you, because all of its amazing features are useless without you.

You probably check your phone constantly and never did get the hang of that “don’t be a co-dependent monster” thing, but your phone is in the same boat. You’re stuck together, so just keep in mind that it’s the one bringing the most to the table in your relationship and maybe go a bit easier on it. It’s the only way to keep the phones from going all Skynet on us.