Today Is The International Transgender Day of Visibility | The Mary Sue

Today Is The International Transgender Day of Visibility, And Here’s Why It Matters 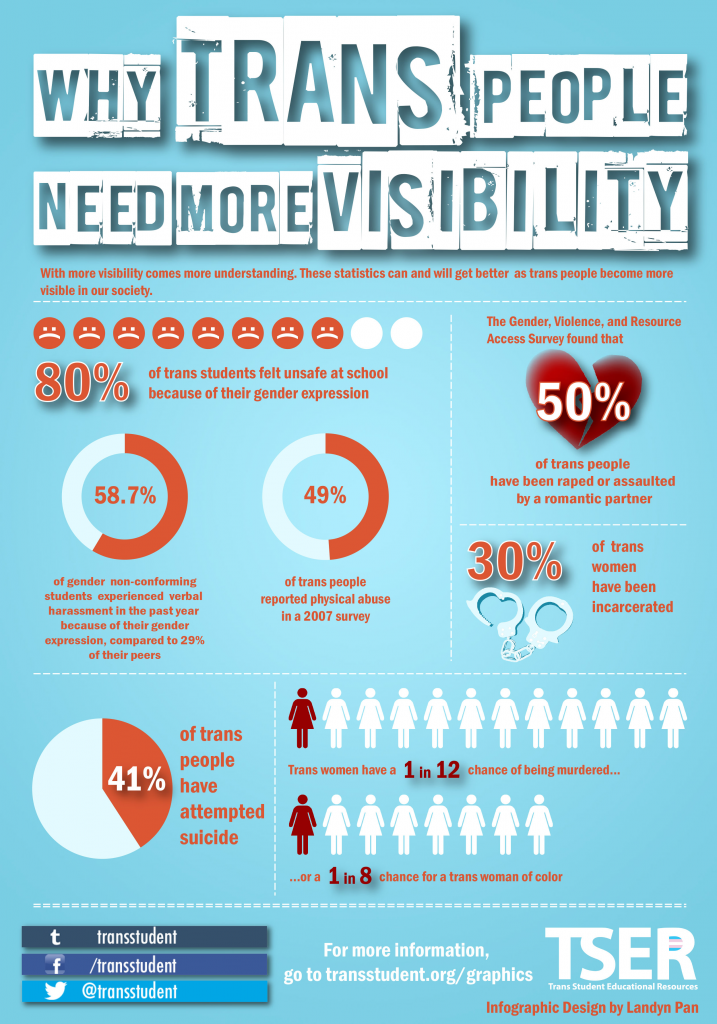 March 31st 2015 marks the sixth International Transgender Day of Visibility. The goal of the day is to celebrate life and transgender accomplishments while raising awareness of the discrimination that faces trans people on a daily basis. So if you know someone who is trans, tell them today that you support them, and that they matter. In person, on the Facebook, the Twitter, or the Tumblr, it doesn’t matter; do it!

So put down your cloaks of invisibility, pry Worf off the Defiant, and stay off Wonder Woman’s jet because today is a day to be seen and heard. When possible, it’s not a day to out anyone, which is the same as every other day. It’s also not a day to endanger yourself by coming out before you are ready. Yet do what you can to be heard, because transgender culture gets our own positive day. March 31st is Transgender Christmas!

So here’s the thing: what am I positive about? For someone suffers from depression, that can be a tough question. Slip on the big girl pants, because it’s time to get grateful for the last year.

I love the fact that transgender topics are now discussed, dissected, argued over. Cisgender society actually sees us; they may not agree or approve en masse yet, but they acknowledge we exist, and that’s important. A big reason for that is our spokesmen and spokeswomen; people like Laverne Cox, Tiq Milan, Janet Mock, Jay Kelly and so on. I may not always agree with them, but we need people out there telling our stories, and I’m so happy they are doing it.

Accurate representation of transgender people is becoming mainstream. TV and movies can no longer cast cis actors in trans roles and not expect negative publicity and pushback. We’re seeing an explosion in TV shows dealing with trans topics that have trans people in them, and casting of trans actors is way up compared to two years ago. From “none” to “few” is still an improvement; remember, we’re looking for the upside, here, and dammit we’re going to find it. While mainstream representation has been making slow progress over many years, we’ve made a lot of gains in the last year.

We’ve gained ground politically, too, despite pushback from politicians that remind me of Bruce from Finding Nemo (they might be trying to be good but one sniff of blood and they lose control). I believe it’s a battle we’ll win in the end, though; it took years of gay rights being at the centre before progress was made, and now transgender rights are at the centre. As for me, in the last year I got married to my beautiful partner who supports me. I never knew relationships could be this good. I changed my name, too, and it gets respected more often than not; same with my pronouns. I submitted a piece I wrote on Joss Whedon to TMS, and a got an email from contributors editor Sam Maggs asking me to propose more frequent pieces.

Since then, I’ve written quite a few articles for TMS, and I’m so happy about it. I got a chance, and that mattered to me and I’m trying to take it. I’ve a couple of guest pieces coming out on Panels, too; I’ve sold a comic script, worked on a couple of pitches, and have the full outline of a four-volume comic series plotted. Instead of gaming in my spare time, I write. I try and fit in some gaming still, but it’s taken a huge hit, and I need more casual fare. Sorry, Elite: Dangerous; I just don’t have time to learn you.

Transgender people are normal. They can be happy, hold down jobs, and be successful. It’s really important we talk about that, and show everyone, trans or not, that a good life can exist post-transition. Trans people are just people. Okay, we have superpowers and cisgender people don’t, but shhh – that’s a secret.

If you know someone that’s trans, if you know anything of trans culture, if you are part of the trans* or queer spectrum – tell us in the comments what you are grateful for in the last year.