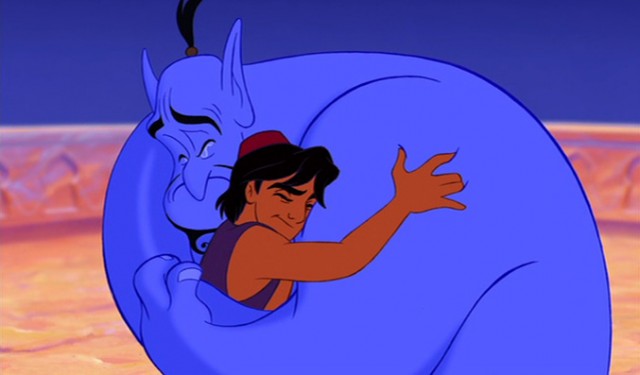 You woke up this morning, and it wasn’t a dream: Robin Williams still passed away yesterday, dead at 63 of an apparent suicide. It’s a cruel irony that one who brought laughter to the lives of so many would suffer from depression, and if there can be any silver lining in a heartbreaking event like this, we hope it increases awareness about depression and the need for accessible, non-stigmatized treatment. (If you find yourself struggling, the National Suicide Prevention Lifeline is available 24/7.)

We, your friendly neighborhood The Mary Sue writers, have each chosen a video to remember Williams by. It’s impossible to narrow his career down to a few short clips, and we’re not trying to do that—we’re just sitting here, being sad, remembering someone with whom we all grew up in one way or another. Feel free to leave a link to one of your own favorite Williams moments in the comments. I think we all could use a virtual group hug.

I’ve heard that liking Hook is largely a generational thing: if you were an adult when it came out you were probably kind of weirded out by it, but if you were a kid, you’ll love it the rest of your life. Obviously I only have my own kid’s perspective on the thing, so: imaginary food fights, prophetic poems, daddy issues, and ambiguously gay pirate duos, yes please, sign me up. There are a number of scenes in Hook that are particularly lovely—any late scenes with Peter and his kids, an earlier bit in which the smallest Lost Boy recognizes Peter Pan in Peter Banning’s middle-aged face—but everybody’s heartstrings are already tugged enough in this situation: let’s settle for Peter and Rufio (that’s a young Dante Basco, voice of Zuko in Avatar, for the folks who never found out) slinging the worst improvised insults a PG-rated film can provide. —Susana

Jumanji’s 6.8 IMDB rating should be considered a criminal offense. It’s a wonderful family film, not to mention how great Williams is in it. He’s generally a wacky, animated comedic genius, but check out this scene in which he has to act using only his face, which he can still barely move. He still gets great physical comedy across and plenty of character and emotion in his lines. I’m also particularly fond of the scene where he wins the game and delivers a line about facing your fears. It’s important to remember in life that being brave is about overcoming your fears, not being fearless, and Williams in this movie never let me forget it. —Dan

This is the first video I thought of when I had heard that Robin Williams died. It’s hard to lose people, whether you really knew them or not. If someone we know is depressed and going through a rough time, we want to do everything we can for them. On the other end, being depressed can make a person feel guilty.

Depression is a deep and complex problem for both sufferers and the people who care about them. However depression affects you or someone you care about, it’s important to remember: It’s not your fault. —Glen

My Mom showed me Dead Poets Society when I was young and impressionable, and I know Williams’ performance alone did a lot to cement my love for acting and writing and other impractical but deeply, deeply important things. After hearing how he died my first thought was this end scene from the movie, not just because (like another famous performance of his) it deals with suicide and forgiveness, but also because I think the outpouring of grief for him and his family demonstrates a similar show of allegiance. He “captained” so many of the movies that made us laugh and gave us hope, and now “the fearful trip is done,” all we have is our appreciation. —Carolyn

Approximately 100% of the references in this Mrs. Doubtfire scene went right over my head when I was a kid, but I still thought it was one of the funniest things I’d ever seen in my short life. Robin Williams commits. Also worthy of a second (third, fourth, hundredth) watch if you need a smile on this sad day: His legendary (legendary, I say) impression of a hot dog. —Rebecca

When I got my very first MP3 player as a young teenager, the first thing I did was scrounge through my parents’ CD collection to put whatever I could find onto it. That’s how I first heard Robin William’s Live At The Met, and it’s a good thing it was a digital version I was listening to, because I would have worn the thing out with the amount of times I played the album. Even when you aren’t actually watching him (although you can, above), you can still feel the energy Williams brought to this comedy special, and while many of the references are dated now, his delivery and passion keep most of the the jokes relevant and funny. —Victoria

Including Sleeping Beauty and Lilo & Stitch, Aladdin is one of my all-time favorite Disney animated films. As many have been saying since he passed, Aladdin was one of the only film roles that could keep up with the energetic performance of Williams because, well, it was animation. But his personality and charm shined through regardless and made for an incredibly memorable role. One of many for this talented actor. —Jill

And if you need more Robin Williams right about now:
Robin Williams And His Daughter Zelda In A Commercial For Zelda
Robin Williams on The Legend of Zelda
Little Girl Saves Mom From Choking Because of Mrs. Doubtfire
Cinefix Made a “Homemade” Version of Rufio’s Big Fight Scene From Hook With ACTUAL Rufio!
The 10 Best Christopher Walken Impressions