From the show's third season. 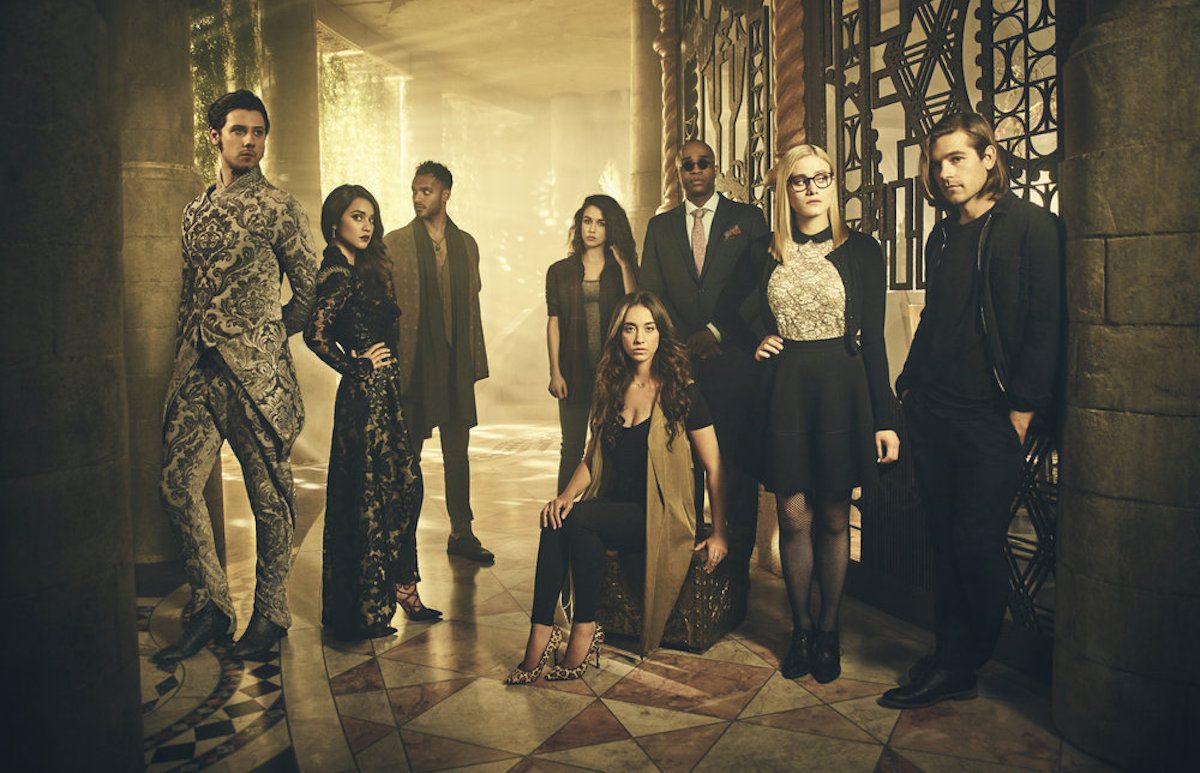 Syfy’s The Magicians has always worn its intentions on its sleeve, requiring only a wobbly first season to grow confident in its stance. Season one, based on the popular series of books by author Lev Grossman, was well-received by fans of the fantasy novels, even when it took narrative detours, as it kept in line with the “edgy” Chronicles of Narnia and “sexy” Harry Potter atmosphere it was trying to promote.

By season two, it had shaken off of its too-familiar fantasy/science fiction settings to embrace something darker, stranger, and wholly its own, with a declarative voice that was unabashedly, singularly unlike anything else on television. While the sophomore season was decidedly stronger than its entertaining debut—especially as the show fixed the issue of Quentin, our status quo “hero” in season one who comes to realize he’s really more of a supporting player, and actor Jason Ralph grew increasingly assured and empathetic in that role—it was season three that fully defied expectations and became something magical.

That’s ironic, considering it’s also the season where the characters must grapple with the loss of magic in their world and embark on a quest to get it back. As is the case with any great fictional, fantastical world, what marks The Magicians as one of the greats in not just its genre but the past decade on the televised landscape has been detail-oriented world building, compassionate character work, and a playful knack for taking risks that manage to sing to the show’s tune, rather than deviate for the sake of shock value itself.

Season three married all three of these concepts beautifully, strong from the moment the characters appeared to us lacking magic and in dire need of some hope, all the way until that hope had been fulfilled, only for it to be shattered once again. Here are five moments in particular that showcased why The Magicians is one of the most daring and intriguing shows currently airing, as we wait for the fourth season premiere tomorrow.

For all that the show pretended to be mainly about Quentin Coldwater in season one, the hapless hero type who somehow stumbled himself into leading man status despite (at the time) infinitely more interesting supporting players, it was always clear that much of the heart and humor would come from those supporting roles.

Arjun Gupta’s Penny—a traveler who could both jump between continents and realms alike—who was a forcibly harmonious foil to Quentin’s more uptight nature instantly became a fan favorite. Sardonic and cool under pressure, he shared incredible chemistry with every screen partner, particularly love interest Kady (Jade Tailor) and, in his own right, was as much the unlikely hero as Quentin.

This is further explored in the fourth episode of the third season, after he’s seemingly died from a magically inflicted disease, while in reality, he’s managed to project himself onto the astral plane. The episode imbues the storyline with a satisfying patience as we spend the majority with Penny, the rest of the characters on the periphery as they deal with their varying levels of grief, while he desperately tries to communicate with them.

It disrupts what we’ve come to expect from the show’s typical ensemble format while similarly demonstrating how any character could lead any given episode due to the charisma of the performers and distinct energy and backstory they each bring to their own story.

The Beauty of All Life

If there’s one definitive moment/sequence of season three (and clearly it’s near impossible to pick simply one), most would argue in favor of the montage in “A Life in a Day,” the season’s fifth episode. The entire thing is wonderful, with pairings such as Julia (Stella Maeve) and Alice (Olivia Dudley) that don’t often get to share screen time showcasing just why they’re such perfect counterpoints for one another, but it’s the sequence with Quentin and Eliot (Hale Appleman) that stands out above the rest.

The two have gone back in time for the sake of their quest to retrieve a key that is gifted from the completion of a mosaic that, when completed correctly, “reflects the beauty of all life.”

What was meant to be an adventure for a few weeks turns into a lifetime, one spent together intimately, with Quentin marrying a woman and having a child, both raising said child once the mother dies, and spending the rest of their days together in a small cottage they’ve managed to call home. Not only is it a reinforcement of the show’s commitment to representing sexual fluidity (particularly with Quentin and Eliot), but it also manages to take such a grand idea about life’s beauty being in the details and relationships shared and condensing them into a montage running under ten minutes.

It’s as poignant as anything the series has ever done—and maybe will ever do—completely harmonious with its heart and whimsy, and when the key appears following Eliot’s death, showing that it was their time together that was so reflective of life’s beauty, it’s indicative of how we’ve come to care for them as we don’t question the logic at all.

If there’s been a constant throughout the seasons so far—and really, throughout much of YA/fantasy and science fiction—it’s how they apply otherworldly events to very real emotions we process while our lives are in flux. The magic at Brakebills and the conflict the heroes have found themselves in are reflective of personal hardships and the pressures of being in your mid-twenties, still figuring out the chaotic world while being expected to have it all together.

From Julia processing trauma to Margo (Summer Bishil) growing into a confident and compassionate woman beyond her initial socialite status, The Magicians has never shied away from painting a bigger picture with genre-focused concepts. One of the biggest ones has been Quentin’s depression, which rears its ugly head in “Do You Like Teeth?” a tale sending him on his own adventure to find another key.

The key in question creates an alternate version of the holder, digging from the darkest depths of their mind to try and goad them into committing suicide. The previous holder thinks Quentin will be fine but, we know him and know that he has largely been his own greatest enemy, making the inanimate foe all the more threatening.

It’s a subtle and intuitive way to depict depression, and in the same episode where a dragon appears near a sentient ship, the showrunners really could’ve run with the idea and try to have the manifestation of his darkest thoughts appear as a literal bloodthirsty monster. Instead, it’s who really knows you who’s always the biggest hurdle, and who knows you better than yourself?

Quentin knows all of his insecurities, all of his doubts and past mistakes, so of course it would be an alternate version of himself that would be best equipped to break his spirit. It makes it all the more rewarding when the unlucky Quentin manages to overcome in the end.

The showrunners of The Magicians seem to take gleeful pride in breaking tradition, be it in the form of caustic wit or musical interludes—or a character named the “Giant Cock,” who points Eliot on the season-long quest—but perhaps one of their most ingenious pieces of storytelling came in “Six Short Stories About Magic,” which gave periphery characters the spotlight.

The results were stunning, particularly the one focused on Harriet, the daughter of The Librarian. Played by deaf actress Marlee Matlin, the fifth portion of the episode is from her point of view, and the show makes the visceral decision to simulate her hearing impairment for the viewer, giving the proceedings a fishbowl effect as she converses in sign language.

Beyond that, however, what makes it stand out as a piece of storytelling is that it never results in a gimmick—it isn’t told in this manner to lure in a greater audience but to amplify the narrative itself, something that raises the stakes and the tension as we watch Harriet fall into increasingly perilous situations.

It shouldn’t be a novel concept, but the fact that the show has been so inclusive in its casting—from Matlin to transgender actress Candis Cayne as the Fairy Queen, and a leading crop of characters with only one straight white guy in the mix—helps in making story tropes long seen before feel modern. It should be the standard, not an outlier in terms of diverse casting practices.

When a visual, artistic medium is able to incorporate music in a manner that not only complements but elevates the story, it transcends any other. Music—or the lack thereof—is crucial to the emotional throughline of any story, possessing viewers in a way only television or film can as it impacts multiple senses. Season two of The Magicians had already played with musical theatrics with a “Les Miserables” homage, and with that success, they based an entire episode around the theme for one of the more emotionally rich storylines of the series.

In particular, that applies to the “Under Pressure” sequence, where all of our leading characters join together to sing to save a friend who has often been left behind, and there’s a deceptive ingenuity in the writers’ reliance on some of the actors’ real, sometimes flat vocals that can’t always rival other cast members’, like Appleman’s, or especially Tailor’s.

The desperation rings true because only a group at the end of their rope would attempt something so inherently silly. In a season where our characters are torn apart more often than they came together, a sense of euphoria fills the screen as they belt—out of tune—David Bowie and Freddie Mercury as impossibilities are realized and a sense of hope is injected back into their lives.

Season four picks up after a devastating loss for the characters. Second only to The Good Place in terms of how often they hit the reset button, The Magicians is fearless in tackling new manners of storytelling through familiar tropes and archetypes with the knowledge that they’ll all be gloriously deconstructed to reflect their messy, true-to-life dysfunction as these characters live another day and try to confront past demons, achieve new triumphs, find love, and endure loss, all the while trying to maybe even save magic for good.