The Internet Is Losing Its Mind Over Ghostbusters: Afterlife‘s New Ghost, Muncher

Look at this gloopy blue buddy. LOOK AT HIM. 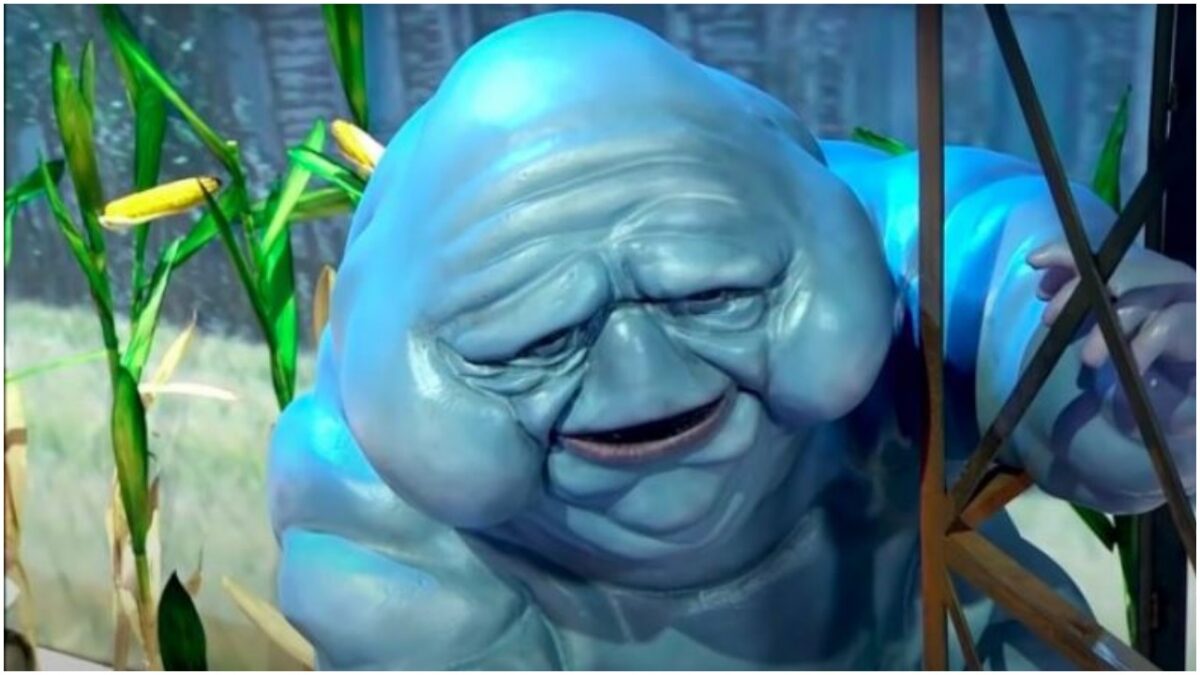 It was announced yesterday that Sony has pushed the release dates of several of their big tentpole films, including Ghostbusters: Afterlife. Jason Reitman’s highly anticipated sequel to the iconic horror comedy franchise will debut on November 11, 2021. But as we wait for November to arrive, the internet has gifted us with a sneak peek at a brand new ghostly cast member. Friends, meet Muncher: he’s blue, he’s gloopy, he’s vaguely sexual, and he’s here to haunt your dreams.

The photo comes courtesy of an unlikely source, MasterChef Junior: Spain, which featured an episode challenge based on the film. The site Ghostbusters News also gave us a glimpse of Muncher, who is featured in the upcoming toy releases accompanying the film.

Clearly inspired by iconic ghost Slimer, Muncher is a blue, chubby phantom that resembles a tardigrade crossed with Ernest Borgnine. He’s kind of a mess, but the internet has grown to embrace him. If Gritty was the meme king of 2020, Muncher seems poised to take the crown in 2021.

Muncher has already inspired a host of tweets, ranging from the celebratory to the confused to the profane. It doesn’t help that the name Muncher has sexual connotations, inspiring people to regard the character as a “Slimer that f-cks.”

Jason Reitman explains in a new interview that Muncher's main motivation is that he must fuck "or else he dies". pic.twitter.com/BG0nty496T

we call it "muncher" pic.twitter.com/LEf72TV9yp

There's a new character you're all going to love and his name is "Muncher" pic.twitter.com/0KhtH01QDa

muncher is gritty for people who understand it’s over

The dream of course is to make two acclaimed micro-budget independent films and then get tabbed to direct The Muncher: Origins, the extremely dark second reboot of the Muncher Cinematic Universe. https://t.co/eV7u4X4HEc

in the spirit of unity I think it's time for America to come together and support Muncher. he's doing his best https://t.co/GpDsR9LCIa

The Oval Office bust of Winston Churchill has been replaced by a bust of Muncher. “Love that dude,” says President Biden.

Imagine your kid opening up their Happy Meal toy and it's Muncher https://t.co/AaEsDqK8mQ

I think "Muncher" is exactly what we all need in this moment https://t.co/jQrKoTaXgH

Stare into Muncher's eyes and the truths of the universe will be revealed…But sometimes this knowledge can be too much to bear, as Muncher knows all too well. pic.twitter.com/EOo10n4XPX

For all those wondering, this is my son Muncher. We share no blood but he is my life. He came from Cuba (legally, of course) six years ago and lives with me in Florida.

I am so proud of him and raising him has been the best, most rewarding thing I’ve done in my life. pic.twitter.com/BHyxvfL09a

Muncher was the final role for the late Roger Ailes 😞💔 pic.twitter.com/e5pf7iDndA

I feel for this big blue boy. Look into his eyes, twin pools of deep blue despair. Muncher has seen some shit, y’all. And now, even in death, he is mocked and compared to terrible republicans? Tough break, kid. Like it or not, you’re the new avatar for 2021. We are Muncher. Muncher is us. Pull up a folding chair next to Bernie Sanders, you meme God, you.

Muncher is what I’m gonna look like by the time this fuckin pandemic is done https://t.co/jaKRm8kLy5