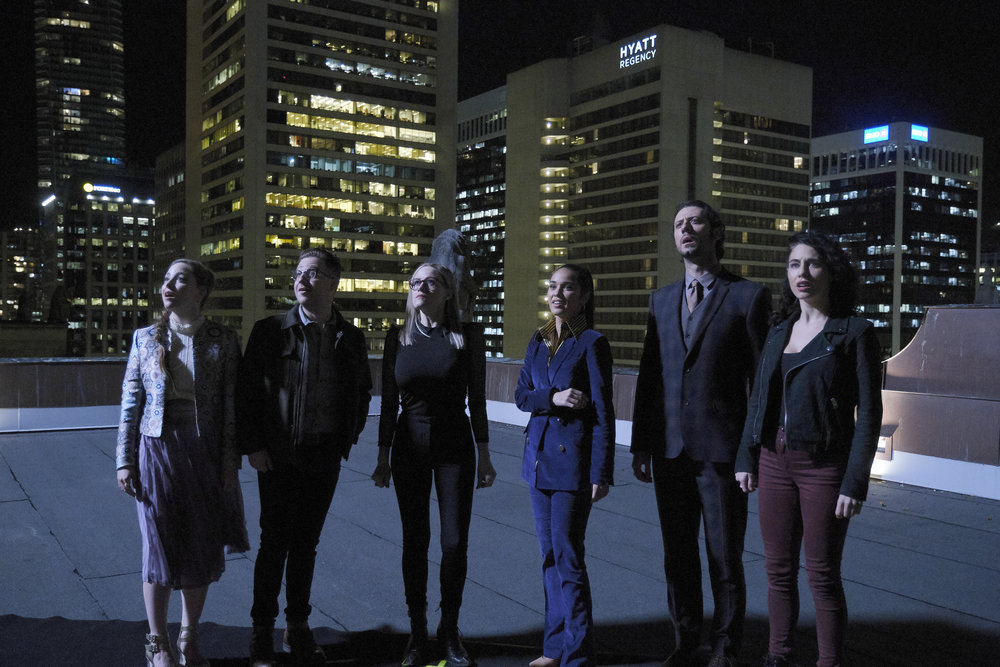 Oh, Syfy’s The Magicians, how I’m going to miss you. What other show could give me a musical episode that starts with a singing man-pig, transitions to an Ocean’s Eleven-style heist, and ends with my favorite sidekick sneaking the loot out in her vagina before the heroes are rescued by Santa Claus?

Just writing that little summary, which barely covers all the wonderful weirdness that went down in “The Balls,” makes me miss the show already. Even in a vast television landscape full of creative, genre-bending shows, The Magicians is so brashly unique and strange, and when the final episode airs next week, it will be the end of something truly special.

The plot of last night’s musical extravaganza was that most of the Brakebills gang had to rob a ruthless pair of magicians called “The Couple” in order to claim a magical object called the World Seed, which can literally grow a new planet. They need that because Fillory is about to be overrun by the hoards of the dead, because the dark king wants to crack open the underworld to see his boyfriend. Simple!

In order to coordinate everything, they cast a spell that allows Marina to “conduct” all of them from afar, but it has a catch: Any time someone gets too emotional, everyone breaks out into a full musical number. So, to keep their cool, Kady, Margo, Eliot, Fen, Josh, and Alice need to bottle up their emotions, in a callback to season one. Everything, of course, goes wrong, and when those emotions get out, we get more musical numbers.

Now, all of this gibberish and, MacGuffins are fun and amusing, but the reason The Magicians has always worked as a show—why it was able slowly to become more and more “out there” as a show until we ended up with singing pigs and vagina worlds—is the deeply flawed, complex, and compelling characters and emotions at the center of everything.

All great television has one thing in common: great characters the audience cares about. Without that, no matter how compelling or creative a show or concept is, it will fail. “The Balls” was a great episode not just because it was a bananas musical, but because the stakes and the story mattered to the characters we’ve come to love.

It was so beautiful to see Eliot and Alice, who have bonded this season over the loss of their shared great love, Quentin, sing out their feelings and grief and heal together. It was wonderful to see Fen, who has grown from a sidekick to a High King to an equal member of the team, step up and be a badass. It was fantastic to see Kady, who has been through so much, cement her place as a leader (and it’s always a joy to hear Jade Taylor sing).

And this episode also showed that The Magicians doesn’t need magic to break our hearts, as we saw in the B-story, where Penny and Julia sought ought Penny’s mom to try to understand how carrying a traveler baby might affect Julia. It was a story about parents and sacrifice and loss that completely wrecked me.

There’s one episode left to air of The Magicians’ final season, and the characters have a lot of crises to handle before the series concludes. From fixing magic, to growing an entire new world, to stopping the Dark King, it all sounds completely daunting, but the gang will handle it in the best and weirdest way possible, for sure.

We’re so bummed that this is the last magical musical episode we’ll see for this unique, heartfelt series, but we’re so happy they’re going out on a true high note.