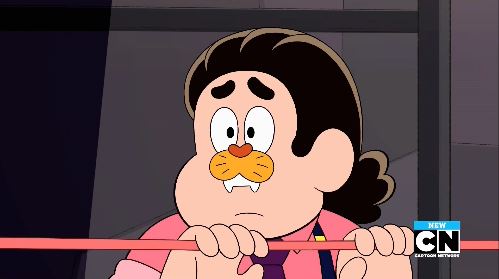 The Recap: Amethyst quits wrestling, deciding she doesn’t need it anymore, which leaves Steven feeling like she’s left him behind too. He tries wrestling solo as “Tiger Philanthropist” to try and cheer up Lars, but winds up deciding to let the sport go with one last match.

I don’t think I’ve ever come away from an episode feeling so thoroughly baffled, readers. When the show started airing, I counted “Tiger Millionaire” as a personal favorite in the first handful of episodes – it’s one of the earliest glimpses we got of Amethyst’s inner life, and the introduction of the possibilities of shape-changing. If you’d asked me then, I’d have been all for a sequel. But that was almost 100 episodes ago. This is a story that belongs in the second season, or the third at a stretch.

It’s a perfectly inoffensive episode, dealing with Steven’s desire to hang out with his cool older sibling Amethyst and also his desire to make people happy, and if you really wanted to stretch it you could talk about the rather well-worn idea that responding to fan input is a losing game because younger fans in particular don’t actually know what they want.  And while I’m not a fan of the sport (performance art?), the board art here certainly seems to depict the wrestling scenes with love, particularly when Puma and Tiger are hamming it up on the mic as heels.

But it’s hard to concentrate on any of that, because…why exactly are we talking about wrestling again? Seriously, I cannot remember a single indication that Steven and Amethyst kept this up over the years, and I’ve been covering this show as long as I’ve been alive.

It’s perhaps cruel to be so flippant, but the good parts of this episode can’t surmount how dated it feels. Yes, it’s nice to know that Amethyst is starting to feel happy with herself, but this isn’t really an Amethyst episode at all. We’re sorely in need of some more time spent with Amethyst (much as I adore Pearl, the ensemble of Gems is getting bigger and they deserve their share of the spotlight), but that’s not exactly what this episode is. She’s too far on the fringes of the plot, while Steven’s insecurities take center stage instead.

Then there’s the fact that this is also kind-of-but-not-really checking in with Lars, while also feeling like it’s gone backwards from where we last left his character. Last time we were literally inside Lars’s head alongside Steven, but now we’re back in the donut shop, with Steven trying to gain Lars’s approval like it’s the first season all over again. The trick to making these long stints between visits with the Beach City cast members work is that there’s a feeling that they’ve been living their lives and growing as people even when Steven’s not around. But it feels like nothing’s changed.

Worse, everyone’s reset. The fact that Lars’s screen time doesn’t end in any kind of real growth feels far more disappointing than it would’ve in the first season, where there wasn’t nearly as large a cast dealing with such weighty issues. Time is at a premium, and we’re probably not going to see Lars again for a while, so bringing him only as an engine to motivate Steven’s in-ring shenanigans feels like a waste.

The final fight itself works well enough; the intensity of the boarding and the performances manage to sell the scene as a closing of a door that really mattered to Steven, even if this important thing has been taking place offscreen without mention for 113 episodes. The puns hung on the challenging wrestlers are cute, with endearingly earnest commentary from Mr. Smiley, and the final moment of bonding between Steven and Amethyst lands. I just find myself wishing we could’ve spent that precious, precious pacing time on something…more. Last week we had the First Good Ronaldo Episode, after all. This really can’t compete with that level of game stepping up.

It’s not entirely clear what’s going on with the schedule from here. Looks like we’re not going into a hiatus after all. BUT! There will be a week off before we get the next new episode, and the show’s moving back to Thursdays. Meaning the next new premiere, “Room for Ruby,” will be out on the 3/16. I can only assume this means one of the squad will be coming down from space, but I find myself slightly concerned as to which one we’ll get. Hope to see you there!

Vrai Kaiser is a queer author and pop culture blogger; they’re sorry this is how break’s starting. You can read more essays and find out about their fiction at Fashionable Tinfoil Accessories, listen to them podcasting on Soundcloud, support their work via Patreon or PayPal, or remind them of the existence of Tweets.