Stan Lee Will Be the 2,428th Star On the Hollywood Walk of Fame 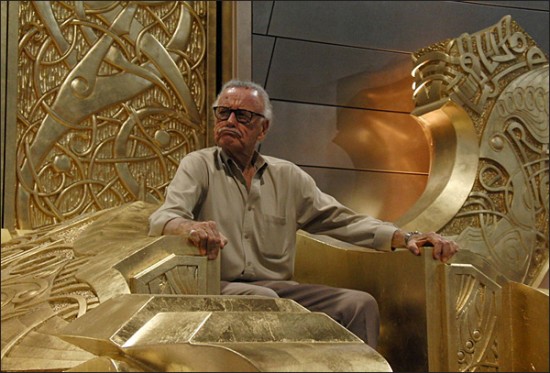 The main man of the House of Ideas will be getting a particular honor next week, when he gathers with guests to unveil his very own star on the Hollywood Walk of Fame.

The Walk of Fame honors five different categories of the pop arts: motion pictures, television, audio recording, radio, and live theater.  Comic books are not among them, but it would be difficult to argue that Stan Lee‘s work hasn’t made significant contributions to the television and movie canons. It would seem that Lee has been nominated for the star on the strength of his television career, as the Walk of Fame press release takes pains to highlight it:

In 1981 Stan Lee transformed his Spider-Man and Hulk creations into Saturday morning and syndicated television cartoons. When Marvel Comics and Marvel Productions were acquired by New World Entertainment in 1986, Stan’s horizons expanded even further, giving him the opportunity to become more deeply involved in the creation and development of filmed projects for both the big and small screen. He supervised such diverse animated series as X-Men, Spider-Man and The Hulk. To date, Stan’s characters have populated over 24 separate television series, all of which continue in syndication around the world.

What, no mention of his superbly acted cameos in nearly every Marvel comics-based movie?

The Walk of Fame isn’t designed to explicitly reward a person for their work in comic books, and so as far as we can tell, Lee is the first person from the comics industry to get a star on it.  Comics aren’t even represented by a single fictional character, which the  Walk does accept from time to time.  Shrek has his own star, Superman doesn’t.

Of course, stars are awarded only to people who will put in a personal appearance at the unveiling.  So… that might have been an issue.