Audiences Are Raving About Zachary Levi and Shazam!

The film is being praised as one of the DCEU's best. 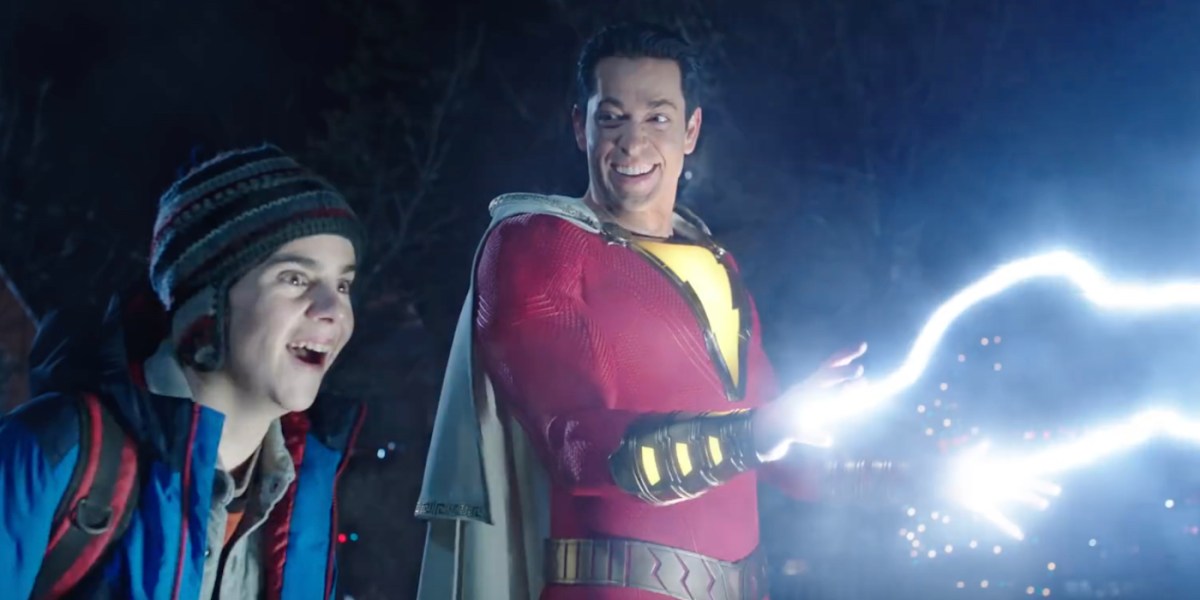 Ever since the first footage of Shazam! premiered at San Diego Comic Con last year, we’ve been looking forward to the family-friendly superhero comedy. And while the character may not have been at the top of our lists for a solo film, the winning premise of “Big with Superheroes” is an easy sell, as is Zachary Levi’s goofy fun performance.

Thanks to advanced screenings, reviewers and fans are weighing in with their thoughts, which have been uniformly excellent. As of now, Shazam! is rated 94% fresh on Rotten Tomatoes, eclipsing the DCEU’s previous top-rated entry Wonder Woman, which sits at 93%.

Shazam!‘s critical success (as well as its projected box office earnings) are part of a new wave of DCEU films that bring heart, humor, and a rich color palette to the DCEU. It seems that with the success of Wonder Woman, Aquaman, and the positive buzz around Shazam!, the DCEU is honing in on what audiences want. Having tried unsuccessfully to build an interconnected cinematic universe, the DCEU is smartly leaving that to Marvel and focusing on strong stand-alone films.

And they appear to have hit the target with Shazam!, if these reviews are anything to go by:

Like Sam Raimi's (still great) first SPIDER-MAN movie, #Shazam is both light on its feet and often cheerfully enjoyable while also quite dark and mournful. It's a lot of fun, but it treats its grim subject very seriously and never sells out its drama for the sake of superheroics.

My spoiler-free #review thread of #Shazam
The Donner’s Superman of our generation, Shazam has so much heart and goes back to the original core of the superhero genre. This movie makes us believe in a world where Superheroes could exist and be loved at the same time. PT 1/15 pic.twitter.com/wh4TFrSPcn

#Shazam is easily the best DC Comics movie of the current editions — an absolute blast from start to finish and impressive balance of fun, heart, and terror. Full review: https://t.co/a2OVm4ojpa pic.twitter.com/LXiSzqx6H2

(I also have to give it up for how well the marketing kept the best surprises under wraps!)

#Shazam marks a sea change for the DCEU. Superb, sweet and smart, this is a BIG feel-good superhero movie you’ll want to see over and over again. My review: https://t.co/sx67TmaFmi via @FreshFictionTV pic.twitter.com/4udQrDC6Bq

I wanna talk about #Shazam all day everyday to anyone who will listen. My heart is still melting. My stomach still hurts from laughing. Can’t wait for you all to see this movie: https://t.co/emrRxeO3Xt way to go DC! Check out my non spoiler bedroom review NOW!!! 💛 pic.twitter.com/FZaGtCcCCf

My Non-Spoilery thoughts on SHAZAM!
SHAZAM is the 1-2-3 punch of the DCCU solo movies, continuing the streak from WONDER WOMAN to AQUAMAN to this fun Big Red Cheese-y flick! @ZacharyLevi @AsherAngel⁩ ⁦@Jgrazerofficial⁩ are all perfect! Will watch EVERY movie in this franchise! pic.twitter.com/q0uYHphqGf

THR's review of SHAZAM!: "(Zachary) Levi is a delight in the central role, hilariously conveying the goofy adolescent within the strapping body of his musclebound superhero." https://t.co/RF3BvLcTd3

#Shazam is total magic from start to finish. The DCEU continues with one of the most fun superhero films ever. @davidehrlich reviews: https://t.co/PlZNqmXu54 pic.twitter.com/Ps6txzwewx

Shazam! is DC’s most joyful and sweet movie since the days of Christopher Reeve’s Superman.

.@AP Film Review: With a terrific cast led by Zachary Levi and a script with heart and charm to spare, #Shazam is a delight, writes @ldbahr. https://t.co/9tWCNnrAN9

Have you seen Shazam! yet? What did you think? We’ll have our review up next week for the film, which premieres on April 5th in theaters everywhere.