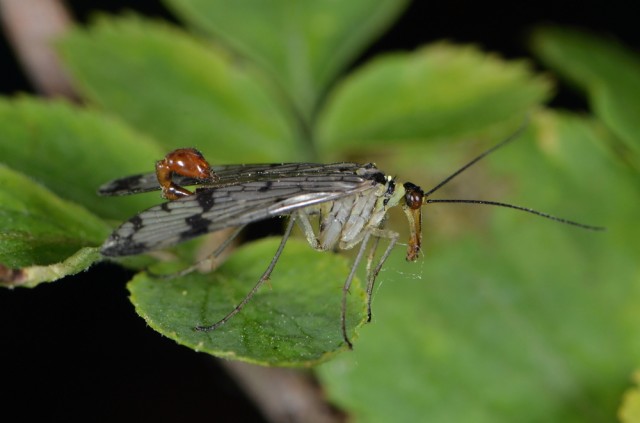 I know we’re talking about flies here, but if the phrase “Scorpion Detectives” didn’t instantly flash in your head upon reading the headline above, then we need to have a talk about how much more fun you could currently be having in your life.

Despite their weird appearance, scorpion flies are mostly harmless to humans. I say mostly because according to new research, if you’re a dead one, these flies will will feast on your abandoned body and perform mating rituals with each other all up on it like—well, like flies do, I guess.

This comes to us by way of a study conducted from the Sam Houston State University in Huntsville, Texas, where researcher Natalie K. Lundgreen had the rare opportunity to perform field tests on a human corpse, rather than the pig carcasses that forensic scientists usually use. Her goal was to confirm which animals and insects would be the first to flock to a dead body left outside in the wilderness, so that investigators could know take samples from the guts and larvae of these creatures for evidence in solving crimes.

Prior to the study, which was released Thursday, blowflies were considered the first to arrive to a corpse, and scorpion flies were only thought to be interested in animal carrion, not that of humans. However, not only were scroption flies there before anything else, they also stayed on the body the longest,

This new knowledge about the scorpion fly, Lundgreen says, is “expanding our understanding of decomposition ecology,” because the data that might be retrieved from such a fly could allow forensic pathologists to accurately determine the time and cause of death of a dead body.

Oh, and for the record? Scorpion flies, sort of like jellyfish, are not either of the things that they’re named after. They’re actually from the Mecoptera order, which is a distinct species classification separate from that of the fly (Diptera). Also, the curled scorpion tail-looking thing isn’t actually a tail; those are the male Mecoptera’s genitals. Have fun thinking about that performing mating dances all over your dead body! Hooray!